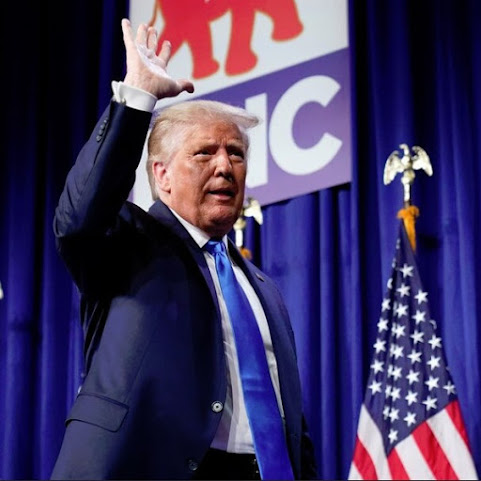 Make no mistake, the GOP campaign for reelection is a high energy affair given their lack of star power . . . Save the Commander-In-Chief.

Accordingly, here's the rundown of first news from "many sides" of the political spectrum as it relates to the official Republican campaign kick-off . . .

WASHINGTON (AP) - Two of the Republican Party's rising stars, both people of color, offered an optimistic view of President Donald Trump's leadership on Monday night, closing the opening night of the GOP's scaled-back convention with a positive message at odds with the dark warnings that dominated much of the night.

A little over an hour into the first night of the Republican National Convention, former Fox News host and Donald Trump Jr.'s current girlfriend, Kimberly Guilfoyle, walked onto the flag-strewn stage and took a deep breath.


In grievance-filled speech, St. Louis couple warn of chaos in the suburbs if Democrats elected

Mark and Patricia McCloskey, the St. Louis couple facing weapons charges for brandishing guns at protesters on their street, spoke on the opening night of the Republican National Convention to deliver a warning.

President Donald Trump appeared in two segments of Monday night's Republican National Convention He stood alongside first responders and then sat with six hostages his administration helped free Both segments were filmed at the White House, while most of the main speeches were broadcast from the Andrew W.


Trump gets Republican nomination and claims election being rigged

President Donald Trump opened his bid for a second term after securing the Republican nomination Monday in typically combative fashion by claiming Democrats want to "steal" the election that polls currently show him losing.

GOP Sen. Tim Scott used his headlining slot on the Republican National Convention's first night to deliver a powerful address sounding optimistic notes about the country's potential while slamming Democratic presidential nominee Joe Biden on everything from his record on race to his vision for America.

President Donald Trump and the GOP will seize the spotlight Monday evening on the first night of the Republican National Convention hoping to convince voters that he will preserve America as a "land of promise" while his rival Joe Biden would be a puppet of the radical left.

Noticed A LOT of rookie mistakes. Obviously not as smooth and TV ready as the Democratic Convention but maybe that's for the best. People might fight the amateurism refreshing.

Thank you for saving me the trouble of watching!

I would imagine that these conventions should get better viewership during the time of coronavirus than at any other point. With fewer options for "entertainment" the literally have a a captive audience.

I still couldn't stand more than 5 minutes of it. Which is 4 & 1/2 minutes more than I watched the Democratic Party convention.

Yeah, there was no hate America stuff in it. No red meat for Demonrats.

Funny, I noticed they hate working Americans very much. And the post office. They are Americans too. Too bad you are drinking so much Kool aid that you can't see it.

The RNC very positive. Great speakers with great
Life stories on what the county and Prez Trump means to them. Watched little of the Dems doom and gloom and hateful comments most of the speakers made. RNC extremely well done! Trump 2020!!!!

All politics is just selling hope and/or fear. Both sides are doing it for two grumpy old men. Wish there were better choices. Hard to believe this is the best we can do.

The Republicans were playing to there 63 million voter,base and Im,sure he will pick up a Few million more. Sleepy JOE has lost and you will see it in the polls in a few months. The Media will lead you along as long as they can. For the ratings. ENJOY THE SHOW.

11:04 Trump hates Post Office management, not the employees. Trump's economic numbers can't be denied. Pre-pandemic this administration had the lowest unemployment numbers, for women, blacks, and Hispanics this country has seen in years. The last thing he wants is a bunch of unemployable, feet-shuffling postal workers on the street. Let's face it, postal employees are poorly trained, do the least amount of work they have to for their pay, and they don't care about customer service. A check for $25B is not going to help that situation in any way without reform.

"Thank you for saving me the trouble of watching!"

I owe you one as I didn't watch the dim's infomercial either.

Kind of pathetic - using the slogan "America - Land of Promise" when all you have to peddle is divisiveness, hatred and fear. There's usually at least an attempt at optimism at this sort of charade.

Guess the GOP's "Shining City on a Hill" has gotten pretty damned tarnished over the last four years.

Why did the GOP remove the pro-life plank from the platform???

They took out everything. Balanced budget. Audit the Fed. The entire party platform has been nuked!

I never thought I would see the day when they would actually stand for nothing. No statement of principles. Zero. I can't vote Biden, but absolutely can't do this either.

And won't the claim that "the Election is rigged" come back to bite Trump on the ass if he wins?
Sounds like he's convinced he's going to lose.

the whole thing is rigged. we lose either way.

Then they celebrated yet another recent adulterer by making Don Jr the key note speaker and letting the other women yell at us.

These fake Christians have got to go. All of them.

Lowest rated RNC convention ever. Nobody watched. Everybody is resigned to the fact that Trump is cooked!

Speaking tonight: Jerry Falwell, Jr. on the logistics of a menage a trois.

Say what you want, I am voting for Trump!

Why are all Evangelicals cuckolds? Roger Stone, Trump, Falwell, etc. Organized religion is such a scam and these rubes fall for it time and time again.

The Democrat Convention smooth and ready? Lol. It was a shit show that even the lefy said felt like a lame, tone-deaf infomercial.

Except for the parade of minority success stories that packed the first evening.

Exactly what platform did Sleepy Joe manage to read to us off the teleprompter?

No one watched the Dems either, really.

^^Well even less watch the repubturds so....

Your ass will be handed to you in November.

Republicans has many young, charismatic speakers. Obvious 11:37 didn’t watch this.

It’s painful to watch Coma Joe. He could drop at any minute. I think they have him shot full of steroids and whatever else to keep him upright. Aside from 47 years as a do nothing doofus, the guy has been a moron even in his coherent days.

As spoken by a big Unemployed Lib, who belongs to the morose party of hate.

What do you worship, Mother Earth? Stones? Clumps of grass? The hypocrisy is amazing.

Only thing weird on here is you. Run to Mommy little scared girly boy.

Well the ratings are out: More people watched the democratic convention than the repubturds. What’s on tap for the cocain convention night 2?