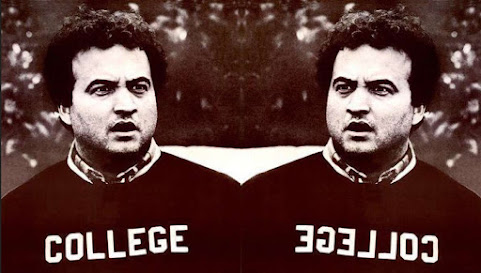 Crying over college parties and spilled beer concerned a great many adults desperately awaiting the return of B.S. jobs amid the growing fear of coronavirus . . .

This pity response angered even more progressives for some reason . . .

LAWRENCE, KS (KCTV) -- A video going viral this weekend shows a Lawrence man as he says he was being harassed and having a drink thrown at his face by KU students. He claims it was the consequence of taking a wrong turn.

As calls continue for the University of Kansas to delay in-person classes, a video making the rounds on social media shows why some are concerned.Video posted to Facebook over the weekend shows a party at a Kappa Sigma fraternity house in Lawrence. In the video, you can see dozens of people are at the gathering.

Hmmm it's as though the virus poses absolutely no risk to students.

Do they still freeze wieners and stick them up their asses for brotherhood ? That is down low bro hood.

Let's hope that he does not put them on double secret probation.

Administration sure in the hell didn't worry about the BLM Protests on Mass Street and the spread of Covid. Was within a few hundred feet of them and there were very few masks, It also was planned by all white kids. Mostly fat , unkept and with dyed hair. Maybe they should worry about all Students and not just the femboys.

DYED HAIR!?!?!? White kids who give a Fuck about black lives!?!?! That's sinful gramps, SINFUL!!! Are you dead yet gramps?

Conservatives crying on blogs all day every day.

KU needs to get rid of frat rats and sor whores.

^^You need to worry about other things. Like how much of your rapidly dwindling life you waste on blogs making stupid posts.

Heaven forbid anyone enjoy life and have fun.

Democrat men are a big bunch of gay Nancy's.

Listen, I am old, but not old enough to forget that is college I had 3 things on my mind titties and beer. Did anyone think a liberated flu bug was going to stop college kids from trying to get laid???????

No, they're talking about Democrats crying. Crying over negative test results, crying over preventable murders of minorities that conservatives keep telling you how to prevent but you won't listen because Democrats profit from minorities being slaughtered.

"Definition of DARVO
DARVO refers to a reaction perpetrators of wrong doing, particularly sexual offenders, may display in response to being held accountable for their behavior. DARVO stands for "Deny, Attack, and Reverse Victim and Offender.""

That's just not true. Not if you think like this, you should read this -

8:15 - Because Trump did not do any of the things you described. I think you need to insert Bill Clinton as he was Epstein's buddy and fellow Pedophile.

Remember Monica Lewinsky? that occurred in the White House with Bill inserting a cigar in Monica's special place.

Apparently, Joe Biden also likes to sniff the necks of young girls which is just as weird.

Definition of DARVO
DARVO refers to a reaction perpetrators of wrong doing, particularly sexual offenders, may display in response to being held accountable for their behavior. DARVO stands for "Deny, Attack, and Reverse Victim and Offender."

Clinton and the DNC colluded with a foreigner to get that fan fic written about Trump, a major FBI lawyer just pled guilty to fabricating evidence to get a warrant to spy on Trump based on that foreign collusion and he still won the election.

Only after he got in could Harvey Weinstein, Epstein and Maxwell could get truly brought to justice.

Obama pped his daughter out to Weinstein, despite everyone knowing the truth. https://www.newsweek.com/malia-obama-harvey-weinstein-accusations-680950

You have to use sexual predator behavior to try and deflect from the plain facts about Democrats. DARVO all day every day for Democrats.

When does Trump get arrested for child trafficking with Epstein?

TOP PHOTO -- ON TAP FOR TODAY

Informed that the last keg was empty, Blutarsky was beside himself!!!

And yet Trump did everything described by 8:15AM. Weird.