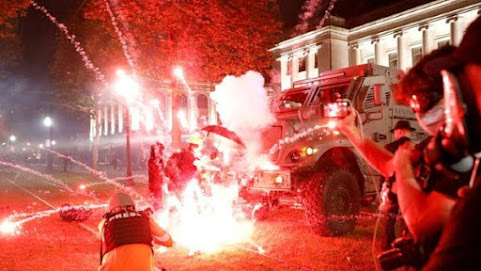 This overnight tragedy is dominating headlines and we'd like to know what our town thinks about it. And so, we're starting our news day with what we know right now about worsening American civil unrest.


Two people are dead and a third injured after an overnight shooting in Kenosha, police say

Two people are dead and a third was injured in Kenosha, Wisconsin, following a shooting late Tuesday night, police said.


'I've just killed somebody': Two dead, one injured on the streets of Kenosha as dramatic videos capture gunman shooting at BLM protesters during clashes with militias guarding gas stations after wave of looting

Three people have been shot, two fatally, after protesters defied Kenosha's dawn-to-dusk curfew yesterday Footage shows a panicked attempt to rescue a man laying on the floor with a gunshot wound to his head Two others were hit in the chest and arm after a crowd gave pursued a man

Kenosha police are searching for a suspect after a shooting late Tuesday left two dead and a third wounded. The fatal violence broke out during the third night of civil unrest since 29-year-old Jacob Blake, a Black man, was shot at close range by officers, leaving him partially paralyzed.


'Three shot' in third night of unrest in US city

Three people have been shot during a third night of unrest in the US city of Kenosha that was sparked by the police shooting of a black man, according to US media reports. Kenosha County Sheriff David Beth told the New York Times that one person had been killed.