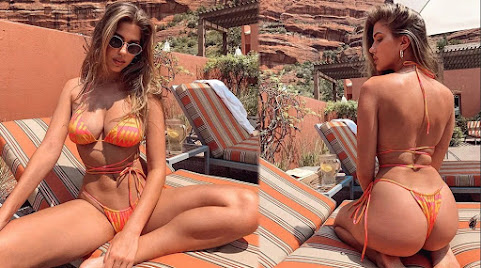 For our most dedicated denizens of the discourse . . . A quick check of pop culture, community news and top headlines . . .

KANSAS CITY, Mo. - Flu season is on approach in the midst of the coronavirus pandemic, but a prominent local doctor is predicting fewer flu cases than average. Dr. Darrin D'Agostino, executive dean at the Kansas City University of Medicine and Biosciences, said precautions against the coronavirus may have a favorable affect against the flu as well.

KANSAS CITY, Mo. - If you've been looking forward to get back to travel, results from a survey released Tuesday by the Greater Kansas City Chamber of Commerce show you're not alone, though not everyone is feeling the same sense of urgency.

The Covid-19 pandemic could result in a significant decline in business air travel - even after the threat of transmission declines.

Kara Del Toro showed fans how she spent a scorching hot summer's day in a new Instagram post on Monday afternoon. The model shared a series of images on her feed in which she rocked a pink-and-gold wrap bikini that hugged her curvy figure and left almost nothing to the imagination.

LeBron James said his "emotions are all over the place" after the shooting of Jacob Blake.

WASHINGTON - In a claim likely to intensify the controversy surrounding one of the most influential figures in the American Christian conservative movement, a business partner of Jerry Falwell Jr has come forward to say he had a years-long sexual relationship involving Falwell's wife and the evangelical leader.

Melania Trump will speak at the Republican national convention on Tuesday night, in the shadow of an extraordinary report that she was taped making derogatory comments about her husband's adult children and even Donald Trump himself.

In Praise Of Prez Trump

President Trump has "always" put the "American people first," former United States Ambassador to the United Nations Nikki Haley told "Fox & Friends" on Tuesday, the morning after she touted the president's foreign policy agenda during her speech at the Republican National Convention.

Van Morrison has denounced the supposed "pseudoscience" around coronavirus and is attempting to rally musicians in a campaign to restore live music concerts with full capacity audiences. The 74-year-old Northern Irish singer launched a campaign to "save live music" on his website, saying socially distanced gigs were not economically viable.

KANSAS CITY, KS (KCTVAP) -- Sporting Kansas City will play in front of fans on their home turf Tuesday night for the first time in months during the pandemic. Only a little over 2,500 fans will be allowed to walk into the stadium. That's compared to a normal game with 22,000 people.

HAVE BREAKING CHIEFS NEWS IS THE TEAM IS ANNOUNCING FANS WILL BE ALLOWED AT ARROWHEAD THIS YEAR, BUT NOT NEARLY AS MANY AS BEFORE JUST MINUTES TO GO THE CHIEFS AN OUNCE CAPACITY AT ARROWHEAD. THIS SEASON WILL BE AT 22% SEASON TICKET MEMBERS WILL GET THE CHANCE TO BUY TICKETS FIRST ON MONDAY TICKETS WILL BE SOLD IN GROUPED PODS.

Trump promised to bring the National debt down in four years; he’s increased it.

He promised to win an easy trade war with China; he hasn’t.

He promised Mexico would pay for the wall; they won’t.

He promised to bring back coal; he hasn’t.

He said that North Korea would give up their nuclear weapons; they haven’t.

He promised that Carrier wouldn’t move to Mexico; they did.

He said that a healthy stock market reflects a healthy economy; it hasn’t.

He promised to bring fresh water to Flint; he hasn’t. He said he wouldn’t have time for golf; he did.

He promised to bring down the prices of pharmaceuticals; he couldn’t.

He promised more people would have healthcare; they don’t.

He promised to show his tax returns; he didn’t.

He promised to bring back jobs, and 51 million people are now unemployed.

He promised that Europe would pay more into NATO; they’re not.

He told the American people that the Covid 19 was a hoax and would disappear in April; it hasn’t.

He promised to give working families tax cuts; he lied.

He promised to give his donors a tax break, which he did.

When will the winning stop???

3:23 grow the fuck up and stop being a whiny bitch. What's the matter, mommy didn't put enough grape jelly on your PBJ at lunchtime?

Fake news in the article about Melanie. Trump never boasted of grabbing women by the p****. He boasted of going in for the kiss right away and then joked about how gold diggers will let rich guys get away with almost anything, using the p-word grab as an extreme example. English is not that hard, people.

So why should we believe any of the claims? There is no good reason.

Tell it to the ballot box.

^^^ Pay no attention to what we actually heard...

Who are you gonna believe? Me or your lying eyes and ears.

Trump's family hates him. Fox News employees, when off the record, say Trump is insane. We all know it's true.


Can't go to church and sing a song but you can go to a chiefs game.

Just look at that Patrick Mahomes. He's is so weird looking. Why doesn't he do something with that gross hair. I can't stand this guy.

This guy won't be in the Demonrat party much longer.

Thanks bandit, that’s a helluva a lot of truth in that speech, he just doomed himself with all those truth bombs and the despicable dimwits will hate him and find a way to get rid of him.

It’s funny that a guy like that hasn’t gotten any air time or national exposure, I’m glad you found this, gave me goose bumps.

The loons will push him out of the party very soon.

OOPS! CNN reported honestly and then turned their honesty back into the usual propaganda.
https://twitter.com/JusticeTristan/status/1298292888590118912

Why idiots insist on putting happy faces on turds is astounding. If you draw a happy face on a turd, it's still a turd. Doesn't change the violence or property at all. My bad! black lives supposedly matter. Sorry, but when they do this crap they don't. They are worth a round or two at best. This stuff wins nobody over to their argument. "Mostly peaceful" my ass!

Here’s a summary of the future vision of Biden and the Democratic Party based on their pathetic past behavior:

- Open borders to all illegals so they stream into our country and then we have to pay for their healthcare, food, education and other needs with higher property, sales and income taxes.

- Weaken the police so crime is out of control in all cities, not just the big ones like it is now where the Dem mayors are in charge.

- Weaken the military so terrorists and foreign armies can more easily threaten our safety, take over regions of the world and kill us.

- Don't hold criminals accountable for their actions and make sure they either don't go to jail or can post bond easily so they can quickly get back on the street and commit more crimes against law-abiding citizens and property.

- Weaken the economy with more industry regulations, like no fracking, and more corporate taxes so fewer people can get hired for jobs and unemployment skyrockets.

- Raise the taxes on our paychecks so our net pay is miniscule so the government can pay for more socialist and welfare programs.

- Let doctors abort babies even after birth if the mother doesn't really want the child.

- Continue with false accusations and endless hearings on subjects like Trump-Russian collusion against the President that wastes millions of American taxpayers’ dollars and takes the focus off legislative focus on the real problems facing Americans.

- Continue to work with the corrupt liberal media to take Trump statements out of context to make him look like a racist at a time when he was the one president to decrease the unemployment of Blacks, Hispanics and many other societal segments to record low levels; has no record of being racist; and gave more aid to Black colleges and universities than any other president.

- Be hypocritical about how well Biden would have handled COVID-19 as evidenced by Biden and/or his staff stating that Trump was being xenophobic by stopping flights from Chinese residents to America early in the pandemic, stating that COVID-19 won’t end up being any worse than the flu, and stating masks aren’t very helpful.

- Keep segmenting Americans by ethnic, gender and sexual preference groups so the Dems can act like they are saviors to those groups when they really are only preventing the idea of one America full of people who have differences but who all love their country.

Everyone knows the Dems are becoming desperate and nervous because Trump is quickly catching Biden in the polls. They need to figure out a way to cheat, since the party has lost all integrity with the false charges aimed at Trump and his staff for four years. They will stop at nothing and believe the end justifies any means to regain the White House. The convention will give Biden a little bump, but then it's lights out unless he shows he can think on his feet and answer tough questions from reporters.

The Durham Report and the Republican Convention might be the final nail in Biden's coffin. Most blacks are not enthused about Kamala Harris, whose relative owned 200 slaves in Jamaica in the late 1800s, and like how Trump lowered black unemployment to record lows. Ironically, Obama still holds records for high black unemployment.

Kamala Ferraro was the last nail in his coffin. The race card gained nothing. In fact, many blacks don't like her.