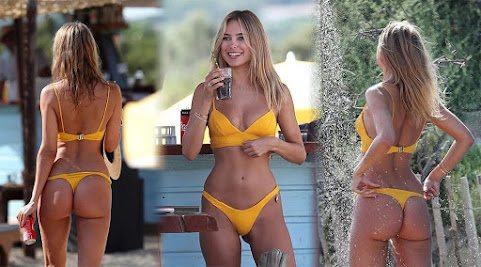 Hottie Kimmie is 29 but that's 72 in modeling years, nevertheless we admire her swagger as she inspires this update regarding pop culture, community news and info from across the nation and around the world . . .

KANSAS CITY, Mo. - The Kansas City Area Transportation Authority is getting a boost from the Federal Transit Administration to the tune of nearly $8 million. Officials announced the grant, which totals $7.98 million, on Thursday. The money can be used to "replace, rehabilitate and purchase buses and related equipment and to construct bus-related facilities."

Recount Across The Bridge

The Clay County election directors on Thursday initiated a machine recount of roughly 44,000 ballots after errors in at least six races from Tuesday's election.

Story updated at 7:24 p.m. Wednesday, Aug. 5: The University of Kansas will mandate that all students, staff and faculty members who are able to return to campus take a free saliva-based COVID-19 test, Chancellor Douglas Girod announced Wednesday. The tests, which will be administered before the semester begins Aug.

She jetted to the sun-soaked South of France last week after lockdown travel restrictions eased. And Kimberley Garner looked as though she was having a ball on her European summer jaunt as she cooled off at a bar on Pampelonne Beach in St Tropez on Wednesday.

Former US First Lady Michelle Obama has said she is suffering from "low-grade depression" because of the pandemic, racial injustice and the "hypocrisy" of the Trump administration. She said managing "emotional highs and lows" required "knowing yourself" and "the things that do bring you joy".

Amid escalating tensions with both North Korea and Iran, President Donald Trump's advisers hesitated to give him military options fearing the President might accidentally take the US to war and deliberately informed their counterparts in both countries that they did not know what the President would do next, multiple former administration officials tell me.


McConnell believes Dems, GOP will reach virus relief deal 'in the near future'

Senate Majority Leader Mitch McConnell would not say Thursday when he expects Congress to strike a deal on a fifth coronavirus relief package, but said both Democrats and many Republicans have a "desire" to boost an economy and health-care system ravaged by the pandemic.


'Who's the Boss?' reboot confirmed by Tony Danza and Alyssa Milano

We are waiting on you, Judith Light. Tony Danza and Alyssa Milano say that a reboot of "Who's the Boss?" is in the works.

Organizers for a favorite Kansas City-metro area family attraction say because of the coronavirus, it's not safe for them to open this year.The Deanna Rose Children's Farmstead in Overland Park, Kansas, announced online Thursday that the farmstead will not open its doors to the public in 2020."The Farmstead is a regional facility that draws visitors from all over," organizers said in a post online.

KANSAS CITY, Mo. - Kansas City, Missouri's sister city in Taiwan presented Truman Medical Centers with a mask donation Thursday morning to help slow the spread of COVID-19 during the pandemic. Tainan is one of a dozen members of the Sister City Association of Kansas City.

KANSAS CITY, Mo. - People aren't the only ones soaking up a little time at the pool this summer. A new exhibit just opened at the Kansas City Zoo, and one elephant is taking full advantage of the featured swimming pool. "He's like any teenage boy.

It sounds like Michelle Obama was sleeping better when Trump had black unemployment at record lows. Her husband reached records for black unemployment four times during his 8 years in office, but it was for record high black unemployment figures. If America were that racist, there's no way her husband would have been elected to office twice and been able to brag about his greatest accomplishment -- bringing unisex bathrooms to more places so creepy men could follow your young daughter into the bathroom.


Well most of us don't give a damn about Michelle Obama she has been an angry women since she and her spinless ISIS loving husband ruined our country. If she is depressed she can go see a doctor or put a gun to her head no one cares.

Trump will start some type of armed conflict or war, and then use Article 2914-2401a to stay as President for a longer period of time. Basically to trash the office and government for the incoming Deomocrats. How many lives of soldiers will be lost in this "tantrum"?

George Soros is Trumps biggest supporter. He is dating Michelle Obama too. George is everywhere. He owns the n95 manufaturing plants. My word!

Michelle said that she was never proud of America in her adult life until it elected her husband president. I wonder if she was proud of what he did to improve race relations and black unemployment.

Who has the fatter ass Oprah or Michelle Nobama? Barry be throwing a hot dog into a tunnel. They are both depressed poor fat ass babies.

Sarah Huckasanders must be thinking about the last thing she got from her daddy. Softballs.

You must have her confused with your son who probably got no balls.

The Kung fu flu spreading ata gets $8 million dollars when it shouldn’t be getting anything, it’s not the top priority and it should be shutdown because of the highly contagious and easily spread virus. No church but by god you can ride the bus.

What’s that idiot the fat fake dr archer have to say about this thing still running?

Pack in tight for those violent protests where you throw Molotov cocktails and bricks at police from behind women on the front lines and then run away like a big pu*sy, but no church for you because that might expose yourself to the evil cooties.

Its too bad that super hottie shares the same name with that fucking, Soros backed idiot in St Louis. She should trademark her name and make the StL CA change hers.