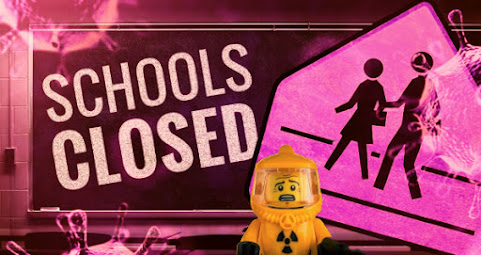 This evening, outcry from teachers tops the news along with a myriad of concerns about the health risks confronting students, teachers, administrators and families . . .

KCUR: Some Missouri Teachers Worry About School Reopening, Saying "There Is No Acceptable Number of Deaths"

BBC: Coronavirus - Pubs 'may need to shut' to allow schools to reopen

SHOULD SCHOOLS REOPEN GIVEN THESE DIRE WARNINGS FROM TEACHERS?!?

As one of the links you shared mentioned, the teachers are also not looking at the risks of keeping schools closed.

^^^ Playing games with teachers lives and student health is not a good look. There are no acceptable risks in this conversation.

OK NO PAY and next years budget is baised off of this year's numbers. LAZY UNIONS.

I still want my property tax refund that goes to funding schools!! You can’t have it both ways!

Today, It was great watching all the kids at the baseball fields playing unmasked.

Another "protest" in KCMO?
Say it 'aint so!
And in a related equally newsworthy development, two elderly women protested at the City Market because the tomatoes they bought were too soft.
Tomorrow there'll be a protest because it's Sunday.
Lots of people with lots of time on their hands and not a clue about how to get things done.

Sure, send email back to school...and the little bastards spread it to their parents who then give it to you.

Well it's not like the kids in Kansas City public schools could possible get any dumber than they are now and the district can't get any worse.

How many daycares and summer camps have been open for last 6-8 weeks? Summer schools? How many have had to shut down in the metro area? If they had you can sure bet they would be lead stories on every news source....schools have had 4+ months to develop a plan....time to go back!

If the African anti-Americans in this city spent as much time actually working instead of trying to get out of work they would have a standard of living that they wouldn't constantly bitch about.

The problem with kcps kids is they live in the hotspot for kc and they bring sickness and disease with them on a normal day so add the Chinese red death virus on top of it all and I probably would look for a different district to work in or a whole other line of work.

In the mean time these teaches are going to the gym, getting their hair and nails done and even driving or riding in cars that present a relatively high risk for injury or death.

Tell Grandma and Grandpa to mask up when they visit the grandkids after school.

And to the teachers, if every retail, restaurant, daycare and essential worker can go back to work, so can you....

Teachers want to keep getting paid and not go to work. Shooooocker!

Our group of friends has had a private tutor for our kids for the last year. She informed us she has had offers for three and four times the pay she is receiving now from our small group, and she can go anywhere in the country, expenses paid. If the teachers strike, refuse to go back to work, or whatever, tutors are going to do well, and teachers can go take a flying leap. I doubt we can continue to retain the tutor, so it looks like the rich Democrat kids whose parents are forcing the lock down won't have any problems with their kids falling behind. At this point, it doesn't matter where you live, your race, or your current socioeconomic status...Private education is going to become a scarce resource, and only for the rich, just like private medicine once this country's healthcare system is ruined even more by Universal Health. Prepare to have the stupidest, most unhealthy kids in the modern world.

From reports I've heard, black kids aren't doing well with the home schooling, so if they're out another semester, they're going to be about a year behind. The people who should be raising hell about this should be the black parents - and they *can* raise hell. And if they cared, they would. Eventually, given the national debt situation,all of that free money is going to dry up, and it doesn't matter who is President. And I doubt that Sleepy Joe will be too sympathetic, given his track record and past associations.

DEFUND THE SCHOOLS !!
The taxpayers want their fucking money back.
No teach-eeee and no coach-eeee……………
equals NO MONEY.
These assholes fucked off from March to May and got full salary. ENOUGH!!!

The elephant in the room is that most teachers don't know shit about much of anything, especially medicine. They just regurgitate what they read somewhere and expect others to accept what ever garbage spews from their mouths as holy writ. They are frauds and as it turns out, they would rather not work for a living either if given a choice. So no, teachers, as a group, are the last people you should listen to.

KCMO Lawmakers haven't been so worried about the accreditation of their Schools and that many Teachers are not capable of speaking English, just slang. On the Kansas side they must not be too worried about all the Child pedophiles and druggie Teachers that they keep hiring. Be truthful on your worries. Their Teachers make the news alot for Worried people. Never good News. In fact, a ped just this week. Accreditation never comes up. Just swept under the rug for a Decade.


Fire any teacher that is against the school opening and get new ones. Teachers come a dime a dozen.

It’s funny that black kids can’t so math until you put money from a drug deal in front of them and bam! They know exactly how much money they made selling drugs, and that’s another thing, they know how to use a scale to weigh things. I guess if they used money and drugs as part of their “learning” experience suddenly they’d be mathematicians! Hahahahaha!

I grew up in the worthless kcps system and have paid the price for it but my wife and I promised ourselves we’d never let our kids set foot in public schools ever so the three of them went to catholic schools and then onto college. Now we were and still aren’t people with a lot of money and we still managed to do better for our kids, if you care enough about your children there’s always a way to get it done.

Private school is the only way for these kids to make it today. Defund the worthless public school system and watch more affordable private schools pop up left and right. Hell the tax savings every year alone would help pay for private schools and keep the riff raff out, sink or swim for those idiots.

Center school district is producing radicals and the free everything movement, the teachers there act like Marxist wannabes and are as anti American as they come. That’s dangerous in a different way, they produce already violent and murderous blacks armed with a real hatred and a destructive mentality hell bent and ready for a whole “new you’re giving it to me or else world”

Several summer camps in the USA (including one in MO) have had to shut down due kids getting COVID-19. There is a severe teacher shortage so teachers are not a "dime a dozen". Many essential workers are not in a small, poorly air circulated room with 25-30 other people. There are many teachers that are saying to open the schools BUT many of "safety" plans are not well thought out. Please look at everyone's viewpoint and research before you judge.

On the Kansas side, Governor "Shutdown Granny Clampett" is at it again. There are almost 3 million people in Kansas. Only 335 people of those 3 million have died of COVID. The flu killed more people in Kansas last year. With the shutdowns, we have destroyed people's lives and financial futures; greatly increased drug overdose, alcohol overdose and domestic abuse cases; caused an uptick in suicides; and forever hurt the development of children's brains – all because of the deaths of .0000112 percent of the state's population … and to keep Sleepy Joe Biden safely in his basement bunker until the election is over.

The teachers will want to shut down schools for flu season if Biden doesn't win in November. Otherwise, they'll happily go back to school.

Cashiers, food service personnel, and health workers interact with
hundreds of people every day. A majority of which they do not know who they are, or where they have been, and no one has any issues. Asked teachers to go to the classroom with 30 kids, the same kids everyday, who you know, will be wearing masks, and distancing it is some how unworkable. Kids are low risk. High risk teachers will have to make a decision just like the high risk cashier, food service, and health workers had to and they are facing even higher risks. Open the schools already. Walmart has an employee test positive they disinfect and move on. So should the schools.