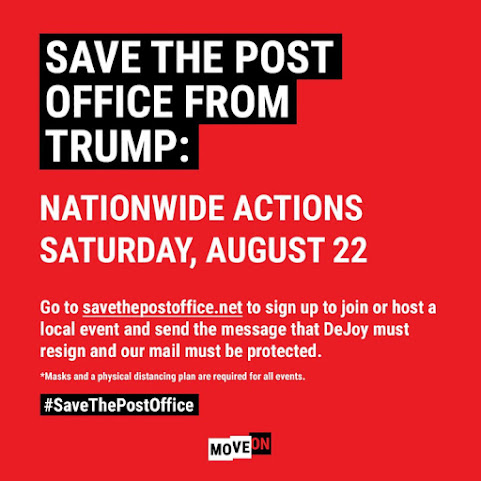 Don't expect a huge crowd today at a rally for the Post Office (ugh) as temperatures soar near 100 and this "controversy" is questionable at best.

"Kansas Citians will be coming together at Union Station to demand resources for the USPS this Saturday, August 22nd at 11 a.m. This protest will be part of a nationwide mobilization calling for funding to the United States Postal Service."

Of course we encourage political activism of all sorts but even the most enthusiastic progressive activists admit that this "crisis" has been a bit overblown.

Is the post office a vital American resource protected by the Constitution? Of course. Long-term privatization efforts are mostly greedy corporate sabotage of taxpayer services. But that doesn't make standing in line for hours any more fun.

Further reading from "many sides" of the debate . . .

TNR: Why the Media Is Uniquely Terrible at Covering the U.S. Postal Service

Vox: Democrats push for $25 billion for the Postal Service. The White House says it will reject it.

Slate: How Much Should You Panic Over the U.S. Postal Service?

I would like to crack down on Trump spamming my e-mail. That would be a welcome regulatory move.

Anyone who believes Trump is taking down the post office (which he should, because it's a money pit) also believes Trump colluded with the Russians. Strange that the only "Russian Collusion" casualties were Russians and an FBI lawyer who modified the transcript of testimony to favor their anti-Trump narrative. They aren't reporting that on mainstream media, but you can read it in the New York Times article here: Ex-F.B.I. Lawyer Pleads Guilty to Doctoring Email in Russia Inquiry

Trump's postmaster made the Democrats look stupid during his testimony, and will again on Monday. Postal Service will prioritize ballots over other mail, postmaster general testifies

But, you all go rally, because apparently blacks can't find mailboxes or post offices.

The issues at the Post Office started long before Trump was elected and with the USPS having a we don't give a shit attitude will last long after the next 10 or so Presidents elected to office.

Like someone said if you think the postal service is so great how about you put $5k cash in an envelope , mail it to yourself. If you don't have the balls to do it, you better vote in person come November.

Money won't fix the USPS, what needs fixing is the lower level management and get an HR dept that isn't afraid to fire bad employees who fail to perform.

Just a continuation of the endless "protests", this one over much to do about nothing.
Equipment is changed out to allow the USPS to handle more packages and less mail, because that's become the regular mix of materials going through the system.
Some "management" changes need to take place, as the USPS loses billions of dollars each and every year.
And voters need to request their ballots as early as possible, complete them, and mail them in.
The notice was that if people wait too late to mail in ballots, their votes might not make it in time and be counted.
Just like EVERY OTHER YEAR.
In KCMO the silly season of marching around,making demands, telling people to resign, and putting on a ridiculous show just never ends.
What are the"activists" going to protest tomorrow?
Surely there'll be some new "outrage" or burning issue.
Hahahahaha!!

The "USPS Conspiracy" is a democrat created fake problem. The USPS while it is a money pit is an essential service. If you don't believe me than wait about 70 days and see how many mailers you get from democrat Political Action Committee's. If you want to outlaw something get rid of PAC's. The United States Postal Service is not a political entity and should not be involved except to move the mail. The "threat" that has been ginned up by the democrats is over a letter sent under the Post Master Generals name is the same letter sent for several of the past elections urging election officials to support mailing the ballots out early enough for people to vote and mail back before election day, that is all. You will soon receive a similar letter to every household from the PMG this year.

If you want to save the friggin postal service privatize it. Anyone who buys it out would get rid of the lazy slackers, bad attitudes, bureaucracy, and cost overruns. It could be run much more efficiently.

@12:47 Hey Bandito, your ignorance is showing. Are there some slackers at the USPS? Sure, just like you when you use to have a job. But the truth is that there are only two premier Postal Services on the globe and one is the German Postal Service and the other is the USPS. It is a logistics giant! It is mandated in the constitution. It is there to provide the ability of citizens to freely communicate. Better than Facebook, Tik Tok, better than Instagram or anyone else. UPS and FedEx and DHL can not legally carry a first class letter unless there is USPS postage applied and "X'd" out and in a package. The USPS is one of the most essential services we have available to us at very reasonable cost. The only problem with the USPS is that congress is the ultimate authority in saying what they are allowed to do and what to charge. Once again the finger of fault ends up pointing to Cleaver and Davids and others as complicit in this organizations problems. I would rate the USPS as 95% in doing their job because I know so many good hard working USPS employees.

Democrats can't seem to get any more batshit crazy until they do. Of course, there are drooling morons who might buy this malarky as just about all Democrats fit that description. OH! and BTW, the emergency bill they are proposing to "Save the USPS"would not become law and budgeted until 2021. The phony lives withing their hearts

It would help if the Democrats would nominate a candidate who still has a functioning brain. If they did, they likely wouldn't have to set up all of these excuses when Basement Biden loses.

"It is mandated in the constitution."

It is authorized, but not mandated.

The Witch from California and the House can vote on this all they want it ain't going to happen.

Look how fast the Witch wanted this to happen but has dragged her heels on all the other important issues.

Post office needs to stand on their own or go under. Our mail person is great but overall they have sucked forever.