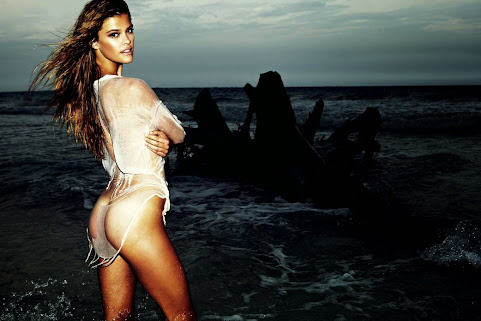 Inspired by hottie Nina, we take a peek at pop culture, community news and top headlines.

A top official at the United States Department of Agriculture (USDA) says the agency is making progress in relocating two major facilities to Kansas City: the Economic Research Service and the National Institute of Food and Agricultural Policy. USDA Under Secretary for Marketing and Regulatory Programs Greg Ibach tells Missourinet the agency continues to transfer [...]

OVERLAND PARK, Kan. - Some Overland park residents have noticed a lawn filled with skeletons and snowmen. At first glance they thought someone was getting an early start on the holiday season. However, it's something much more profound than that. Kenneth Torres, a retired biologist, decided to decorate with purpose.

For the past several years, Kansas City has allowed people to drop off waste for free on Saturdays. But for some reason, people are stopping short of the facility and dumping their trash illegally."I've always been a plants and flowers and garden guy," said Tom McMillian.

Sports Illustrated Swimsuit model Nina Agdal posted a cheeky picture on Instagram during a recent beach trip. Agdal's body was on full display as she posed in an animal print bikini in front of the ocean and stretched her arms above her head. "Don't forget to stretch," the Danish model, 28, captioned the series of photos.

The attacks were baseless, sexist, and utterly predictable. It took less than an hour after the world learned that Joe Biden had selected Sen. Kamala Harris as his running mate for actor and internet troll James Woods to go online and degrade her publicly.

Liberal filmmaker Michael Moore offered a dire warning to Democrats after the conclusion of the Republican Convention, telling the "Resistance" that the level of voter excitement for President Trump far exceeds that for Democratic nominee Joe Biden.

Progressives Slap Fight On The Road To The White House

Progressives have been frustrated by the limits of their political capital - feelings that were exacerbated by what unfolded during the Democratic convention and since. Many questioned the decision to give Republican politicians more air time to present their vision for the country than actual members of the party, including stars like New York Rep.

Facebook Inc Chief Executive Officer Mark Zuckerberg took responsibility and faulted his company for not removing the page and event for a militia group before two people were killed at a protest in Kenosha, saying it was "largely an operational mistake".

"Call it a hunch, but I don't think Melania likes Ivanka very much," one Twitter user joked Against the backdrop of a new book that recounts problems between Ivanka and Melania Trump, viewers were quick to read into a thousand-yard stare the first lady gave after greeting her stepdaughter during the last night of the Republican National Convention.


'Hygiene theater': How obsession over disinfecting can turn counterproductive

KANSAS CITY, Mo. - Clean is the new marketing strategy these days. Restaurants, stores and hotel brands promise employees will scrub and disinfect every surface in sight. The only problem is that surfaces are not the main mode of transmission for COVID-19.

Photo by Zach BaumanAfter the creation of CDs and then later digital streaming devices many thought that the vinyl industry was going to die. The revival of the record industry may be puzzling to some who view vinyl as outdated but the documentary, Vinyl Nation, hopes to explain the value of this old technology.


After rain moves out, look for high near 80 Saturday

Hide Transcript Show Transcript ALMOST INTO PAOLA RIGHT. NOW. HERE'S A LOOK AT WHAT YOU CAN EXPECT WITH FUTURESCAN. THIS IS OUR CURRENT BATCH OF RAIN MOVING THROUGH THERE WAS A SHORT BREAK AND THAT SECOND ROUND THAT TRACKS MORE TO THE SOUTH AGAIN. YOU DIDN'T SEE MUCH RAIN PASSED BY IN NORTHERN COUNTIES.

Turns out people who didn't move to KC from DC ended up sh*t out of luck.

Turns out that everybody who could get another job took it to avoid moving to Kansas City.
And when those Departments move back where they belong the local hires will be the ones who are "shit out of luck".

Someone tell Michael Moore to lay off the potato chips and that most Americans don't want to vote for a political party that thinks it's fine to burn, harass, loot, injure and murder in the name of protests. At the Democrapic National Convention, not one peep from them about violent protests and how they should not be happening. Americans care about their safety and don't want politicians who look the other way when innocent people and property are destroyed by thugs.

Given the choice between the Nina, the Pinta, and the Santa Maria, I like to believe that my forefathers would have ridden the Nina!!!

🤣 Too little too late Donnie boy! 🤣

CNN anchor Don Lemon on Thursday implored Democratic presidential nominee Joe Biden to “stand at a podium in D.C.” and “not in a Zoom thing in his house” to discuss increasing violence in some American cities.

“I think his message would be stronger if he stands in front of a podium, and not in a zoom thing at his house. I’m just being honest,” Lemon said during a discussion with fellow CNN anchor Chris Cuomo.

“Presentation matters,” he echoed. “To come out and stand at a podium in D.C., or wherever, even in Wisconsin, and say — listen, this is what I expected today if they were going to really come out and do the thing right, whether it was going to be Kamala Harris or Joe Biden: ‘Good afternoon, everyone. The rioting has to stop. The violence has to stop. And under a Biden-Harris administration, there will be no lawlessness on the street.’ “

Yeah. Let's listen to the faggot coon and the dago gangster.
Please Biden: Do what they say!!

It wouldn't matter if they come out anti-criminal and pro-cop. The damage is done.

Michael Moore looks like the original "Portrait of Dorian Gray".
His countless self-importance and lies are apparently coming back to haunt him.

1:14 A drug-addled porn performer with a political axe to grind claimed that Trump cheated on his wife with her. A shyster who ended up imprisoned for cheating his clients magnified her claims. Trump denies it. The logistics of it are implausible. Her claims are implausible. None of us know for sure but we definitely cannot accept her claim with any certainty. All we know is that he arranged payment to shut her up and that rich, famous men frequently make those arrangements regardless of how true the claims may be. His giving her money to go away does not imply any guilt.

Trump admitted sex with Stormy Daniels, a sex worker. He used no condom, sometime then later had sex with his wife. He COULD have given his wife an STD like genital warts or Herpes.

^^ Michael Moore looks horrendous. About as bad as Hillary Clinton.

All that internal hate and anger ages Democrats in a bad way.

@ 6:14 - Trump may or may not have banged a chick with gigantic breasts. Being a homo you would not appreciate the temptation.

We do know for sure that Kamala Harris was banging married, 64 year old Mayor Willie Brown when she was 29 and trying to advance her career. That's called being a whore.

Jill Biden was mating with Creepy Joe while she was still married.

Democrat Party's presidential candidates wife and running mate are a couple of whores and adultresses !

Biden's wife is probably banging her college students given Sleepy Joe falls asleep after his applesauce for breakfast.

Trump admitted sex with Karen Mcdougal. If his wife can't trust him, how can the American voters? He lies. Even his sister and niece say horrible things about him. I have seen picture of him standing next to Jeffrey Epstein with his arm around him.