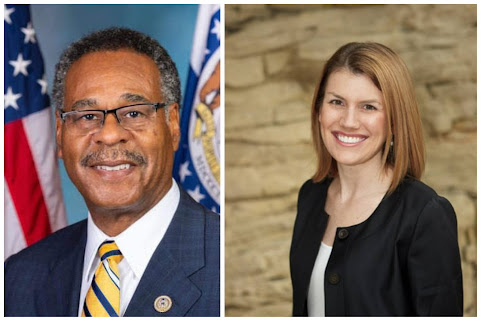 Here's a glimpse at both side of the political spectrum . . . A KCMO Democratic Party stalwart and a Johnson County upstart hoping to unseat an incumbent.

They're reacting to this bit of legislation:

(Washington, D.C.) – Today, the House of Representatives passed H.R. 8015, the Delivering For America Act, with bipartisan support by a vote of 257-150. United States Representative Emanuel Cleaver, II (D-MO) was a cosponsor and voted to pass the legislation, which would provide funding for the U.S. Postal Service (USPS) and prevent the Postmaster General from implementing any changes to USPS operations that were not already in effect on January 1, 2020.

“The Postal Service is a pillar of American society that should never be tainted by partisan politics,” said Congressman Cleaver. “Because of their dedicated service, seniors and veterans receive the life-saving medications, small businesses can affordably deliver their products to consumers, and voters can safely make their voices heard. The American people have made it unequivocally clear that they will not accept the Administration’s sabotage of their Postal Service, and today the People’s House did as well.”

Key provisions in the Delivering For America Act include:

- Prohibiting the Postal Service from implementing or approving any changes to the operations or service levels in effect on January 1, 2020, that would impede prompt, reliable, and efficient service.

- The prohibition would remain in effect during the duration of the coronavirus public health emergency or January 2021, whichever is later.

- Providing $25 billion in critically-needed emergency appropriations for the Postal Service—the level of funding recommended by the USPS Board of Governors, which is composed of 100% Trump appointees

Congressman Cleaver has long been a fierce advocate for the USPS. In April, Cleaver led over 120 lawmakers in urging congressional leadership to including funding for the USPS in coronavirus relief legislation. This month, Cleaver joined over 170 House colleagues in calling on the Postmaster General to reverse policies that have exacerbated a dramatic increase in delayed and undelivered mail. This week, Cleaver joined 65 lawmakers to demand Postmaster General Louis DeJoy provide information on what actions the USPS is taking to ensure the timely and accurate delivery of prescriptions to veterans.

“I’m proud to stand with the men and women of the U.S. Postal Service, as we seek to ensure their phenomenal services continue unimpeded in the months and years ahead,” said Congressman Cleaver. “I would urge my colleagues in the Senate to stand with us by passing this critically important legislation.”
#########

"Sharice Davids and House Democrats are pushing a bill that spends $25 billion the Postal Service doesn't need, operationally ties its hands, and opens it up to frivolous litigation that detracts from its mission. Instead of foisting billions more in debt on future generations to address a fabricated crisis, we should focus on addressing the real issues facing Kansas City families."

We all have an interest in ensuring Americans can securely vote by mail and benefit from timely, efficient mail service. Democrats have manufactured a crisis where none exists, attacking routine operational adjustments. In fact, under the Obama administration, the Postal Service relocated 14,000 mailboxes.

The Postal Service has affirmed its ability to efficiently deliver election mail in a timely manner. H.R. 8015 does not further this goal, instead:

- Opening up the Postal Service to frivolous, costly litigation; and

- Preventing the Postal Service from making any operating reforms, even reforms that would benefit its ability to efficiently handle mail volume.

Amanda is right and as usual the cleave has no idea what’s going on, unless it’s getting a name on a street that has been voted down three times..... you’d think he’d get the message by now that it’s not wanted or needed anymore.

Amanda is WRONG, but the concept of her sucking up does have its own attractions.

Of course everyone realizes that the entire GOP is terrified of the idea of an "unmanaged" election, since they have no record of accomplishment to campaign on. Plus, they also realize that their entire Party has had to tie itself irrevocably to Trump, so they have no alternative but to stand or fall with him, and all the evidence shows him to be teetering quite badly.

The ironic thing is that the Republicans are pimping the idea of "Absentee Voting" among the elderly in what they assume to be their safeholds, without ever mentioning that there is absolutely no difference between the "Absentee Voting" they ask for and that Trump has used himself in all but one showplace Election, and the "Mail-In Voting" they constantly claim to be so open to fraud!

If you don't believe that universal voting by mail will be rife with fraud, the I have some swampland in Florida I'd like to sell you. I am all for absentee ballots, but don't just mail out ballots to everyone registered to vote. Voting is a right and a privilege, BUT you have to put forth some effort to exercise that right!

The Trump voters will go to the Polls and have there vote counted. And the Sleepy JOE voters will mail there vote in and it will be lost and Guess who wins. The Democrats are counting on the mail YOU HAVE BEEN TRUMPED.

They want this. By having a few hundred thousand or even a few million votes cast past the deadline, they can gin up even more fake hate and real violence.

They know they're going to lose. The point is to crack open the nation. Not win elections.

It’s a total waste of time.
It will never pass in the senate and Trump vetoes it.
Grand posturing by the Dems.
Think of all the money wasted on travel and the risk.

Now- think of all the babies and little kids going to bed hungry because Nancy won’t pass a stimulus.
Totally 100% Dems fault as she won’t let it pass.
74% of Americans affected blame Democrats.

Landslide victory for Trump and internal polls reflect.
This info won’t show up in the media.
Why?
Because then more Dems won’t vote and it is even more lopsided.

Watch as more media bankruptcies happen after the election

Once again- symbolism over substance with Liberals.
Pull statues down but let inner city crime happen.

Get the post office funded but let families starve with no stimulus.

I pray for Nancy. May she find solace in hell that she created.


Come November you need to vote Cleaver out.

The blacks are too stupid to do that.

Sharice Davids was making a big stink about the old and veterans not getting thier prescriptions, social security checks ans mail-in ballots. In addition Davids' mom is a Postal worker.
First, the USPS has gone the way of the Conestoga Wagon and the Steam Locomotive, they should either tell them to privatize or be sold off to UPS, Fed-Ex, or Amazon.
Second, 99% of social security checks and veterans checks are Direct Deposit, its illegal to mail narcotics and mail in ballots is so fraudulent I would trust in this crucial election.
Now Davids is quiet and Cong.Clever of Missouri is facing off with a Kansas Congressional Republican candidate Adkins.
Does this kind of sound strange?
I think its time to vote in a Third Party Candidate.

It should be called the Bailing out a Failing Bureaucracy Act.
The post office has losing money for decades. The solution is simple:
increase rates and lower wages. Our local postal carrier said he makes
$500 a day working overtime on a Saturday - that's $63 an hour.

Of course, Cleaver wants to bail out the post office just like the bailout of his failed car wash. Run your business poorly and then get
a government handout. That's how Democrats run things.

THE FARCE IS STRONG HERE!

Cleaver and other Democrats conveniently neglect to mention that the bill would also give individuals the right to sue the USPS. They are much more concerned with steering business to their sugar daddy trial lawyers than fixing the post office.