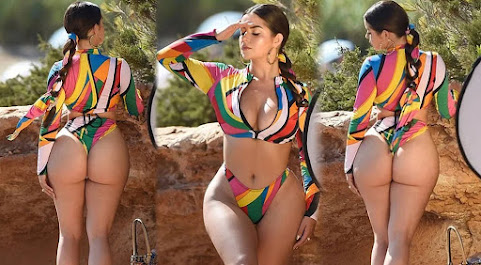 by: FOX 4 Newsroom Posted: / Updated: KANSAS CITY, Mo. - Mayor Quinton Lucas has announced that the city has received $18 million from Jackson County in funding from the federal CARES Act, which was given to support communities through the pandemic.

KANSAS CITY, MO (KCTV) -- Three people are in custody following a shooting investigation that turned into a police chase. Police say they were investigating a shooting in the area of 43rd Street and Agnes Avenue. One person arrived at a hospital saying they had been shot.

KANSAS CITY, KS (KCTV) - Police are investigating after a truck driver was shot at Tuesday morning. The Kansas City, Kansas Police Department said a suspect shot at a truck driver who had just exited off of Interstate 70 onto James Street around 11:50 a.m.

At the beginning of the COVID-19 pandemic, some studies showed that rural and small town hospitals could be overwhelmed in a surge and potentially unable to provide care to all who might need it.

Instagram model Demi Rose Mawby certainly isn't shy when it comes to dishing out scantily-clad clad snaps on Instagram. In fact the 25-year-old babe often leaves jaws on the floor, parading every inch of her body in very risqué attire. The brunette bombshell never fails to disappoint her entire legion of loyal fans with her heat soaring exposés.


Kamala Harris Pick For V.P. Is Hailed As 'A Moment Of Pride' In India

Many Indians are tweeting support Wednesday for Kamala Harris, celebrating their connection to the new presumptive Democratic nominee for vice president, whose mother was from India. Harris is not only the first woman of color to appear on a major U.S. presidential ticket. She's the first person of South Asian descent, too.

President Trump said Wednesday the "suburban housewife" will vote for him over his presumptive Democratic rival Joe Biden -- citing his. administration's efforts to roll back an Obama-era low-income housing regulation that he says Biden would "reinstall... in a bigger form."


No sign of stimulus deal in sight as Pelosi says Dems, White House are 'miles apart'

Democrats and the Trump administration are "miles apart" on the next round of coronavirus relief, House Speaker Nancy Pelosi said Wednesday, as the impasse in Washington threatens to send millions into financial ruin. Pelosi and Senate Minority Leader Chuck Schumer have not met with Treasury Secretary Steven Mnuchin and White House chief of staff Mark Meadows to hash out a pandemic aid package since Friday.

Townies Have Another Reason To Hate College Students

Colleges and universities have long struggled to wrap their arms around the party culture off campus that has resulted in deaths from binge drinking, Greek life hazing and more. If getting students to abide by public health and safety rules when it comes to partying is difficult, getting them to abide by strict social distancing guidelines could prove to be an impossible challenge.

The self-styled "archbishop" of a purported church in Florida that sells industrial bleach as a "miracle cure" for Covid-19 has been arrested with his son in Colombia and faces extradition to the US. Video footage posted to the Twitter feed of Colombia's top prosecutor showed Mark Grenon and his son Joseph Grenon, dressed in blue jump suits and masks, being led away by armed police.

The so-called "last day of summer" is a little over a month away, and received wisdom would have us soon putting away our swimming trunks, deflating the inflatable pool and tucking away our favorite summer friendly brews. But why? Why conform to convention when you can have your beer and drink it too?

It's Wednesday and we're going through some rather typical summer weather around the region. Today though will be the 17th straight day we have average or below average highs. Today's average high is 88° and while close...I don't think we'll get there. We also saw some storms yesterday.

Surge fear but not a single hard number in the whole article. Fear is the narrative and the narrative is fear. It is best to just go along.

Killer curves, Tony? How about just calling it what it is, a big ol' fat ass. Her topside assets will be sagging in just a couple years, better to cover up her stretch-marked belly. Her legs would have to be half the size they are to get a thigh gap without the use of gaff tape, lighting, and angles. Demi is a short, fat cow with huge udders.

Rode by more negroes than the underground railroad.

His he actually trying to lose???