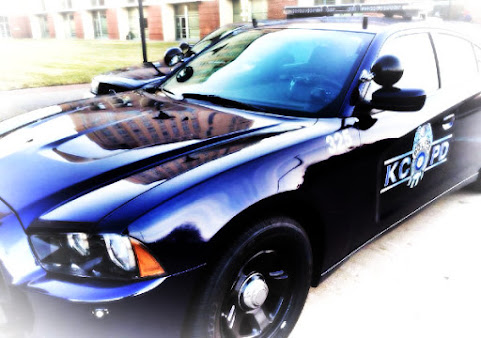 Here's Kansas City police note making it's way through a variety of social media circles to both criticism and celebration . . .

In response to a KCMO vote endorsing Black Lives Matter street murals, local po-po and their supporters are spreading this message . . .

"There were two other requests were submitted on the morning of August 3, 2020 requesting murals supporting law enforcement. To date, no person from the city has contacted those who submitted the Law Enforcement Mural requests.

"The disturbing part is not only was the Law Enforcement Mural request ignored, the other mural requests was fast tracked on a same day vote and passed without any committee hearing and public input. This is the same behavior that was overturned regarding the MLK Boulevard fiasco. The conduct of the council is reprehensible and discriminatory. It is time we stand up tot he blatant disregard demonstrated by the majority of the council.

"There are a few things in the works right now, get the word out and stay tuned."

It would be nice if everyone focused on crime instead of street art. But maybe that's asking too much. Public paintings are a much more fun issue. Just sayin'

Such a superficial gesture. Perhaps balloons would have more of an impact on addressing systemic racism and inequality. Disappointing.

Who are people going to sue when the streets get wet from rain and folks slip and fall due to the painted areas?

^^That's true. It will be very sad when someone slips and falls on the painted letters and then sues the city.

Paint Black Murdered Here in street by each murder. It would help out the paint industry greatly. There are a couple of local paint manufactures bet they would cut Lick Ass a deal.

This is a cheap political stunt that will only breed resentment and anger. Of course, this is what you get when blacks take control. Detroit.

^^^^ don’t worry, they’ll just lay the poorest city workers off for months at a time, that’ll fix everything, stealing money from their poorest employees to cover their failures.

And this is the best they can come up with too. That’s what happens when you let children mind the business.

And tell me why again they need six of these things painted?

How about a line that blacks are not suppose to cross ? Like not killing each other. BLM is the by far the stupidest thing anyone has come up with since the pet rock.

They need to start with the worthless negroes on the Water Dept,those fucks couldn't mix a good batch of grape cool aid

Of Course! Everyone is equal, but some are more equal than others.


This is racism at it's worse. I hope people will take this out on black people who have done this to us. They are an enemy to our country now. George Floyd was not killed by that cop and they know it nor was the cop in the wrong with Michael Brown. These black people have slapped us in the face for the last time. They have gotten by with murder, stealing, robbing, and burning down cities.
Go ahead and paint BLM Marxist crap on the streets it WILL BE DESTROYED.
I'm just so sorry my party freed the so called slaves we should have killed them or sent them back, just like the democrats wanted to do. I will have to say that is something the democrats and I agree with now.


if they ever actually paint the BLM bullshit - if you see it coming up while driving..just step on the gas, and slam on the brakes when driving on it - leave a nice skid-mark on that scam

Pacification rarely works. The council tried to score a few points and quell the loudest voices with an ill conceived plan to put a little paint on the road. The counter protest to this move will end up being more visible, and either they won't get more than one or two painted before an about-face or they'll have to allow every other protest group to claim their own little piece of pavement for their message. The "City of Fountains" has a future as the "City of Pavement Paint".

Skid marks !! As in the joke from back in the day ? Weird

a police officer was just shot in the head by a black man and the council think this is a good time to paint six BLM across town and ignore the police request. KC: fair, balanced, and very chicly updated.

since the legislators and politicians have no idea how to stop systemic racism and crime except to blame the police, do not trust them to make laws or events either.

Newly leaked body cam footage shows that we have another Mike Brown BLM false narrative of racism promoted by BLM that has once again glorified a habitual criminal, crucified the police and caused death and destruction. This all exacerbated by the mob, media and politicians rush to judgement. This time more sinister than before. Death, destruction and ART. What an fn embarrassment and travesty!

rich people do not like paying higher taxes, not necessarily b/c they are ungenerous, shallow, and overestimating their true value, but b/c they understandably do not trust what politicians and legislators are going to do with their money made on the backs of others. And then their collective philanthropy is useless shit.

total garbage. The full video still doesn't justify kneeling on the guy's neck. That's what's wrong with you TKC rubes, you think just some talk show told you something that's it's true.

It takes only a little yellow paint to make it BLACK OLIVES MATTER.

I can't wait until the snow plows come along and scrapes that shit off the streets!

6:38 no one justified the cop kneeling on the guy's neck, but what you think is wrong with TKC rubes is exactly what is wrong with the TKC woke democrat fucks like you that think a blm sticker on their car will help. are all the ails of the black community stemming from the police because b/c some talk show politicos told you so in an election year when they conveniently rather not talk about anything else? Not many democrats in wanted to talk about NAFTA in 2016, just pussy grabbing, despite how many trumptards kept telling the democraps NAFTA was an important issue.

When and where do the faggots and lesbians get to paint some streets? LGBTQ Lives Matter.

why because most of those super duper smart democrat BA educated fucks, particularly the ladies, know jack shit about NAFTA or anything else that really churns the engines. FFS, men get together and come up with things like butyl tape, the best women generally can do is candle making and crafting.

What is wrong with our city council people? BLM “art” using public funds to send employees to supervise the artists?!??!!! Is the council of enough intelligence to realize it will harm all businesses as that action will lower tax revenues for the city? Isn’t the city in debt enough without wasting additional funds? I think we should toss out current city council members! The council should be more worried about cutting expenses instead of increasing expenses! Or is this the magical city council that will imagine dollars falling from heaven to pursue their artistic/political dreams.

I thought these Retards were all moving to Canada after the 2016 election?

Keep Loar on the council. The coloreds don’t like her, so I do. I was not a racist before the criminal in Minnesota died while he was drugged up and resisting arrest, but I am now.

An obvious first amendment violation. They will try to claim it's government speech, and when that doesn't work that it's art not a political message, but they will lose. Let me know if the alternative message group sets up a go fund me page to sue the City.

6:33. Kneeling on anyone's neck is certainly considered super bad optics from the safety of a cell phone and the BLM/media hysteria that followed focused on the conclusion that it just had to be racism. Thank you BLM!

For safety and other reasons, police restrain these druggies with every technique they can muster, because on occasion these hopped up gentle giants can and do get a second wind of adrenaline and cause some real damage if not totally controlled. Judgement call. No time for social worker intervention, however ambulance was on the way due to his observed condition.

The man was a repeat criminal offender, past violence, on drugs, fentanyl, meth, etc. as well as positive for Covid-19 He lied at every opportunity so there was no credibility to his words. He was complaining he couldn't breathe while he was upright long before being on the ground with knee restraint.

BTW, Fentanyl is a central nervous system DEPRESSANT which can easily shut down breathing. Unless the officer cut off his airway (choked) from the front not the back of his throat, the kneeling was not a direct cause of death. In his drug delirium he was already a dead man walking.

Confrontations with habitual violent criminal druggies are not pretty. There is very few professions someone inexperienced can accurately critique the procedures, techniques and judgements, except for the Police, everybody is a genius at that.

BLM has blood on their hands for immediately establishing and perpetuating the narrative of racism and murder by Police on the scale of the Holocaust. Data does not support the magnitude of BLMs claims.

Nothing says "wecome tourists, vistors and conventions" than BLM all over the city. Good luck filling those hotels!

9:05 is actually a sane person, but it does not mean police can not be giant stupid turds like the people they are policing.

9:31 one bad cop versus tens of thousands of doped up black murderers, I’ll take the cop who takes even one of these thieving murderers out any-day. Get mad at me for pointing out the facts but before you do, will you get as angry over the thousands of black on black murders going on in this country? Thought so.

thx 10:08, that was like the most tender moment i have had on this blog.

10:05 sometimes it is not even a bad cop acting like a giant turd, it's just a cop who has had enough shit for the day.

Black on black no longer bothers me at all. In fact, I encourage it and planned parenthood located on the hood. Fewer Bonobos to deal with down the road. So kill away!!!!! Come into the burbs with that shit, and they will see where all the guns really are, waiting.