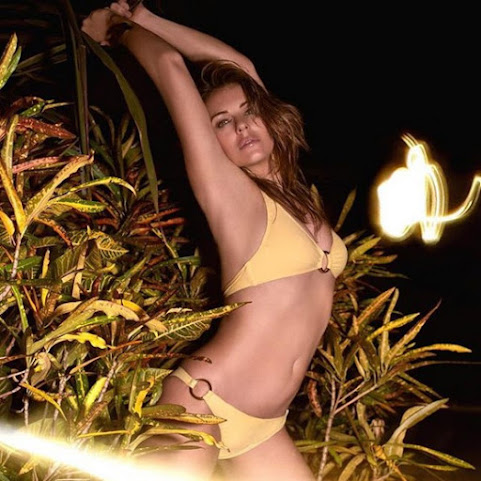 For our late night denizens we pay tribute to the enduring hotness of 55-year-old hottie actress Liz Hurley and then take a peek at late night news along with pop culture, community news and top headlines . . .

(KCTV5) -- There's no doubt about it: 2020 has been a memorable year. And, it's been a strange season for Kansas City Royals fans because they are not allowed in the stadium. One thing that hasn't changed for those listening on the radio is Denny Matthews.

After a few hours of research one quarantined-afternoon, Eric Buckley found a recipe for a 2020 second act: EB's PB, his newly-unshelled company that cranks out custom, premium peanut butter tailored to the tastes of curious customers and nut butter aficionados.

One Kansas City group is doing all it can to help others in other countries who cannot walk or play sports.Kansas City-based Numotion is teaming up with Midwest Adaptive Sports to collect older activity wheelchairs and send them to Ghana in West Africa."They are in desperate need of some chairs," said John Teegarden, of Midwest Adaptive Sports.Teegarden said as many as 15 wheelchairs are being donated and they are not just normal wheelchairs.

Something very sweet is happening right now in Lenexa. Hostess just opened its new innovation lab.If it's possible to improve on a Twinkie or Ding Dong, that's where it will happen.When you think of Hostess, you tend to think of all those tempting treats on store shelves.

A former Liberty University student who played in a band with Becki Falwell's son claims she performed oral sex on him when he was 22, in 2008 The anonymous student was classmates with the Falwell's eldest son Trey The incident took place in the Falwell's home when Jerry Falwell Jr


'Bill & Ted Face the Music' isn't excellent, but it's still kind of fun

To those who might be a little fuzzy on their Bill & Ted history, fair enough dudes, it's been, like, 29 years since the last sequel. Undaunted, Keanu Reeves and Alex Winter party on in "Bill & Ted Face the Music," another adventure in nostalgia that nobody really needed and yet, if not excellent, manages to be good-hearted and reasonably fun.

Rep. Alexandria Ocasio-Cortez, D-N.Y., remains furious with NBC News, saying this week that the network made her "life a living hell" with a tweet that she says resulted in "a ton of abuse" directed at her. Last week, Ocasio-Cortez accused NBC of trying to "generate hate-clicks" with a "blatantly misleading tweet" about her one-minute appearance during the second night of the Democratic National Convention.

LENEXA, KS (KCTV) -- As the Gulf Coast surveys the damage from Hurricane Laura, disaster relief organizations from across the nation are converging to help. On Thursday, KCTV5's Nathan Vickers spoke to local volunteers who are headed south to work in potentially dangerous situations, especially during a pandemic.

Quixotic will be hosting another round of their Twilight Soirée Variety Show this Friday and Saturday at the Westin Hotel in Crown Center. These events follow the sold-out Twilight Soirée shows from the previous weekend. The Kansas City-based performance company has creatively incorporated social distancing measures into their performances.

OLATHE, Kan. - Kansas Governor Laura Kelly has ordered flags lowered Friday to honor Olathe Mayor Michael Copeland. Copeland, Olathe's longest serving Mayor, died Aug. 19 after suffering a medical emergency in his home. He was 58. A visitation is scheduled for Copeland this Friday from 2 p.m. to 4 p.m.

KANSAS CITY, Mo. - Mesner Puppet Theater in Kansas City, Missouri, is producing a new line of educational digital videos and supplemental materials to help pre-K through elementary school-aged children learn how to manage their emotions during the COVID-19 pandemic.

Michael Copeland was a good man. God rest his soul.

Just a reminder why the DVD of the Movie "Aria" is a must have for hetero males.
Good music and full frontal Liz can wear out a "pause" button.

Liz is about 100 times hotter than that saggy-breasted Demi Whatshername Tony is obsessed with.

Liz is beautiful. I mean she is really hot.