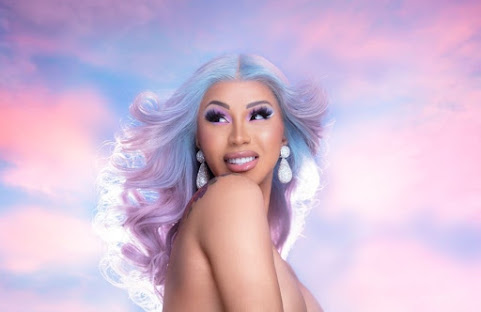 Right now we're inspired by hottie Cardi taking her Internets love to the next level as we review pop culture, community news and top headlines . . .

Tappit technology will be used to enable mobile payments throughout Arrowhead Stadium, home of the Super Bowl champion Kansas City Chiefs, as part of a long-term deal, the company announced Thursday. Tappit is now the Chiefs' official mobile payment solution for the team's app.

OLATHE, Kan. - With practices starting on Monday for some schools, athletes in Kansas are eagerly awaiting the start of the fall sports season. But doctors at the University of Kansas Health System are urging kids who've previously tested positive for COVID-19 to remain cautious even after recovering from the virus.

Local independent theaters are offering online rentals for films they would normally screen indoors. The Screenland Armour theater has started showing movies outdoors, and the Fine Arts Group is soliciting donations for the first time in their 38-year history.

Cardi B's raunchy new single WAP with Megan Thee Stallion is currently making waves all over the world. And one place where the song is doing exceptionally well is New Zealand. On Tuesday, Cardi, 27, responded to a fan account that tweeted that WAP could potentially debut at No.

Democratic presidential candidate Joe Biden is up 49-42 percent over President Donald Trump in a head-to-head matchup, according to a national Fox News survey of registered voters. Nine percent are undecided or back a third-party candidate. Since March 2019, Trump's support has stayed between 38-42 percent, and Biden's lead has been outside the poll's margin of sampling error 16 times.


Coronavirus relief stalemate could drag on for weeks

An impasse over the next round of coronavirus aid will likely drag into the weekend after Democrats and Republicans described themselves as hopelessly far apart on a deal to combat raging economic and health-care crises. Leaders in Washington followed a familiar script Thursday. They indicated the sides have made no progress toward an agreement.

Human rights activists and monitors say there is growing evidence of police brutality against people who have been detained in Belarus as protests over the disputed election continue. Some of the 6,700 people detained since Sunday have been released and allege mistreatment, including beatings. Amnesty International said the accounts suggested "widespread torture".

The past decade was the hottest ever recorded globally, with 2019 either the second or third warmest year on record, as the climate crisis accelerated temperatures upwards worldwide, scientists have confirmed. Every decade since 1980 has been warmer than the preceding decade, with the period between 2010 and 2019 the hottest yet since worldwide temperature records began in the 19th century.


Backers of The Combine Restaurant Have Appetite for Revival on Troost

The Combine, a new restaurant opening at 30th and Troost late next month, is not only a joint business venture, but its owners envision it as a place to bring people together along Kansas City's longtime racial divide.

Plenty of outdoor activities await anyone who is eager to get out and about despite mid-August temperatures in Kansas City. Just keep that mask on. 6 p.m. Sign up to see the historic 18th & Vine District up close and personal with the Be Bop and Beyond Walking Tour by the Kansas City Tour Company.

The warm and humid summer weather continues with highs in the mid to upper 80s through the end of the week Isolated chance for a shower today with the majority of the heavy rain staying west A cold front will move through Saturday afternoon sparking a few thunderstorms Cooler air will settle in by early next week KANSAS CITY'S MOST ACCURATE FORECAST Thursday: A blend of sun and clouds today.

The Fox4 Poll is easy to understand, most normal people prefer Biden, but also think their neighbors are disgusting, so they think, naturally, that their neighbors prefer Trump.

Nasty is as nasty does!
As ye sow, so shall ye reap!

Cardi B is a candidate for a penicillin bath. She is not a hotty by any standard known to man.

Cardi B is a fucking skankass ho!

Kamala "I Slept My Way to the Top" Harris was for sanctuary illegal alien laws that allowed Kate Steinle's killer -- and many others -- to be on the loose and kill innocent Americans. Amazing that a lot of people are blind enough to hand over their money to Basement Bunker Biden.

Sticks and stones may break my bones... but schoolyard bully name calling has become the only Republican tactic when there are no facts to support their "arguments".

True from the very Top to the bottom feeders.

Because the left has NEVER stooped low to insult Trump you guys!

How's your other brain cell doing this morning?

8:19 being a prime example of a bottom feeder.

He owns you, and you can't stand it. Lol

I could care less. I'm living in his head rent free and he can't evict me LMAO

So are we LOAU Bandit, especially as THERE IS NO POST @8:20!
But guess who we're laughing at!

@9:03, we can also remember the eight years of the Obama Administration, and all the fun you folks in the Tinfoil Hat Brigade had, especially the maniac pushing that "Birther" horseshit! You clowns called Obama "everything but a white man"!

Remember, "as ye sow, so shall you reap"!

BFD. Typo. I could care less. Most others do the same. The blog is full of them. Shit happens. Next?

Bandit,one of those words that come from a people of color, the wanna be nazi lives his whites only life in his own mind, unable to understand that the Christ was black, even though the child molesting priest told him different. A fake life for sure.

Thank you. That retarded gibberish puts you back on iggy. My give a damn and English to dumbfuck translator are broken, and the parts are on back order.

You may now resume trolling and stalking. Have a nice day!

FFS Bandit, it's COULDN'T care less. As in, man, I care so little, I could not care any less than that. Make sense, dumbfuck boomer?

Skeedaddle back to the basement and tee up Alex Jones or something.

Why do liberals love Cardi B?

Woman of color
Daughter of immigrants
Uneducated and can't speak clearly
From the Democrat hellhole of NYC
Former stripper
Currently uses her sexuality to make a living
Doesn't use her real name of Belcalis Marlenis Almánzar
Claims gang membership in the Bloods as a teen
Heavily promoted in pornographic music videos to corrupt American youth
She'll probably be invited to speak at the Democratic convention!!!

It's funny to watch him clown-suit you all day, and watch your feeble attempts to reply. Keep it up stalker! Lol

Please people, Do Not! respond to Bandit. If so, you're a stalker.

Let him post his stupid ass diatribes in peace without judgement.

Joe and he ho! https://media.makeameme.org/created/joe-and-the-1494ccf44d.jpg

Gotta love them libtards. They tell you a bunch about who they are by their accusations because it is usually what they are guilty of or what they want from you.

Damn, @1:29 - almost sounds like you're describing Sarah Palin!
You remember her, the $5 Bar Whore who sucked her way up Republican ranks to a VP nomination?

Know throughout her Home State of Alaska as the cheapest hooker with the most calloused knees in town? Screwed anything and everything that could advance her "career"?

And you Trumpsters have the gall, after nominating and still paying any attention at all to that worn out old Whore to criticize Kamala Harris?

was never a Palin fan but 4:40 sure sounds like he's jealous. Not sure he realizes that she lost. People don't vote for VP no matter how lame the Prez candidate is.