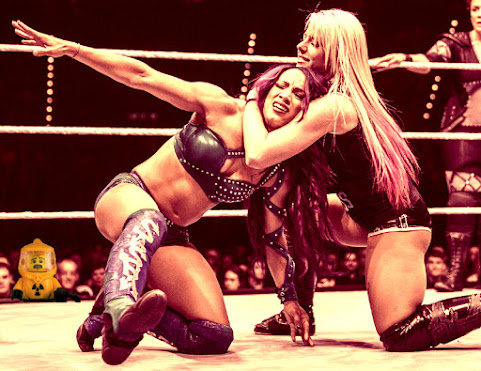 TKC believes that only women's pro wresting is worth risking health . . . However, this weekend there has been a great deal of concern about a student athlete tournament that hopefully won't turn into another local hotspot . . . Checkit:

Fox4: Weekend wrestling tournament draws thousands from across US to Kansas City

"Wrestlers were not wearing masks while competing. Capacity of the arena was limited to only 2,500 spectators, all of whom were required to sit in small groups in the arena seating areas . . . Officers from the Kansas City Health Department could be spotted patrolling the event. Orders from the mayor’s office provided that the health department could shut down the tournament if violations were found."

Absolutely bad idea. Organizers should have been told no. Especially when KC schools are not opening and sports are cancelled as well. No consistency with these rules.

Panic! Panic is the only answer!


So why is this even happening. Restaurants can't even open beyond 50% so why is this? It's a contact sport, restaurants aren't. No one has made any sense since this virus came out. Not the WHO, Dr Fauci nor does Quinton Lucas. There's more to this virus than just the illness. This has a dark agenda.
Please get that Quinton Lucas out of office!

They’re wrestlers, not some pussy soccer players or basketball pussies. They’ll be ok.

I sense another stern letter from Q ball coming with a tantrum to follow.

What we need right now are some sweaty snatch female wrestlers, said no one ever. Weird.

When Ivanka was tagged in to negotiate with the trade representative, she wasn't above using strong-arm tactics!!!

Get out and sign those recall Lucas petitions as there will be forms to sign at this tournament. Today was the first day and many have signed already.
RECALL KANSAS CITY MAYOR QUINTON LUCAS (on Facebook)
8/22/2020 Petition signing and pickup locations and times:
Liberty - old Payless East Parking Lot look for the white canopy and signs see picture for location circled. - 9-11am
Metro North - Macy’s North Parking lot across from the new T-Shots - 10am-Noon
Zona Rosa - parking lot by Michaels. 1-3pm
Northtown - Corner of Vivion Chouteau and Antioch @ old K-Mart Parking Lot - 8:30am till I run out of petition pages.
Kemper Arena at the wrestling tournament that Lucas is upset about

They're fine sharing herpes and ring worm so why care about this?

You hate vagina because you're gay.

Please don't say the V-jay-jay word to me.
I was out cruising the parks until dawn.

It’s funny how the Chinese red death virus doesn’t affect large sporting events, it’s a very smart virus, it knows when you’re going to church or a restaurant to attack you but leave you alone for a large money making event!

Looking at the publicity shot, this match would have been improved by wearing masks - or paper bags!

I really miss the Gorgeous Ladies of Wrestling. Not the Netflix series. The real ones.

Another example of the Marxist Democrat Party creating the Corona Virus hysteria to stage a Presidential Coup in November.

I am impressed that most Americans have finally seen the Communist tactics used by the Democrat Party and CNN.

@7:56, I hope you have a plan in place for moving after the "Marxist Democrat Party takes the Senate and White House in November.

I hear Vladivostok is lovely this time of year, I understand Donald Trump has plans to seek Political Asylum there on November 4th.

8:08 - Dream on. Nobody wants the Marxist Democrat Party that is full of screaming faggots and murderous protesters.

You guys screwed up with your arson, looting, corona virus hysteria as moderate Democrats and Independents will vote Republican or not vote at all.

Republican Party is not that great either but at least it doesn't advocate murder and anarchy like the Democrat Party.

The Republican Party supports law and order and lower taxes which everyone can embrace.


CREEPY JOE BIDEN WOULD LIKE TO SNIFF THESE LADIES SWEATY SNATCHES !

PAID FOR BY THE SLEEPY JOE BIDEN FOR PRESIDENT CAMPAIGN

Amazingly, the one in the headlock looks just like Kamala Harris. Wait a second, is the blonde Kayleigh McEnany?

Yeah, Dr. @9:51, not pussys. When they bulk up, lift weights, it scares the virus away, so face to face spittle not a threat to muscled folks.

Do you have any financial advice?

Michelle Obummer could whip any of these "pussys", while singing "I love America, Now".

12am: You picked #1 white trash hangout spots in every city. Play to the audience?