KANSAS CITY 'DEFUND THE POLICE' PROTESTERS ESCORTED OUT OF COUNCIL SESSION AMID OUTCRY!!! 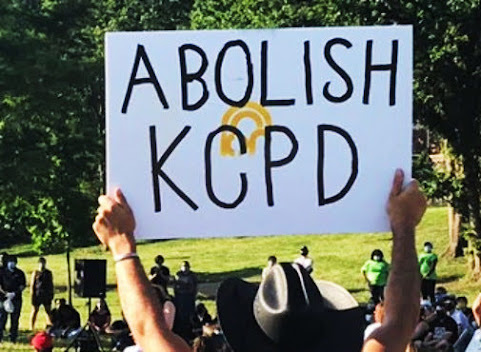 Quick blog note as the ranks of protesters are growing fewer . . .

Near the beginning of the meeting, Sheryl Ferguson, who has spoken at protests previously, and two other protesters interrupted the meeting to criticize the Board of Police Commissioners and tell Mayor Quinton Lucas that people are tired of waiting for accountability and transparency.

“If you don’t want to address the concerns that your citizens have, we will meet you again here next week and we will continue until the needs of the city (are) met by the police force,” Ferguson said.

Another protester asked the council, “Who killed Donnie Sanders?” as they were escorted out.
########

And when was kcpd ever the problem? We haven’t had a bad shoot in a very long time.

Do these people actually think we’d get rid of the cops and are they that stupid to think somehow they’re going to get the money if they got defunded? Seriously people.

Some people just can't figure out when their 15 minutes of
fame" has come to an end.
BLM and its "demands" are yesterday's news.
Now we're into coping with the pandemic and an economic catastrophe for many millions of people.
And in KCMO there are furloughs and layoffs at city hall and a financial meltdown the likes of which has never been seen.
Basic service, already very very poor, are about to get worse and Lucas and the gang are focused on painting streets and their usual childish personal agendas.
Even Gen Grant has had the good sense to disappear.
And still the homicides rage.
Sad.

This stupidity has been allowed to take place curiosity of Mayor Lucas.

was it NWA that did the Killa Cop LP ?

As an added bit of irony she was escorted out by police,

Most of us knew these "peaceful protesters" would eventually run out of steam and interest in their so-called mission to defund and/or abolish the police, their frenzy for local control, and so many other ridiculous demands no one can possibly remember them. I'm really hoping all those folks who marched around with their raggedy homemade signs earlier this summer, screaming and throwing rocks and bricks, looting and destroying property are now gainfully employed and taking care of their families. Unfortunately I'm a realist so...Just curious, does anyone remember Mr. Lucas dramatically waving a piece of paper around in front of city hall, then signing it and declaring he was approving their demands? Wonder how that's working out for him now.

He let them run out of steam.


How funny that these same people across the country who want to abolish the police are the ones who call them to protect their riots.

Abolish these American traitors. Lets run them out of the country.

BTW I know the Ferguson lineage from the United States all the way to Scotland and they were indeed SLAVE OWNERS BIG TIME.

You will see the Burning of KANSAS CITY MISSOURI WILL WHEN Trump Wins.ANTIFA THE people with TRUMP Derangement syndrome. You will see,thousands of Mental Looters. And I am sure The FEDS ARE Expecting this. Your Plaza will be gone .and Midtown Westport .

Eh. Defund the cops. Watch people move away. Responsible companies won't make their employees work in downtown, or will ensure they are safe inside their buildings. People won't move into those TIFF-supported buildings, and those with leases will move out. Enjoy having a Section 8 junkie living next door to you, hipsters. I stopped working downtown years ago (KC still came for my 1%, which I sued them for and won, with my attorney's fees paid - thanks taxpayers). Businesses and restaurants will close or move out. Think of all of the businesses that have left already. No conventions will come here. Should be a blast. Conventioneers mugged on every street, hotel rooms robbed, their cars broken into and vandalized, murder rate to rival Baltimore... Way to go Kansas City! I know you can beat St. Louis! Gooooooo...

Amazing how the paid protesters own no homes or pay property taxes. But want a say in affairs of the people. Instead of defunding police which is being orchestrated by billionaires Ford motor company foundation Carnegie foundation. Bill and Melinda Gates Clinton foundation and other left wing godless demons.

They get their preloaded debit cash cards to run afoul of common sense. How about getting laws changed to stop non judicial foreclosures on homeowners whose home were stolen by adjustable rate mortgages and forged loan documents. This would take integrity and brains.

Many of these foundations that fabricate and fund so called social justice like Ford foundation and George Soros invest billions in mortgage securities that they knew for years the loans were fradulent and bet on defaults by the same banks well fargo citi bank and Chase that screwed blacks causing families to be homeless. They take billions they made in schemes and recycle cash to get folks to destroy black communities under social justice nationwide.same banks stoled homes banks for foundations. Dang...

Darren walker CEO of Ford foundation and George Soros west one bank investor did this.
Look it up friends.

Dummies protesters for blm and antifa do no research on whose behind the riots and looting. How about bringing real lawyers to represent blacks and others over real issues. There playing you bigtime..dang..

All black and hispanic attorneys snatched up asap and hidden in white law firms under promises of cash paying off student loans. Taking them off street to go against crooks that screw over folks. Big white firms decline cases of real folks. Heres the injustice friends not the police.

What about judges lying about where they really live or taking bribes. There's a Jackson county judge living in leawood ks. Standridge with fake kcmo home they don't live in allegedly. Talk about voter fraud allegedly on kcmo ballot and voting allegedly in kansas.

Taxes charged by kcmo for working there by out of State residents. Stop this no accountability of cash.

They should do something about
Anthony Bush city of kcmo attorney allegedly scamming workers compensation funds. Sending over millions to blue cross 3rd party who pays out checks thru commerece bank and refusing accountability to victims and employees of city of kcmo about records of funds.