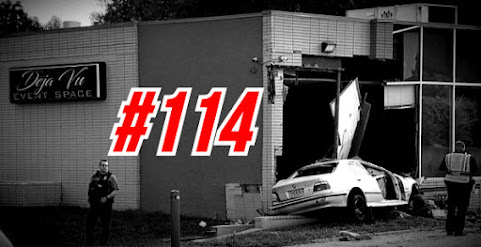 "A man inside the vehicle had died. Because there was extensive damage to the vehicle, crews spent several hours working to safely remove the vehicle.

"After they removed the vehicle, they discovered evidence that shots had been fired into the vehicle. Police also found the man inside had died from apparent gunshot wounds."

Rolling to 150 by the end of the month if things get really bad.

let's hope not. KC is already screwed up enough without becoming fodder for cable news a-holes.


Meanwhile, in the major leagues, Baltimore has 196 murders and Chicago has 456. St Louis has 157. Our all time record is 153. Our Weak-dick hood rats wouldn’t last a day on their streets.

Keep up that great work lowering the homicide rate in Kansas City Q Ball! Are you going for double or triple the record slapnuts?

So are you saying our Hoodie Rats are weak and need to step up the game ? We already have parts of the city in their complete control and no one goes there or any place else after dark. Well, except for the next victims and trendy hipsters blm terrorists supporters that trade drug use for common sense safety. You've deflated our city with your claim.

Where’s Lucas? What’s he going to do to get his murderous people to stop killing everybody, wait, what? What do you mean I can’t say that? because that’s racist? You black people disgust me and the rest of the world.

He makes the same post with updated numbers in a lame attempt to prove that the homicide rate here isn't as bad as it is in larger Demonrat run shitholes and fails to look at the statistics as a whole picture. Per capita we are ahead of Chicago and others. He just wants to go by body count. At the rate we are going that strategy may bite him in the ass too. Wouldn't surprise me in the least if the blm wackos opened fire on a bunch of the whiny white Marxists that have hijacked their Markist movement.

If you took all that money to build the airport and instead hired cops, this crap wouldn't be happening.

Don't talk to me about defunding cops when KC becomes Baghdad. I am sick of hearing that bullshit while we build "super-airport" only the jackoffs at 12th and Oak wanted. Or the toy train.

You get what you vote for you dumbasses.


Dukes of Hazard never lost control of their car and wrecked it when the
Pole-lease were chasing them.

Operation Legend sure likes another epic Trump fail. Doesn't appear to have done a damn thing. Sort of like Trump's response to the Rona.

Except for all the arrests. Have you been doing this long?

Our local hood rats wouldn’t survive a week in Baltimore or Chicago.

^^nor would you. Geriatric fucktard!

I’m disappointed that so many people are still so racist after the events of the last couple of months.

The only thing that the last few months has done is deepened the divide. Demonrats like it that way. You might want to check into exactly how the KKK was formed and which party was behind it. They even had a sitting Senator that was a Kleagle. It's the very same people that are stirring the pot.

Chimpy weird, you're getting too excited. Back to the tree with your momma.

Living rent free in Chimpy's head. It's spacious and he can't evict me no matter how hard he tries!

He's dead, but will still cast ballots in the 2020 election.

Neither of us will care. He'll be dead!

@12:55Pm and apparently he's living in yours as evidenced by your multiple posts about him. Weird. You played yourself. Again. Always.

Again, completely off base. I can ignore him (and do) any time I want. The inverse is impossible for him to do. Absolutely impossible. Go back through the last couple days or more of posts. I'll wait.

Where’s lucass you ask ? Probably in Lawrence taking it in the ass

Or drunk driving though downtown.

Maybe Johnny Miles will want to build a police station there so he can shout down the establishment and grab more taxpayer cash for his raggedy church. Who’s blighting up the hood? Morning Star Baptist church where all the felons attend worship service.