JACKSON COUNTY INSIDER: CONTEST FOR PROSECUTOR CLOSER THAN YOU THINK!!! 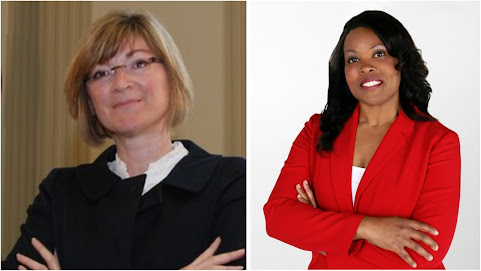 Election aftermath that's worth a second look . . . Recently, a trusted local insider invited us to take a look at returns in the contest for Jackson County Prosecutor.

"Really surprised to see the Republican do so well in the primary but it makes sense. You have a lot of people who are frustrated with Prosecutor Peters Baker and her recent decisions in the face of rising crime. From letting the suspects go after they were caught vandalizing the courthouse to her decision to prosecute police . . . Her popularity is at an all time low and this will be an election where she'll have to campaign. Don't get me wrong, the margins are still in her favor BUT it's closer than anyone expected and in this election almost anything can happen."

A lot of people will consider the alternative. It's definitely time for a chance in KC and Jackson County.

Hold on here. Take a close look at Tracey Chappell. She is not a tough on crime prosecutor. She participated in the riots and thinks JPB prosecutes
too many criminals. Listen to her talk. She can barely put a thought together. She is not a viable alternative to JPB.

@7:11am hits the nail on the head.
This choice is about as encouraging as Forte' v Sharp.
Jackson County residents lose either way.
What passes for local politics/government in JaCo and KCMO is really sad.

Prosecutor Peters Baker has got to go.

What are your sources so we can check?

You must not have ever met Tracey Chappell. She is smart well spoken and how could anyone be worse than JPM.

I voted a straight republican ticket and chapel was the only one on it so imagine how many people didn’t vote for her because she didn’t have a challenger. I voted for her. I normally would skip right over people who are unopposed so many people may I have done what I normally do, she could have a much stronger voting base when the election gets here.

Tracey is well-spoken and smart.
She has my vote.
7:32 is a shill for the Prosecutors office.

Peters Baker is WEAK on criminals. One way to curb murder and crime is to have a prosecutor who won't go easy on violent criminals.

NOPE, JPB sucks. Tracey Chappell is worse. I wish we could get a real candidate in JACO.

thats not Tracey Chappell. We are stuck in Jackson County with two terrible candidates.

Prosecutor Peters Baker should step down and confess her sins of white privilege and what that his brought her. It's time for a woman of color to be in charge!

She’s sucked since she started in 2011, even the commie red star went after her in 2014 for her failed catch and release program and her unwillingness to prosecute murderers. https://projects.kansascity.com/2014/manyprobations/#842436

My only thought is that she isn't as connected to the Democrat party, right? Maybe she wouldn't protect cronies as much? Is that just hope?
From her page, it does look like leftist rhetoric:

Increasing transparency and accountability to reestablish the public’s trust in the Prosecutor’s Office;

Protecting the rights of victims and ensuring their voices are heard;

Bolstering preventative efforts, while working intimately with the community, to deter crime and reduce recidivism; and

Ensuring that charges, plea bargains and sentences are fair and just.

That article triggers Democrats so hard they go apoplectic.

Thousands of minorities have been killed and harmed because of this Democrat policy to put violent convicts back on the streets.

You could pluck someone out of the homeless camp downtown and they would be harder on crime and a better candidate than Baker. She’s pathetic.

The question is going to be what happens when the FOP endorses in this race. I’ve heard their president call JPB a liar several times on Mundo show and sounds like the cops hate her. They have the support our south and East so they could change this race up pretty quickly. Probably depends on how much money they have to spend on the race.

Are the folded arms of Peters Baker and Gardner supposed to make them appear wise and intelligent ? because if it is; its not working.


Wonder how many peters she has baked?

Women by their very nature are too emotional to do that job the way it should be done. This city needs a new larger jail and hard nosed law and order male in that position.

There is not a dime's worth of difference between Chappell and Jean. Here are the responses that each candidate gave to the ACLU. Chappell is in favor of local control. She is also in favor of not working with ICE. One Republican guy I know said he regrets giving her money. Additionally, if you go to Tracey's website pay close attention to her treasurer: He's a Democrat.

Chappell's Treasurer for her campaign is Marvin Lyman. I believe that that the Democrats did not want a primary race. My own Republican friends think that voting for a closeted Democrat is honorable. With Republicans like these guys is why we got Lucas. How's that working out? Same with the prosecutor.

Vote JPB out no matter what. Is her opponent perfect? No, she is not. We need to show the current establishment that we are sick of the anti-police, pro-criminal messaging and have no problem throwing people out of office. The socialist mentality that JPB has displayed over the last 6 plus years is not representative of the Midwest.

Time for JPB to go.

But she has stayed strong to her belief in restorative justice. Which is the problem bigger city prosecutors. It took a long time to get here, but now that it's here JPB isn't going to let it go away, her minions I've invested too much time and money into letting it slip away. Restorative justice originated in the Northeast and has slowly spread like a cancer since its Inception

Marvin is touting only the county numbers. Last I checked the election included both city and county votes.

With Jean it may be a case of likability (many people that knew her before really like the person) versus the effectiveness of and honesty within the prosecutors office. It has been a very, very long time since the Jackson County Prosecutor's office was an open race. The seat has been inherited from someone moving up or out during a term. This has allowed the legislature and executive to decide who sits in the seat instead of the voters. That kind of relationship is a breeding ground for a politicized office and fosters corruption in county government. A close look at her office and what she has allowed on her watch will show some rot.
Jean has talked a good game, but her office has not gotten a handle on violent crime and her progressive pronouncement of a conviction integrity unit is joke that has refused to consider cases of people who have later been exonerated. As a politician she is probably pretty good, as a prosecutor she has mismanaged her personnel and not made us a safer community. It is time the voters made the choice instead of leaving it to the power brokers. I'm voting for Tracey Chappell.

Except for Mao , Hitler or Stalin. I'll vote for damn near anyone besides Petersucker.