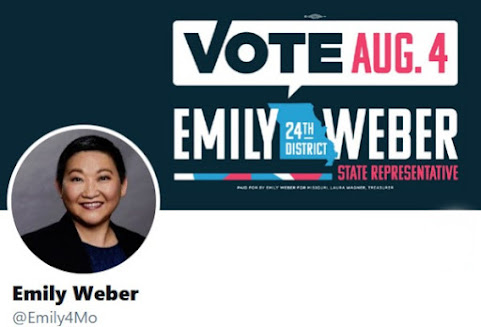 This one is important for a lot of reasons but mostly because this is the Downtown Kansas City to Midtown district Missouri House.

There is little influence in Jeff City with this position BUT it's a great bully pulpit for the Kansas City Democratic Party loyalists.

Late night conclusion that only our mostly loyal Midtown readers will understand . . .

THE DEFEAT OF THE HIPSTER DEVELOPER PROGRESSIVE IN FAVOR OF THIS ESTABLISHMENT DEMOCRATIC PARTY LADY MIGHT SLOW REAL ESTATE SPECULATION IN & AROUND THE LOOP!!!

Either way, we expect to hear more from this office in the near future given that Rep. Judy Morgan had a more subtle style of leadership.

"Tonight Kansas City has voted for progress! I’m honored by the number of KC voters who put their trust in me by making me the Democratic Nominee for the 24th House District. I’m excited to serve and bring my perspectives as the first Asian American woman in #moleg! #TeamEmily"

I'll miss her. She looks like a very bright person, now we won't see her for another 4 years just like the last state rep. Sad.

And she will lose.

^^^^ Not from around here? KC hasn't elected a Republican to this position since NEVER. Sorry.

If pro corporate welfare Democrats lose the developers will have to pay more to buy Republicans.