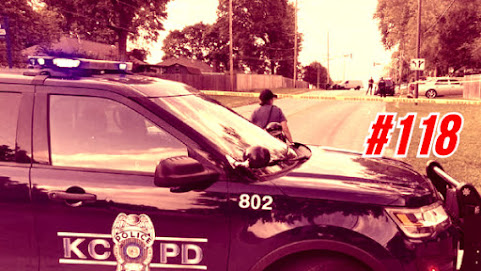 "Two people are dead after a shooting in the 11200 block of East 47th Street. Kansas City police were called to a shooting just before 6 p.m. on Saturday. Officers were able to locate two men deceased from gun shots in the back of a residence."

But I thought the President was going to solve the murder problem. Thought it ended "right now" when he was sworn in. I guess he was wrong.

Will there be a protest and a march in this location? Or is that only for Overland Park?

I know people will say this is the "hood" but it's actually not that bad of an area and a lot of families live on this block. Really sad they had to be in the vicinity of this kind of crime during the afternoon.

8:20: Trump’s fault? Do you suppose the shooters had any responsibility in it? I’m guessing, in your mind, depends on their
persuasion.

^^ Next 820 will blame the weapon for the Killers action. It's the game of a person that can't admit their buddies are nothing but murderers.

I'm sure Ad Hoc, 100 Blue Hills Dads, Aim For Peace, Mom's Against Guns, Urban League, More2 and the rest of the black grifters will do all they can to see that police get all the help and tips needed to bring the shooter to justice.
Candlelight balloon release with everyone wearing RIP tshirts in 3...2..1

Meanwhile, in the major leagues, Baltimore has 202 murders and Chicago has 464. St Louis had 158 as of Aug. 6. Our hood rats are inept and unmotivated.

Did The Police or White Power structures cause this double homicide? Was it JC Nichols or Did Andrew Jackson sneak away from the courthouse and commit this crime? I’m trying to figure out the perpetrator of this crime.

We need to get those murals on the streets now to start saving lives !! We need less Police! We need more community leaders ! We need Biden, We need a black VP pick ! Reparations! Marches through the suburbs ! White Guilt! Police are killing thousands of unarmed blacks every year right ?!! Call to action people ! Get your little black heart and put in on your JOCO lawn now to start saving lives!!

If you don’t a agree with me then your a racist !

We need to give the BLM supporters more free shit for their good behavior. Maybe then they’ll stop killing people.

It was SLAVERY. Slavery makes 100 plus black killers in KC commit their evil. No other race was ever slaves in History, no one else is constantly excused for their behavior. True Dat. Speaking of ME2- how is that ELLEN Doing right now? If she was a straight male, bitch be gone.

Our hood rats are lame indeed. A Kansas City hood rat can murder a rival hood rat without any fear of consequences Thanks to incompetent Jean Petersucker Baker and the liberal fag judges. St Louis tied our all time record by July 31.

Other celebrities are coming to the aid of poor Ellen Degenerate because she's a Democratic lesbian, so she'll probably be fine. If she were a straight white Republican male, she would have been axed a long time ago.

I think the first post in this thread is just about the most stupid I've seen.

The President has nothing to do with our Mogadishus, fostered and supported exclusively by dimocrats.

They have fooled the black community year after year solely to secure their votes with gbmnt handouts, which will NEVER offer a path to prosperity.

Once the election is over, it's back to taking them for granted til the next voting season.

Slavery was happening centuries before it took place in this country. So the current claims about it are stupid. Slavery in the 21st century continues in North Korea, Eritrea, Burundi, the Central African Republic, Afghanistan, Mauritania, South Sudan, Pakistan, Cambodia and Iran. But nobody gets their panties in a twist over that. Oh and Native Americans also owned slaves and owned black slaves later on after coming to this country. Oh and it was blacks who enslaved African blacks to be sold as slaves to begin with. If thses black people hadn't captured blacks people and sold them off there would not have probably ben very many slaves in Amrican to begin with.

So you see in short black don't give a good god damn about other blacks as they'd sell one another off for slavery still if it were to be legal again I bet. They damn sure don't have any issue killing one another in large numbers.

It’s all good, it’s just black boys being black boys, they didn’t mean it, I forgive them........ hahahahaha!

What does Trump have to do with this? You really think one person can solve murder problems? Especially in the whole United States? That's a hopeless cause. Rip young men.

And you're an idiot.

Well Trump said he would solve it. I guess that was just another stupid Trump lie for his slobbering idiots.

So send in Trump's Feds to solve the crime! The Feds have already arrested 100 people, was it the wrong 100?

C’mon man -we’d be at 150 without the 60 gunslingers already pulled off the street-let the adults weigh in and come back when you’re more educated.