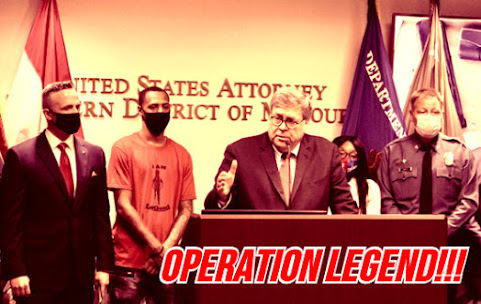 The DOJ boss offered some encouraging stats today in a presser that was covered by media in Kansas City and throughout the nation .

Arrest totals related to homicide cases were the main talking point. Meanwhile, this cowtown continues to endure a murder spike over last year at a rate of 34.78%.

Sadly, just a few moments after the presser, authorities report another dead body located under suspicious circumstances in the Northland.

Nevertheless, the politics of Operation Legend are important inasmuch as protesters are forced to confront contradictory opposition to desperately needed public safety resources in the urban core whilst right-wing skeptics contend with their reactionary opposition to investment in community outreach and inner-city involvement.

Fox4: With AG Barr in charge, Operation LeGend will continue until KC crime drops, he says

Here's the whole thing for those who want to take a closer look . . .

In fairness, here's the word from the Feds without any commentary:

“Operation LeGend is working,” said U.S. Attorney Tim Garrison in introducing Attorney General Barr. “In just four weeks, it has resulted in the arrests of 18 homicide suspects and the seizure of over 70 illegal firearms. In June, Kansas City had more than three killings every four days. Since our announcement on July 8, that rate has been reduced to fewer than three killings every five days. There is much to be done, but to use the parlance of our day, we are flattening the curve in Kansas City.”

“We are grateful here in Kansas City for these additional resources,” added Garrison, who was joined by U.S. Attorneys from across the United States who have launched Operation LeGend in their districts, “and we are gratified to see Operation LeGend expand to other cities represented by my colleagues here.”

Since the operation’s launch, there have been more than 1,000 arrests, including defendants who have been charged in state and local courts. Of those arrests, approximately 217 defendants have been charged with federal crimes. These numbers exclude Indianapolis, whose operation was just announced last Friday. In addition, nearly 400 firearms have been seized by the Bureau of Alcohol, Tobacco, Firearms and Explosives.

The Attorney General launched the operation on July 8, 2020, as a sustained, systematic and coordinated law enforcement initiative in which federal law enforcement agencies work in conjunction with state and local law enforcement officials to fight violent crime. The initiative is named in honor of four-year-old LeGend Taliferro, who was shot and killed while he slept early in the morning of June 29 in Kansas City.

- 20 defendants have been charged with being a felon in possession of a firearm;

- 17 defendants have been charged with drug trafficking;

- Four defendants have been charged with being a drug user in possession of a firearm;

- Six defendants have been charged with being in possession of a firearm in furtherance of drug trafficking;

- Four defendants have been charged with being in possession of a firearm in furtherance of violent crime;

- One defendant has been charged with being a felon in possession of ammunition;

- Three defendants have been charged with armed robbery;

- One defendant has been charged with carjacking; and

But I thought violence was going to end on day one of Trump's administration?

More police and arrests are exactly what KC needs and that's what's happening now. It's a much better strategy than kneeling to rioters.

^^^ yet the murder rate is still going to set a record this year. Weird.

And we are happy about it too! More dead hoodrats is a good thing don’t you think.

Operation legend is capturing all of petersuckers failures, it’ll take some time, a lot of time to catch ten years worth of “paroled murderers” from Petersucker but that will put a huge dent in the future crimes that our black mayors couldn’t handle. It’s a win win!

And don’t think for one minute Petersucker isn’t being looked at either, you haven’t heard a word out of her in weeks now, she’s scared to death of going to prison!

Gee look who isn't in the picture. He claims he wasn't invited, makes you wonder if that was true or the fact that others as many who live around here are seeing Lucas for what he really is.....irrelevant.

But then maybe he was to busy running around shutting businesses down for so called mask violations.

Putting people out of work seems to be the one thing Lucas is good for.

I call that a super success. Be even better had they shot a few of the losers fucks. Then again, I am not a loser druggie wastoid that needs drug dealers.

Anytime vermin is removed from the streets it's a good thing. Q Ball isn't doing jack shit to solve the problems aside from babbling on Twitter to Gingrich. He even got his ass handed to him there. Fucker needs to resign.

The feds are in KCMO to investigate and try to help bring some past crimes and homicides to a head with charges, prosecution, and with any luck, FEDERAL convictions and sentences.
Given the anarchy and carnage taking place in the city, maybe they should move here permanently.
The only people who are going to bring the homicides under some semblance of control are what passes for "leaders" in the black community where over 90% of them take place.
And that gang is way too busy inventing new "programs" and looking for "funding", renaming streets and fountains, shaking down corporations and governments for money, making excuses, blaming everyone but the perpetrators, trying to use what passes for BLM locally for their own selfish purposes, and making uninformed "demands" so that they can make believe they actually have some clout and are going to run everything.
Not surprisingly, the homicides in east side neighborhoods continue.
And the regular hard-working people who live there trying to earn a living and raise their family in that community with some minimal degree of safety are left to fend for themselves.
And Lucas and the council continue to be mere observers.
Sad.

Compare the trends between the Democrats and Republicans. Republicans move to enforce the law, which increased day one. Violent crime went down, as did overdoses - a first in 40 years.

Then the lockdowns hit and the riots were fomented.

And thanks for sharing, Baby Burt. Your opinion means... absolutely nothing.

I’m watching the DNC convention and it’s been night after night of a BLM, Racist, Sexist America they think they live in...... Please move out of the country if you hate everything about it!! I like Joe Biden .. he’s just too old and out of it. He being used like Weekend at Bernies !!!

In regard to this post .... Retarded Liberals have to understand the Feds can’t stop future crimes . This is not the movie Minority Report.

Imagine how much worse the murder rate would be if the feds weren't here actually solving and prosecuting crimes.

Imagine how high our murder total would be if our worthless hood rats had any skill whatsoever. Baltimore has 208 murders and Chicago has 483. St Louis has 169. Our worthless, weak hood rats wouldn’t last a week in those cities.

Imagine how much better things would be if Q Ball and JPB actually did their fucking jobs.

Yet the murder rate would be even higher in KC and other major cities if not for Donald Trump and William Barr. It's good to have a law and order administration rather than people who can't even denounce violence in the streets and are letting idiots destroy great American cities one at a time.

That's right. It's the President's and the AG's job to handle crime within cities. Where the fuck do you go to school? MORON!

Sleepy JOE has been Trumped again. The Majority of Voters want The Criminals off,the Streets and out of there communities .And It's going to Happen in November. THE PEOPLE WITH TRUMP DERANGEMENT SYNDROME. WILL take to the Streets and Loot,and riot.AND QUINT,WILL BE HOLDING THERE HANDS WITH A MASK

^^You encapsulate what being a Trumpkin means. Retard.

Perhaps the finger should be pointed at Mean Jean the idiot non prosecutor. The Feds are willing to prosecute. Was that the difference here with the Feds being here? Or is this an indictment on the KCPD which only solves half the murders here?

Watched channel 9 tonight, Matt Fleener got his ass handed back to him by AG Barr on a stupid question. I haven't laughed so much watching news in a long time. Stupid cocksucker.

After listening to his answers we should all be able to conclude: AG William Barr - What an asshole.

There should be no disagreement on that point.

Our country is polarized and broken because over 50% believes such a disagreeable, combative, stubborn official shouldn't be in public service; and the other "silent majority" under 50% thinks Barr's dismissive trolling is awesome and applaud him precisely BECAUSE he's an asshole to the press and owning the libs.

Again, What an asshole.

Wow, a little pushback bothers you. Take a pill.

In the meantime, AG Barr is tremendous.

Sorry don't need drugs, therefore don't need to attack people that are rounding up career criminals. ACLU mad as the baby mommas. Deal with it . Many replies above really state " I am a career loser, we shouldn't get arrested for being a criminal." let's blame all others instead....Weird as wearing Haynes on your head.

8:55: Could you cite some Constitutional or legislative evidence to support your statement?

Ya think Barr cares about KC? I'm all for busting bad hombres but...

Q is not there for the photo-op because this is a Republican pre-election political stunt for votes. Orange Man tough on crime...blah blah blah. After the election: crickets.

Compare and contrast murders and violence
-on the side of the state line that coddles rioters,
-to the side that actually enforces laws when protestors start behaving outside of their constitutional protections and infringing on the rights of others.

You elected him. Keep him and your rioters on your side of the state line.