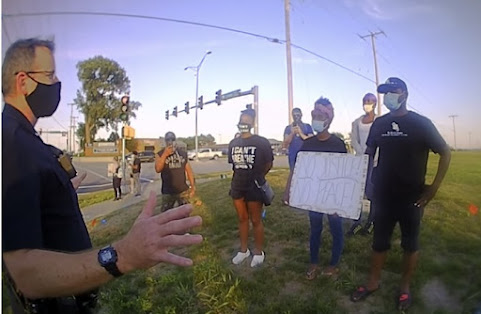 Legal eagle outrage in the golden ghetto where fear of persecution among the middle-class is rampant . . .

"We’re calling on the Overland Park Police Department to answer for its excessive, militarized response to a peaceful Black Lives Matter protest and for its suspension of the requirement for officers to identify themselves."

OVERLAND PARK, KS The overly reactive and militarized response of the Overland Park Police Department to recent, peaceful Black Lives Matter protests is cause for serious concern, the ACLU of Kansas noted in a letter to Department officials this week. Police appeared at the peaceful gathering in riot gear. They targeted protest leaders and hid their badge numbers from community members, refusing to note even which body they represented.

“We have received reports that your department responded to the protest in riot gear, authorized officers to withhold their badge numbers and other identifying information, and targeted protest leaders with harassment and arrest,” the letter, addressed to Chief Frank Donchez, said. “This conduct raises serious constitutional concerns and undermines community trust.”

The hiding of badge numbers was of particular concern.

Fuck the ACLU it’s out dated... People of color, and every other group does not need representation. It’s segregates they from society more !!! Nobody needs leadership as a group ! Americans will not treat anyone equal until its equal !! Fake equal doesn’t count !!

If you don't like OP, don't go there. Problem solved.

Same BLM group that “peacefully” protested in Lib cities? ACLU is trying to justify their existence. Ayatollah nailed it. Mature adults don’t need to be represented by anyone.

Of course they would complain, god help us all if they found something truly worth fighting for. Instead they piss and moan about the mean ole police doing their jobs and doing exactly what the citizens wanted in this stupid situation.


Get these protesters out of your city. They are liars they have not been peaceful. If they can terrorize your city with so called peaceful protests then you can counter protest. That is your constitutional right. Put a stop to this NOW! It's nothing more than racism and hate. Black people have been spoiled in this country long enough.

When OP tolerates people who threaten to take homes away from their rightful owners over reparations they have absolutely nothing to do with, they should expect a very pissed off community. Getting the ACLU libtards involved and letting them push a BLM agenda just makes it 10x worse.

Keep it up OP and you will look like Killer Shitty - everyone heading out of town somewhere else, not willing to live under that shit. You'll get a real border war.

keep it up opks stop the bitch stacy shaw

The ACLU has their panties in a wad again? That same bunch defends terrorists. Oh, wait... they are defending blm. That was redundant.

BLM is determined to turn everyplace they travel into the shithole they are used to living in. They are a terrorist organization. One of the head negros on Fox last night said he wanted nothing short of white people cutting him a check. Time to cut this cancer out of our communities the hard way or the easy way.

You are an incoherent cunt.

Next time set a higher Bail,SO if there is a Lawsuit it will help pay for it. Where is the A.C.L.U.when independent Journalist are arrested.

Next time put the assholes under the jail not in it.

Turn Detroit into a penal colony and ship them there.

^^and you’re powerless to do anything about it. Weird.

Waters said to go where Trump cabinet members are and make them feel unwanted. Not wanted anywhere. Sounds pretty genocidal, to me. Looks like the DNC stormtroopers took the rhetoric to the next level being threatening on private property and blocking public streets at night.

"Let's make sure we show up wherever we have to show up. And if you see anybody from that Cabinet in a restaurant, in a department store, at a gasoline station, you get out and you create a crowd. And you push back on them. And you tell them they're not welcome anymore, anywhere. We've got to get the children connected to their parents,"

Attack their children to sway the parents. That's why the stormtroopers attacked the police and went in at night when kids were sleeping.

Wrong again, butt plug. Go try and find some friends and come and protest in OP. Just
Let us know when and where you will be. Does your Mommy know you’re up to no good? I bet she’d spank you and take your cell phone. Run along faggot.

Worthless assholes.
What do you call 10,000 ACLU lawyers at the bottom of the ocean?
A Good Start!

Trostky invented the term "racism" to create a new way to attack the West.

They admit they're communists.

We knew this was coming. It's exactly what the group was aiming for with the entire event.

The "riot gear" consisted mainly of a few helmets with the shields raised. Officers with actual riot gear were not deployed until one of the protesters attacked a group of officers. It wasn't much of an attack and the person wasn't apprehended, but nonetheless it was an attack.

Regardless, these 'peaceful' protests have a deserved reputation for turning violent in an instant. Would it not have been prudent to be prepared for such an event by having riot gear available? Especially since this group was marching through a residential area and already had confrontations with homeowners?

"authorized officers to withhold their badge numbers and other identifying information"

This may be their only legitimate complaint. I don't know if the identification requirement is city law or merely a department policy. If policy, I do not know if it was permissible to suspend it during the event.

In any case, people of this group crashed a city meeting and refused to identify themselves. One referred to herself as "Q". Seem a bit hypocritical?

"and targeted protest leaders with harassment and arrest"

The group was asked, and then warned, to get out of the street and move to the sidewalk multiple times. They did not, instead choosing to stay spread out to block the entire width of the road. Three of the arrests were for this exact infraction and there is no question they did so. That is not harassment.

Stacy Shaw, in particular, intentionally slowed down to block police and to be the first arrested. This was her goal and she achieved it. Just before Shaw was arrested, one protester even attempted to push her forward to get her to move along but she resisted the help. This is targeting and harassing the leaders? This is the same woman who claimed OPPD was jamming their cell phones, something they cannot do for legal and technical reasons. She has a history of lying even outside of being an attorney.

The response was neither. Until the group intentionally entered a residential neighborhood at night, the response consisted of two officers on bicycles wearing short pants. Only after ignoring repeated polite requests to stay on the sidewalk did more officers appear. None of the officers made any attempts to intimidate the protesters. The opposite was certainly not true. The 'peaceful protest' even continued after the arrests once the group were finally all on the sidewalk.

If anything, the police response was too polite and weak. Numerous protesters could have been arrested for trespassing and some for assaulting homeowners. The guy assaulting police who were arresting his wife could have been justifiably hit and injured. He wasn't.

The protesters' responses to the arrests? Those were excessive. Besides acting like whiny turds at the time they have done nothing but lie about the events. The press have done the same thing. Through outright falsehoods and omissions the press have attempted to portray the response to the protest as something it was not.

Ha, they think that is a military presence. They need to head back to the homeland of Prosperity to see Military actions. Notice they wear the shit, but never go there for a visit. Because Africa is a shithole. Pick a Country there that is better than life here, go and see how that shit works out for ya'.. True Dat

Is Kamala ( joe and the hoe ) ... Black, Asian or mix ? Weird Atleast we know that Lezzy warren is a Red Skin.

^^and yet their your new Pres & VP. Warren will be your new treasury Sec. Weird.

8/20/20, 12:32 AM Wall E. Weasel -
Thanks for the interspersed rebuttals. I saw even more departures from the truth in the ACLU letter, I'm sure you saw more too. But those are the bigger points.