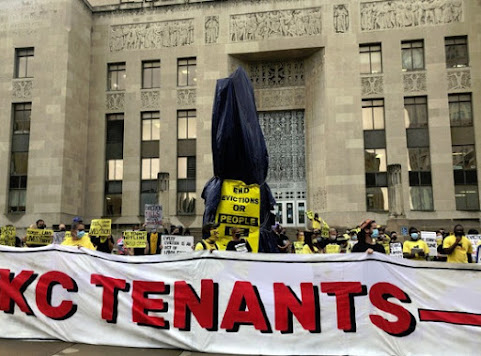 The threat of evictions looms not only in Kansas City but across the nation as restrictions have been lifted but the economic impact of coronavirus continues. Today, in a raucous protest, local activists ramped up their demonstrations with organized opposition targeting the Jackson County Courthouse.

Remember we talked about this demonstration earlier in the week and now it's news fact . . .

Context that's sympathetic to the plight of protesters:

Jackson County’s moratorium for evictions expired on May 31 and around 1,000 evictions have been heard by the courts since. Some hearings occur at the courthouse, putting people at risk to COVID-19.

“Many people after months of joblessness, under mountains of debt, Americans are still expected to pay their rent and mortgage,” one activist said.

Their declaration that started the torrent . . .

"Today our leaders shut down all four Jackson County, Missouri eviction dockets, in person AND on the phone. On an average week, anywhere between 150-200 cases are heard or tried on these dockets. Since June 1, the courts have heard/tried approx 1600+ eviction cases."

In front of the covered up statue of Prez Andrew Jackson . . . 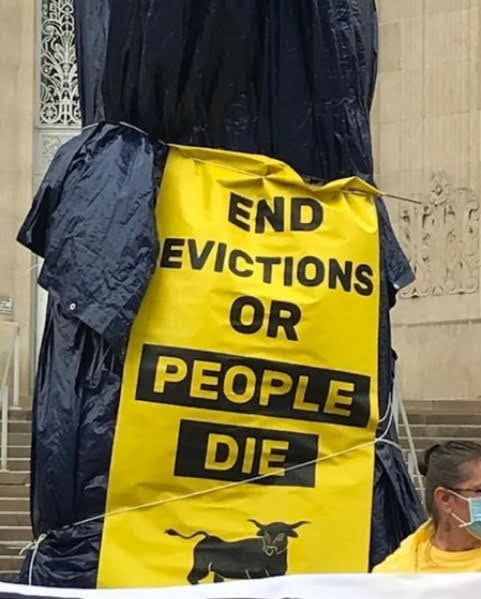 Perspective on the arrest drama . . .

"Two of our leaders, both Black women, were arrested and are being held. They haven't been allowed a phone call, and the jails are giving us the runaround, not allowing us to post bail. We will be outside the jail until our people are free."

"**UPDATE: 2 of our freedom fighters have been arrested and are being transferred to Jackson county corrections on 13th and locust!!! We are mobilizing to the jail now. Show up for support! Bring yourself, a friend, masks, phone chargers, water, snacks, an umbrella or two!**

Reasoning for the arrest: 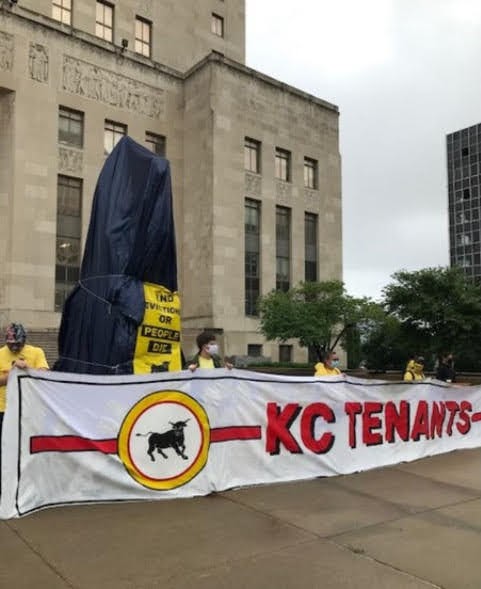 In a statement, a Jackson County District Court spokesperson said protesters chanted over the judge, plaintiffs and defendants, interfering with the rights of others, including tenants."Those persons who disrupted today’s court proceedings, although ultimately unsuccessful in their attempt to keep the hearings from occurring, actually interfered with the rights of the parties who were attempting to participate in those proceedings – including attorneys who were there representing the rights of the very tenants for whom those protesters were purportedly advocating," 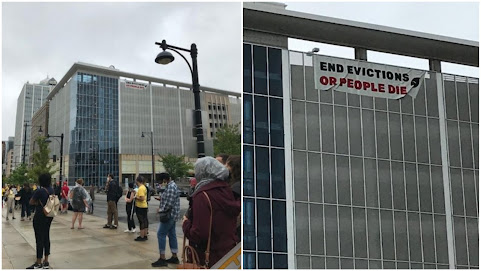 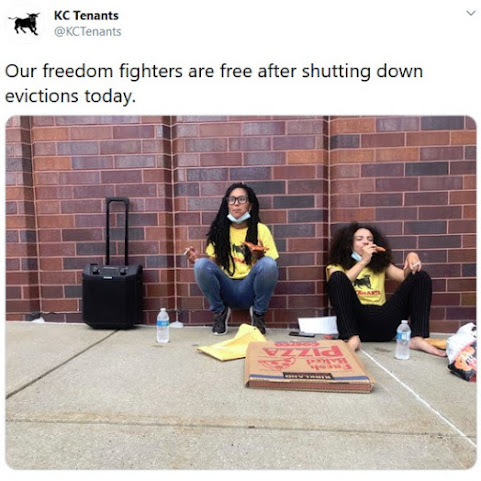 Everybody hate the rent.

But going back to the bad old days of housing projects would make crime even worse in KC.

Just think about how many people they caused to move closer to eviction today.

They can't be evicted if the landlords don't get a ruling. That was the whole point! Today KC Tenants won.

Run the niggers out of town, I say.

tip of the iceberg.

by mid-year 2021, things will be measurably worse.

Look at that TRASH sitting on the walk eating pizza like rats in a dumpster. What pillars of society.

5:18 all you did was stall the enviable and just wait till the landlords band together and drag your miserable asses in to court and sue you for what little you have as well as get restraining orders against you. Then you will no longer ba able to disrupt a court room. Pansy ass judge should have arrested all of you.

All they succeded in doing was convincing those that were still on the fence about leaving Kansas City to get out now
When the law doesnt matter, you have survival of the fittest

They look right at home there on the sidewalk, smoking and eating at the same time. Stay classy !

I want to see the names and address of all those protesting today.

Good for them! They are doing the right thing and we should all support their cause. The landlords are not on your side. We must support the people!

I am conservative but even I realize my landlord is a sh*t.

Time to bring back lynching!

Free Shit Army having pizza after another hard day of not looking for a job and demanding more free shit.

No money fo da rent but I gots monies fo pizza and cigs!

Ironically they can afford Pizza to be delivered. Weird

Meanwhile their hero Barry and Michelle are spending the summer in their new secluded $12 million dollar Martha's Vineyard mansion.

Poor people are the worst. If I ever get down to my last 1k I'd rather do myself in than stand in the rain at a free rent rally.

What people will die?

Never heard of someone being evicted and died.

Of does that mean do it KC Tenants way or people will die? If so isn't that a communicated threat of harm and violence?

That sure don't sound peaceful to me.

Another reason for the children to throw a fit.

What are these racists doing not praying to St. John Lewis??

If they stayed, they gotta pay.

Those two are oh so lovely with their backs against the wall devouring their free pizza.

You people know nothing. There is a housing shortage in the Kansas City area, not a glut. Houses are being snapped up (unless they are shitholes, and even those will sell for the right price). This isn't New York City. There is no rent control here. We can charge anything we'd like. I raised my rents nearly 100% and still had people fighting to rent from me. Guess what happens when you get evicted, freeloaders? Rents go up, tenant screenings get more strict, and you get less choice in Kansas City. Tip of the iceberg indeed. Sorry folks. I rent houses to put food on my table, so if tenants don't pay, I don't eat. And unlike freeloaders and illegal aliens, because I have worked hard all of my life, I don't qualify for any freeloading government money programs. So keep it up freeloaders. Don't pay rent. Your $800 rent will be $1600 by this time next year. This will ultimately be good for landlords.

Surely none of these patriots will be charged.
And if they are, they certainly should be pardoned.
This is Jackson County and KCMO where, as long as you're an "activist", you can behave anyway you want to, and even break laws if you don't like them.
Where's kneely Lucas with his bullhorn to stand up for these courageous folk?
Every single day is the opening of a new entertainment in downtown KCMO.
Come on down tyo see it.
And remember, if you get a parking ticket, it's free!

You've had your free rent assholes. The police will now resume kicking your asses.

I recently owned two rental properties but got rid of both of them. The renters I had made a mess of both units. The rent money was never on time and I could see the way this was going with the Kansas City Council. After 10 years of owning these properties I doubt if I made any money above my expenses.

George Soros is behind all this rent issue. In spite of being a multibillionaire in Monaco, he cares deeply for the KC renters and he is funding these protests. What a caring insightful man!

Q Ball and the director of the Jackson County Health Department should have to pay the landlords all of the rent they lost out of their own pockets since they are the ones that kept everything shut down.

Its tough but the law is clear. If he Govt keeps stopping evictions they must pony up the rent money. Otherwise it's a taking. There is nothing for it but for BLM frauds to fork over that millions and help people for real

George Soros is buying up all the rental units. Then he will offer them for free, I feel it in my bones. All the layed off DST Systems Inc staff can live free!

The solution to affordable housing is to NOT pay the landlords that actual invest and provide in housing. You know, make sure it's as expensive as possible for them to remain in business. Make sure to tear up the house and steal everything that's not bolted down. When you don't pay rent, make sure to use the court system as long as possible to prevent the landlord from finding another tenant. If after you do all of this, make sure to sue the landlord on some technicality and rack up all of the legal bills possible. Icing on the cake - publicize how aweful the landlord is after all of this and group them together to make them heartless racists. If you'd followed these steps then you've done your job. THIS IS THE SOLUTION TO AFFORDABLE HOUSING!

"Affordable" is a crap name for government subsidized housing. That way they don't have the stigma of being the government leaches that they are.

Anybody watch that TV series "Sliders"? Alternate reality every day. Many of the protesters are living and draining their parents pockets. So basically white privelage and black well doers(they actually worked hard for the life they have) is responsible for this. Cut your childs purse strings off and accept that you will never see your grandkids again. Oh, what a brave new world.

George Soros is peeing in bathroom in the middle of the night, and not always hitting the bowl correctly. I have no other ideas how this could happen .

Why can’t we give blacks reservations like Indians ? I know they can’t handle casinos but we could give them something else ... just a thought.

Where does the money come from for large banners, signage t-shirts and bullhorns? Hundreds of dollars spent when maybe a landlord could have been paid instead. I know times can be hard especially if you are an server or back room restaurant worker but paying rent is an obligation that means the landlord can pay the mortgage, make repairs, provide water or trash services. The landlord has expenses that dwarf your own and has a family too. If you get laid off go get another job until your first job comes back. Pay your way. Nothing in this world is free.

Byron, I'm proud of you. You seem to finally see the light. Great post on the responsibility of those renters.s

I guess that the Free Cheese Renters have never looked or lived in REAL Socialist based housing, like they demand. Maybe they should flee this terrible America. Terrible America where cops kill them more than they kill cops ( lol ) , they cant get work due to prejudice, they have babies because they are forced to mate, they are forced to buy illegal drugs, forced to commit violent crimes, forced to fraud others. I would flee if I wasn't able to make my own rational decisions in a Free Country and had to live in a POS they cause.

That pic of the "protester" eating pizza and not wearing shoes is gross. Who walks around Downtown without shoes? Get some flip flops at least.

George Soros will pay everyone's rent for the next 5 years. Just wait for his check, its in the mail