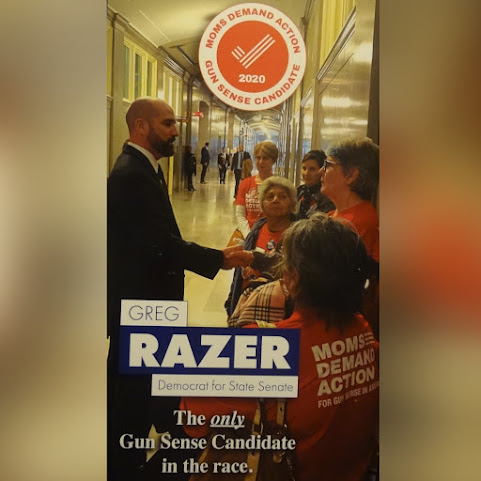 Missouri State Rep. Greg Razer is on the path to progressive victory in 2020.

For those who don't know Missouri Democratic Party insider . . . He has mostly been an advocate for LGBT rights . . .

"As one of only a handful of openly LGBT elected officials in Missouri, Greg knows firsthand the importance of passing the Missouri Non-Discrimination Act (MONA). The fact that someone in our state can still legally be fired from a job, kicked out of an apartment, or denied food at a restaurant simply because of who they love is unacceptable. We have made great progress on this issue in the House of Representatives. With your help, Greg looks forward to passing MONA in the State Senate."

It's worth noting that MONA has been stalled for more than 20 years.

Now, Rep. Razer has turned his attention toward guns and that's probably a smart move given his Democratic Party dominated KCMO district and the recent spike in homicides.

"Gun violence is an epidemic in our state and our nation. Whether it be gun violence on our streets, from a domestic abuser, or a random act of violence, we must find a way to come together and tackle this problem. Greg has stood firm in the House in support of reasonable, common sense gun legislation, and he will continue to do the same as our Senator." 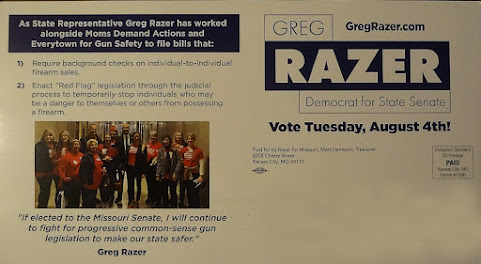 Whilst Rep. Razer will soon become State Senator Razer . . . There's no indication that his progressive policy goals will meet with success given the Missouri Democratic Party's super minority status . . . Meanwhile, more pressing local issues related to infrastructure and state services threaten to be neglected yet again.

Better title for you TKC.

Nah, he's totally going to solve local violence with legislation that never gets read and is booted from the docket without a look.

His voice and advocacy could help make the difference in stopping violence. It's up to everybody to speak up in the name of peace and to protect human life.

Gun control and LGBT issues.
Working hard to keep the Missouri Senate a veto-proof Republican super majority with Democrats not even players in serious legislation.
Another irrelevant personality cult in the making.
It's not government.
It's entertainment!

Sure, blame it on the guns, not the people who misuse them.

The guns aren't being "misused", it is their function to kill people.

That's why they're so popular.

^^^ shut up moron, you don’t belong here, you and your kind are sick in the head

^^That's not the way things work in this country CHUD. Now blow me while I shit.

^^I keep asking for your address and never respond.
I want to blow you while you shit.

Hope he is also anti drugs and focusing on a race responsible for the majority of the gun deaths. Hope he also knows the difference between illegal gun possession and legal, which is also the difference between the crime rate and no crime. I forgot, it's always old rich white NRA legal gun owners that are killing blacks on the street.. F' tards drink your kool aid with this loser.

Byron- the point of guns is to protect your family/self and take game, depending on the need. Illegal guns are a majority black mans death tool while legal guns are used under the protect and take game. Know the difference between blabbing and truth. You blab constantly. Have you never noticed all the people telling you how stupid your replies are ?

^^if you need more than one gun, you're an ammosexual. Maybe try to get laid once in a while. You wouldn't need to play with guns if you did. Loser.

^^ Did your right palm tell you that?

Different guns are made for different purposes. You cannot conceal carry an AR-15 and you cannot make steel plates ring very will with a pocket gun. The bed stand gun is different again. It goes on.

10:21 , your knowledge of Guns is outstanding. One gun does not cover all tasks , purposes and use. Like a smart car and a bus are not the same. And 1st grade should have taught you basic reasoning. Think before you type next time.