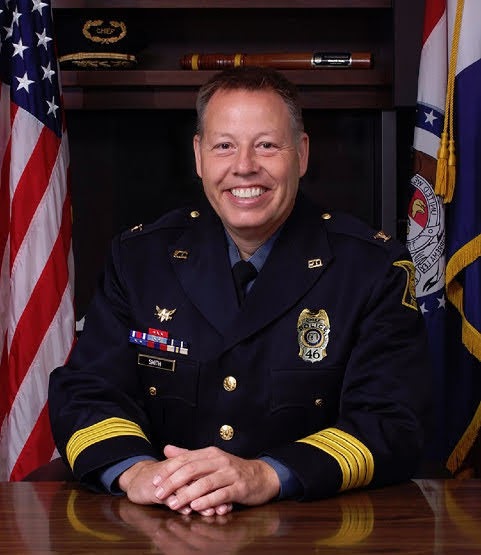 The Kansas City top cop holds a slight edge in the online debate over his dismissal.

Of course these petitions are non-binding and not even restricted to KCMO voters.

HOWEVER . . . The fairly close numbers indicate that there's no consensus either way and the move to oust Chief Smith has yet to garner critical mass despite a bevy of well-attended local protests.

The conversation is just getting started. For better or worse, every police shooting could lead to more demands for his dismissal. That's just a fact of life for this chief and every other in the United States.

Can he stay if he promises not to wear his headdress?


You had a police chief kneel in the streets like the coward he is, while looters and rioters broke into stores and destroyed property and you people want to keep him? You people deserve all the crime you are getting and more. Don't let me hear you cry when your children are killed I'm sick of it and you support it.
Because you don't want to do anything about this dirty cop you people KILLED YOUR OWN KIDS! Spinless cowards. Now go light a candle for your dead kid.


Look how stupid he looks sitting there grinning like a opossum. Now he's a real PIG.

Where is the Mayor Lucas resign petition

What Black people wont waste their time on. You know, with all the urban core violence - largely black against black... I don’t understand why they feel they must always see Black people in positions of authority. So what, this current Chief isn’t Black. What’s his other crimes? What did the Black Chief/Sherriff do other than be Black? Uppity Black, at that.

Where is the Mayor Lucas resign petition

Keep the Chief, dump the mayor.

Beside the pension, why would he want this job?

Keep the chief and get rid of the murderous negroes.... and make Petersucker go with them

How dare this police chief not be black!!

I just sold my house! I am getting out of this shot hole and heading to Oak Grove...I am not going to let my family grow up here and be picked off one by one. SCREW KC!

So a total of around 14,000 signatures on "petitions"?
In a city with a population of around half a million?
Neither significant nor "democratic".
The chief's not going any where, nor should he.
The BLM gang, if they could stop fighting among themselves over who is the biggest of all, need to round up their clueless suburban "allies" and march through east side streets DEMANDING an end to the endless black-on-black homicides.
That would be a real contribution to their greater community.

^^ It's a much more pleasant affair violently protesting among the beautiful ambience of the Plaza than it is among the wretched, dangerous and nauseating squalor east of Troost.

He's done nothing about the Amish buggy drive bus, either.

To be fair, you would have to remove all the people not KC residents. I would suspect the keep the Chief group would drop to less than the get rid of him group. I'm just saying...