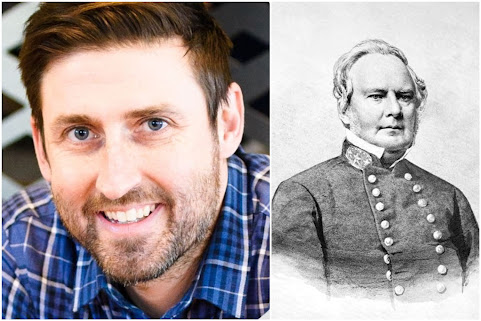 However, in his spare time he has been an "ally" for the local Black Lives Matter movement and delivered some fiery speeches to crowds of minorities doing their very best to abstain from giggling.

Now, in order to protect a local middle-class enclave from any mention of history . . .

Major-General Sterling Price (September 14, 1809 – September 29, 1867) was a senior officer of the Confederate States Army who fought in both the Western and Trans-Mississippi theaters of the American Civil War. He rose to prominence during the Mexican–American War and served as governor of Missouri from 1853 to 1857. He is remembered today for his service in Arkansas (1862–65), and his defeat at the battle of Westport on October 23, 1864. 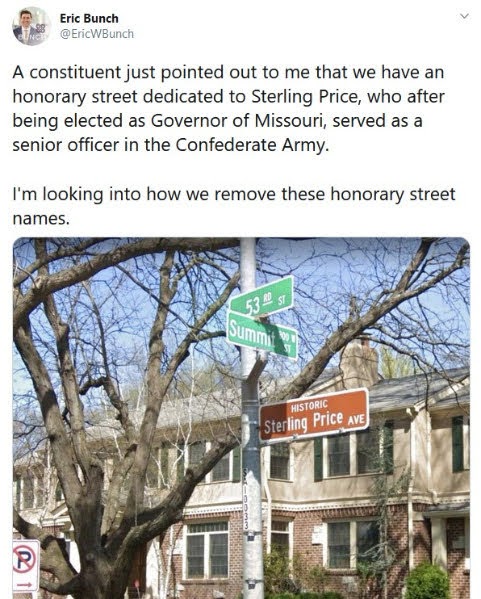 Whilst Council Dude Bunch is still fighting the Civil War, we haven't heard a peep from him about rising crime. The 4th district has suffered a spate of robberies, shootings and more important problems that continue whilst the junior council dude contemplates history and street signs.

I support Bunch. For mayor of Leawood.

Rumor has it he rides his bike without a seat, and it makes him very happy. Could this be true?

Renaming streets from the past is easier than fighting today's Homicide rates.
Go figure, and we actually pay for this crap.


You radical liberals are hysterical. You are the ones who supported the confederates during the civil war and still do. Really unhinged people living in the past that you can't erase. So funny.

I will not wish harm to anyone but I would not be sad if Mr. Bunch was somehow made a part of the pavement. He is a pox on the city and he should be removed.

Could you even tell me 5 things the Democratic Party has done to improve you're day to day prosperity as a hard working American citizen? Probably not..

Remember the democrats voted 100% against the abolition of slavery? Who spends millions to rehabilitate criminals and they do almost nothing for the victims; in public schools you can teach that homosexuality is OK, but you better not use the word God in the process; you can kill an unborn child, but it is wrong to execute a mass murderer

Bunch's campaign against honorary street names is right up there with Trump's defending Confederate monuments and Army base names.

Both are demagogic stupidity.

If we take this cancelling of our past to its logical conclusion, you have to cancel the slave and his descendants as well. I can't imagine that's the end goal but you otherwise need to rewrite history.

And to think I voted for this jerk, but just like all elections in KCMO, it usually boils down to the lesser of two evils, nobody with integrity would run for election in this town! Conflicts of interest seem to be the norm! Wake up KC, you get who you vote for!

He needs to focus on the street conditions not the name.

Council Woman Bunch has his panties in a bunch.

Do the total renaming of all streets - all at the same time - so every month we don't have another street that is offending someone like Mrs. Bunch.

Hopefully, no one in the future will be offended and this would solve at least one social justice crisis.

Dry up ya' half-a-sissy.
Go bake some cookies with sprinkles with your fag hag Shields.

One has to ask - how does one decide General Price to be the subject of discussion?

My guess is Bunch was watching True Grit one night and chose wiki pages to find out who or what a Price was. Surely couldn't be just the cat.

Bunch should move to California.

You're proposing a false choice.

He could try to do both.

But, really, what can be done about gun owners?

None of these efforts are about "erasing" history, that's bullshit.

Confederate Generals were NOT heroes, they were traitors.

Why the hell are so many things named after traitors??

After Bunch is through with Sterling Price, he should turn his attention to streets named after SBA grifters: starting with Emanuel Cleaver II Boulevard.

Like MLK park? Byron, you’re a retard. Stop being wrong all the time. What is you IQ, like 30?

Thank God, Eric Bunch is saving us from the scourge of having to remember generals who died over 150 years ago. So, how about those pot holes, trash pick up, property crime, black homicide rate, etc?

Because Confederate generals weren't traitors, but Americans who thought they could live free and have slaves. On the flip side, most Democrats today are traitors who think that socialism which is slavery is compatible with being an American.

The last Eric Bunch virtual town hall (aka 4th district) was well attended with over 100 constituents. The same events for the other districts are 25 or so. Unfortunately Kathryn Shields wont participate beyond a 2-3 minutes hello in the middle of the call. Encourage Eric to have more town halls and to include the members of the police commission on the town hall. Rick Smith the police chief will only participate in the town halls for the districts north of the river...

Bunch just isn't that smart. Well intended and he believes what he says, but he is a lightweight. Ok, so we know he hates cars, helped screw up Armour and wants to fund the $450 million bike plan....but that's it folks. Just repeats the news from City Hall with no idea of how to address the big issues. The millinials wanted him, but he has done nothing for the 4th District or the city.

His "virtual" town hall meeting was well attended.
Hahahaha!!
None of those kids would come if the meeting actually took place.
And someone as stupid, self-serving, and arrogant as Bunch is is not "harmless".
Certainly not in his position as one of 13 people in the entire city of KCMO who has access to a $1.4 billion budget and participates in making public policy for over half a million people.
But a former comment is right on the money.
The folks who run for and get elected to public office in KCMO are truly some of the most incompetent and self-dealing folks you could possibly find.
Amazing in a town of almost 500K residents these same kinds of clowns show up over and over again.

Bet Eric would not have a problem painting the street Rainbow pride colors, imposing a subgroup's culture and belief system on all others. Weird

I acknowledge that I cannot find anyone anywhere near where I reside who will listen, or allow me to post what I have to say, but that should not make any difference in my continuing efforts to inform and instruct the mostly racist residents of the Kansas City area who post on this blog.

Actually, I enjoy your often insulting responses because it lets me know
you are reading and considering my enlightened input.

I’m guessing he wants the street renamed to tinkerbell lane

While a lot of us disagree with you, Byron, I (for one) enjoy reading your counter-point. I find myself wondering "why does he think that way?", but please continue to post your views. I suppose the ad hominim attacks will continue. But I've noticed that doesn't seem to bother you very much. I don't agree with most of your posts, but you have just as much right, as anyone, to post here.