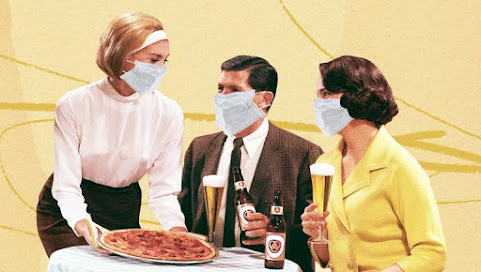 A quick slice of life and a slightly altered word from a local server that's gaining traction on social media right now . . . Checkit":

"Today, I served an 8 top of young women on a restaurant patio. They had a couple drinks before they ordered food.

"One lady was sitting at a different table and called me over to order because SHES SICK AND HAS A TELEMEDICINE APPOINTMENT. She had to have seen the horror in my eyes and was like, "Don''t worry I don't have virus symptoms." Then when she rejoined the group of 8 fucking people I overheard her say she has to go in for testing after lunch. (After her table left another table told me to be careful cleaning her stuff as she was coughing, sneezing, and blowing her nose in a linen napkin.)

"The absolute audacity to go out to a restaurant sick - virus or not - right now is beyond me.

"Help me understand, do people not think bartenders and servers can get the virus or do they just not think we count as people?

"I've been cussed out for asking people to wear a mask, I've been not tipped, I've gone down to working 2 days a week because I just can't bring myself to serve people who have zero respect for the health and safety of me and my family, and those in the community."
#######

notice that a lot of customers and servers are very tense right now. Not really a great experience going to restaurants nowadays, have stopped because it's just not fun.

In theory I agree with her.

But it was probably just allergies.

KC waitresses are the worst, not my fault for your crap life choices. You should have studied harder.

Agree with 8:26 totally. Going out just sucks. Some employees just enjoy being enforcers because this is the first time they ever had any power in their lives. Some servers hate customers and this pandemic gives them a reason to boss customers around. Why open at all if the experience sucks at a fractional capacity. How can it be profitable?

The sick woman was probably a Karen who knows everything and usually enjoys telling everyone else what to do and how to behave. The rules just do not apply to her.

8:29 What a POS. Who in the hell do you think you are being critical of hard working folks trying to make ends meet? I respect anyone who works hard to take care of themselves rather than depending on the government.

You must really think you're something! No respect from me asshole!


Not sure if this story is true. I'm thinking it's not.

could of been grass pollen - pretty bad until the rain.

I agree I don't believe this story, it smells like a dead fish. She can easily produce the ticket from that order. I want to see the ticket for 8. I want to know what restaurant in Kansas City let these ladies in with no mask. Sounds like somebody just want some attention poor baby

You are correct in believing that some don't consider you to be a person. In their mind, you are simply a thing that brings their food/drink to them. These are selfish, self-centered people who obsess over themselves.

Social media has fostered this attitude and only made it worse. Everyone can be a "celebrity" or act as if they're one. And if they're not a celebrity, then they're a victim who's owed reparations from society.

Did you see where "raised a poor black homeless child" but received an Ivy League education Mayor Lucas was flouting the facemask rules at Lake of the Ozarks the other day? After attempting to destroy most businesses (perhaps your restaurant) and increase unemployment with restrictive virus mandates in KCMO, the fool skips off to the lake to party with undisclosed friends. Dr. Archer, of the KCMO Health Dept., is so stupid that he practically confesses that his coronavirus mandates are politicized propaganda aimed at defeating President Trump in November.

So yes, very naive server, many people are not thinking about you and your welfare at all. Sick patrons at your establishment, Lucas, Archer, an old man with dementia listening to a record player in his basement who wants to be President. I feel your pain. Hang in there, stay strong, and this manufactured pandemic will likely magically dissipate after the November election.

^^so does your life.

This is about discouraging people to go out of their homes.

You won't recognize your mother when you get home 9:35. I shaved her back.

Sadly I do believe this story. I do see Karens behave this way. And while you do have to wear a mask entering the restaurant, you can take it off at your table.

With the attitude and mouth on this bitch waitress, it is no wonder she gets no tips.
Go work for Amazon, loser.

^^It's no wonder YOU'RE on here with that attitude. Everybody hates you and you have nothing better to do.

If everyone stays home, then the server doesn't have a job. It's lose-lose with this story.

The whiny bitch can get a job selling plasma or whoring herself on Prospect.

Hey dickhead @11:08 she would probably make more money at Amazon and not have to deal with losers like you.

Young people think they're invincible. Human nature. The problem is many of them don't think much about or care if they're infecting others. That's the reason for the uptick in cases around the country.

Must Read? Don't go to a public place when you are sick?

This is just a made up story.

Oh please. Did you forget which website you're reading it on or something? This is Kansas City's Best Fake News right here.

There are still people that go out sick.And to work and school. Stay home .And in many cases its the Employer's falt. Pay employees that are sick .So they won't infect your work force.

It's the year of the crazies and psycho's.

^^Amazing! With that insight it's too bad you never became a teacher or politician. Oh, I know, it's because you write like a retard.

How old are you, eight? Can you come up with an insult that doesn’t disparage innocent people? What a loser you are.