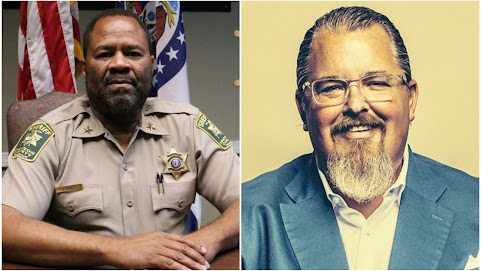 Now it's time for some good old fashioned inside political baseball given that MSM & social media are nothing more than an echo chamber of talking points.

To wit and with many thanks to KICK-ASS TKC TIPSTERS . . .

Brief aside . . . Now that Jeff Roe does most of his business from Texas, we just learned that he downsized his office.

But first . . . Check the Sheriff's campaign reports and his recent EPIC payouts . . .

The money quote belongs to a longtime KICK-ASS TKC TIPSTER:

And here's a look at Axiom's digs confirmed at the very same address . . . 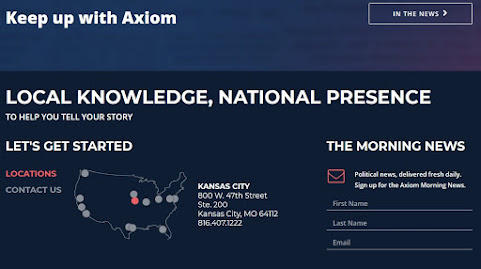 For the noobs, who don't know Jeff Roe . . . Here's the best article that has been written about him so far . . . Back when he ALMOST beat Prez Trump. 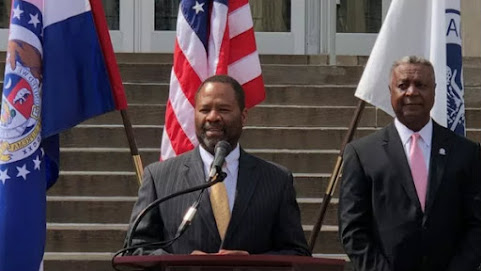 This campaign tidbit might be hard for Sheriff Forté to explain given that he has aligned himself with the Black Lives Matter movement and seemingly wants to focus his efforts on reform not politics as usual.

As for Mr. Roe, the Sheriff Forté campaign is one of HUNDREDS that he manages at any given time and his firm has actually picked up a great deal of East side & traditionally Democratic Party KC biz now that Steve Glorioso & Pat Gray are pushing up daises. 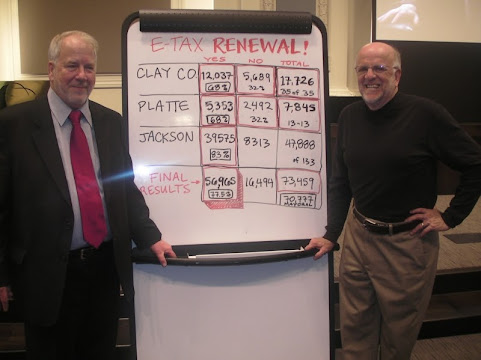 Even in Democratic Party dominated Jackson County, of course the Sheriff wants the help of the very best firm working in Kansas City in much the same way that Republicans at Axiom are more than happy to trade their services for cold hard cash regardless of ideology.

Fact is . . . The political alliance is noteworthy but not shocking given that partisan disputes only exist in the minds of the plebs, clueless protesters on the street or angry consumers mistakenly thinking that cable news is real. Per ushe: Left vs. right merely represent two sides of the same coin in this rigged game.

here's what you're missing Tk. Republicans aren't going to hold this one against Roe. But Forte will be hurt by it when all of those white liberal realize that he doesn't have a lot of political scruples.

Anybody voting in this one will have to hold their nose.

I'll vote for whoever will reduce the amount of overtime paid to the Sheriff's office. Pronto!

Left v Right. Two sides of the same coin. TK spells it out.

Most rank and file union members are Republicans now because the Democrats abandoned them by moving so far left. Liberals look down at blue collar workers.

The Real Truth Is said...

Anybody but the bigot Forte.

say no to roe

A race between a failed KCPD chief and someone who blatantly misused taxpayer funds? Is this the best Jackson County can do? Anyone who donates to either of these two turds should be ashamed.

The bigger picture is that Forte’ had no choice but to hire one of the most cut throat campaign managers in the country because the stars have aligned against him, and he knows he’s going to lose this election if he doesn’t take drastic measures. The Democratic leadership in JACO hate Frank White who appointed Forte’. They can’t stand the fact that both of these men keep playing the race card, even against other Democrats. In other words, the JACO Democratic leadership has seen the two of them for the racists they truly are. Some of the heaviest hitters in JACO Democratic circles have encouraged Mike Sharp to run against Forte’, and they’re backing him as a candidate. Forte is likely to lose this election due to a lack of support within the Democratic Party. That’s why he has employed a cut throat Republican campaign manager to better his chances of retaining the office Frank White appointed him to after Sharp stepped aside two years ago.

Some elected officials must have seen Forte's county issued credit card statement & decided to back Sharp. Wonder why the Star won't report on this topic? Forte like another Republican we all know may need another term to avoid jail.

Forte$drinks alcohol while in uniform. Need to see his credit card. He is a bonanfide scammer. Using the Sheriff’s office to get himself through law school. His time in elected office is over.

Replace Jackson Statue with one of Glorioso?

Or Steve Glorioso Fountain on The Plaza?


Didn't you idiots get enough of Forte the first time? You never learn you just go back to your own vomit.

Or Republicans and Democrats are two wings of the same bird of prey.

So Jackson County Democrats had enough of Frank White and Forte? But they couldn't find anyone except a disgraced former sheriff to run?

The real story not being told is why did the head of the MO Democrat Party in her role of Jackson County Prosecutor not bring charges against Sharp for the misuse of our tax dollars.

Has at least the money for the trips, extra pay for employee he was having a sexual relationship with, and the 2 individuals on the payroll been repaid.

Should Democrats be voting in November for a Republican Prosecutor as the holder of the office has much more than looking the other way for Sharp to worry about.

Who are the legislators that Sharp keeps talking about on the news that wanted him to run again after knowing the abuse of tax dollars. What is the hidden agenda of these say legislators.

So much more and such a black eye for the Democrat Party.

However there is at least one Republican on the county legislators who runs as a Democrat, but looks out for himself like a Republican.

Per ushe: Left vs. right merely represent two sides of the same coin in this rigged game.

It is funny that Forte (Team Frank White/BLM) is relying upon Jeff Roe for help.

It's OK. Whatever it takes to get the job done, win the race, etc. Left v. right. Unions v. Corporations. We should really look at who is most competent. Forte has been around a long time.

So explain to me how JACO taxpayers are paying Forté the highest salary of any JACO Sheriff, EVER, but also providing him with cash advances from a county credit card. We are expected to believe that these advances were used for what, feeding the poor hopeless and hungry, or something much more nefarious? I would posit that these advances were taken from the county card to hide some less than favorable action from outside eyes.

Easy he was already in law school prior to sharps unexpected exit.

Who is the legislator that's a Republican running as a democratic??

Frank White is having a stare-down with the Andrew Jackson statue.

White was overheard muttering "I will get you Old Hickory if it is my only accomplishment as Jackson County Executive ! "

Listen to the Deputies who unanimously supported Sharp after two voting turns to allow Forte to step up. He did not. Forte is a self- serving racist. They say he rarely comes to work. Most of us can't get away with that. Support the leader the Deputies support and that's Mike Sharp.

Ha! Herman Cain got the Rona at Trump's Tulsa rally and it killed him! Not before he made some unfortunate tweets about not wearing masks. God, Republicans are so fucking dumb! Bye bye Boomer! He's sucking cock in hell today for sure!

12:45
Herman Cain was a great American and patriot.
A self-made man who made it even with the obvious disadvantage.
You, however, are total scum and have already reached as high as you will ever reach.
Depressed, dirtbag?

^^and yet he DID attend the COVID Rally indoors with Trump, and DID tweet about people being fed up wearing masks. Stupid fucking Boomer. Why are Republicans so fucking dumb? He'd be alive if he wasn't a dick-licking, closed-minded sycophant.

The surprising nugget is that it seems that Jeff Roe is somehow controlling the union endorsements these days? $34k doesn't seem like a bad price for that endorsement.

2:20. But the rally was not the only event he attended in that time frame. According to his staff he had been on a tour of multiple cities so there is no way of knowing where or how he contracted the disease. It could have been in Tulsa. It could have been somewhere else.

No matter where he caught it, an expression of anything other than sympathy reflects more on you than it does on anyone else.

^^well the fact that he refused to wear a mask almost certainly killed him. he was too stupid to live. Darwinisim at it's best.

^^^No, dumbfuck, masks don't protect the wearer from getting covid, they only give other people some protection against becoming infected by your breathing, coughing and sneezing. And you don't know squat about Darwin"ism" either. Give it a rest, go watch some cartoons on TV, those you might understand.

And yet there are no controlled scientific studies that show that wearing a mask (short of an NBC mask) protects you from contracting a virus.

^^and yet Cain is STILL dead because he was a dumb Trumpkin. LOL!


My pet turtle died and no one gives a shit. He was my best friend and now he is gone.

Hey Grip...you’re on here all day. Every day. I’d say your description absolutely applies to you too. Don’t worry though, you’re going to get the Rona too and then you can die like your hero did. LOL! Boomer...so dumb. Especially the black ones!

Mike Sharp is the oly choice.

Herman Cain employed thousands, paid an enormous amount of taxes, and was a true American inspiration to people of all races...Unlike that race-baiting John Lewis.

I love your blind ass,Byron

4:37 Grip is very correct in what will happen to you. Your replies to people here are always self descriptions of yourself. Nobody is here more than you posting total junk all day long. You're what they call a psychotic troll.

^^^and yet I’m alive and Herman Cain is dead and Grip is a porch monkey whose black life never mattered. Weird.

Thanks for this inside comment. I never understood how Sharpe could come back, but it sounds like he has rank and file respect which is something you earn.

Herman Cain was a stupid boon, and like all stupid booms they die stupidly. Let that be a lesson to you boons.

@325. Association is not cause and effect. It's a basic logic thing that prevents reasoning errors that you clearly demonstrate.

Yeah, your the troll king of Tony's. Always picking up other people's shit and throwing it back at them. Others maybe right or wrong but they have their convictions.

What do you have? Tell us please.

Still throwing shit. A baboon is an animal. It doesn't understand human language. Look it up.

Herman Cain was a national presence. How about you? What have you done? We want to know.

^^^Herman Cain was a moron who went to a super spreader event in Tulsa and would not wear a mask. He also tweeted about not wearing masks and how this was all a hoax. He absolutely got what was coming to him. Karma’s a bitch and he’s a prime candidate for the Darwin Award this year. Silly stupid Boomer.

Damn,I got called a porch monkey

I bet you get hard watching Rachel Maddow

Liberals look down at blue collar workers while Republicans look out for the rich. The reality is neither party cares about union members or the American worker in general.