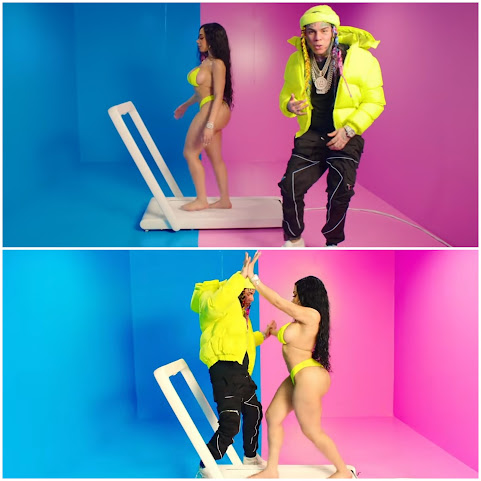 Recently, Tekashi 6ix9ine released one of the most wonderuflly sleazy songs on the pop charts and it's not only a new fave but also the inspiration for this morning peek at pop culture, community news and info from across the nation and around the world . . .

Residents in a south Kansas City neighborhood are fed up with large parties on weekends at a house in the 7300 block of Manchester Avenue.

The Shawnee Mission School District announced Monday that it has decided to cancel in-person graduation ceremonies on July 14, 15, and 16 because of the latest COVID-19 data."As administrators in Shawnee Mission, this was a very difficult decision, but with all the information and guidance about large in-person gatherings and

KANSAS CITY, Mo. - The Raytown branch of the Mid-Continent Public Library will be closed until further notice after a staff member tested positive for COVID-19. The library system said in a statement Monday that the staff member last worked at the branch, located at 6131 Raytown Road, on June 30.

Controversial Brooklyn rapper 6ix9ine has just dropped a new single following the release of his Nicki Minaj collaboration "Trollz." "YAYA" sees the rapper singing and rapping in Spanish, marking a distinct shift from his hard-edged English-language material. Watch the video above.


Trump could sink the House GOP in suburbia

President Donald Trump's continuing erosion among well-educated voters looms as perhaps the most imposing headwind to Republican hopes of recapturing the House of Representatives in November -- or even avoiding further losses in the chamber.

COVID Cash For Everybody

WASHINGTON - The federal government backed loans totaling as much as $150 million for Planned Parenthood affiliates in recent weeks, according to federal Paycheck Protection Program data released Monday by the Small Business Administration. The loans infuriated anti-abortion-rights conservatives, who cheered last year when President Donald Trump moved successfully to block the organization from getting access to the federal government's main family planning fund.


Pompeo warns of potential restriction of Chinese TikTok app; US users may be ceding info to 'Chinese Communists'

Secretary of State Mike Pompeo responded to former Obama administration National Security Adviser Susan Rice, after the potential 2020 Democratic vice-presidential candidate slammed him for appearing to be one of what she called "sycophants and weaklings" who purportedly refuses to properly advise President Trump.

India has now surpassed Russia to become the third country worst-affected by the coronavirus, in terms of total infections. Only the United States and Brazil have more. On Tuesday, India's death toll from COVID-19 crossed 20,000, and its total caseload now exceeds 700,000. Both tallies are now rising at their fastest pace since the pandemic began.

A six-year-old in Philadelphia, a seven-year-old in Chicago, an eight-year-old in Atlanta, a 15-year-old in New York, all shot. Community cries of "enough is enough". Neighborhoods in some of the largest US cities erupted in gun violence over the Fourth of July weekend, killing an estimated 160 people and leaving more than 500 wounded from Friday night to Sunday.


Once fighting for her life, local nurse takes strides in COVID-19 recovery

KANSAS CITY, Mo. - A Kansas City nurse is making remarkable strides in healing from COVID-19. FOX4 first introduced you to Ashley Arrowood through her loved ones last month. Now, she's able to sit up and speak. "Waking up from this has been really humbling," Arrowood said.

On Monday, Patrick Mahomes signed a 10-year contract extension that will make him the starting quarterback of the Kansas City Chiefs until at least 2031. Celebrate Mahomes' new deal with this new...


"Ring of Fire" weather pattern sets up for this week

asses & declining assets. Pretty much sums up the modern world.

90%+ of the homicide victims this weekend were black and at least that percentage of the perpetrators were too.
Six little kids were murdered, including one locally in KCMO.
"Gun violence" may be a catchy slogan.
But it's NOT the problem.
Identify the problem and deal with it.

First step in the Trump Administration's plan to assert Government Control over the Internet?


Quite the role model there. Probably should ask what the hell did your parents do to fuck you up so badly?

Yes, he has had problems with police but if you want to make an omelet, you know the rest.

1 where a high percentage of the population is white people living under white rule and in relative peace and prosperity,

2 where the diverse and vibrant live under DNC control funded by Soros, setting records for violent crime and murder.

What are you going to vote for?

"Trump could sink the House GOP in suburbia"

And Trump takes the GOP with him--down, down, down into the burning ring of fire.

Funded by Soros.....cuhlassic. Still going with the deep state, QAnon, bullshit I see.

If Biden wins; he is going to suck as President. Marxist Democrats will be rioting everywhere as the Democrats would control everything.

It would be total anarchy; similar to the movie Purge.

Biden will be a laughing stock puppet as he will be in the White House basement all day with his mask on shitting his diapers.

2024 may be a good year for Josh Hawley to run to fix the disaster if Biden wins.

^^^^NWOR. You may now return to Fox News for further talking points.

Yes, he's yet another characterless and completely interchangeable cash collector for his white owners, passing along rape and murder culture with DEM BEATS!


Patrick Mahomes is a disgrace to our city. He is the one who needs to go home..back to where he came from. He's a drunk that ruined the super bowl parade and his girlfriend is white trash. How can anyone support him after he praises BLM who has killed a little girl, a police officer and young kid in Seattle. Not to mention how they robbed and tore up our city with the riots. This guy is scum and that's not even a bad enough word. I curse the day his dirty filthy parents gave birth to him. Sleep well Mahomes you have BLOOD on your hands. Murderer!

Back to Matlock for you.

just another jew creation,he probably doesn't even know his parents

8:51 you could put your own name instead of Mahomes' and then apply the first two sentences of your reply to yourself.

It's obvious to me that you're the one not from here. If you're not able to leave k.c. for whichever reasons then stfu.

Looks like there is a regular Corona Cluster in Raytown what with the public library employee, and the mayor’s family and all.

836, thanks for movie idea. sounds like a great premise.

8:55, why do you pretend to be a black man when it's obvious you're a white nationalist?

Do you know who your father is?

Wait until there is a shooting at that party house. That will end it. We all know that clubs/ mass gatherings don't go too long with out someone going all insane gangsta. Hopefully no little 4 year olds will be there when some dope gangstas show their constant stupidity. Until then, troost, 18 th and Prospect areas will keep the body bags full.