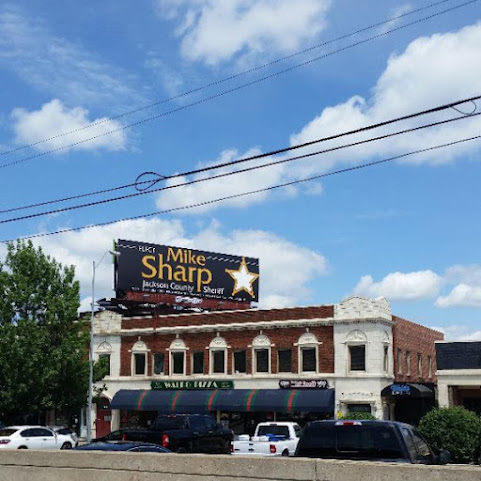 Local noobs and at least 7 out of 10 voters have already forgotten the "interesting" circumstances of former Sheriff Mike Sharp's departure from his old job that he's now working to get back.

The media was too scared to report the longstanding rumors until the gubmint finally sent over a case file to a few local newsies with tacit approval.

Accordingly, because this blog has only made 3 & 1/2 endorsements in our history, it's important to reiterate that: We don't have any favorites in the 2020 election cycle.

However, it's the mission of this cowtown Internets community to highlight local campaign tactics and strategy.

Former Sheriff Sharp is running a low-key but high spending campaign. His substantial war chest powers a ground game predicated on making contact with homeowners and residents in a very methodical and personable approach that has avoided significant mainstream mention. Translation: He's running a formidable "ground game" under the radar of most political consultants and pundits and mostly in the nicer KCMO neighborhoods and throughout Easter Jack. These are areas where the incumbent might not have a clear cut advantage.

Meanwhile, Sheriff Forté is focused on maintaining a constant social media presence and has impressively worked the mainstream media in order to challenge law enforcement colleagues and align himself with #BlackLivesMatter demands for police reform.

Reelection for Sheriff Forté is the safe bet . . . However, this Democratic Primary might be an interesting local preview of the electorate's enthusiasm for the "cultural revolution" that has erupted on local streets over the past month and ensuing demands to fundamentally transform American police infrastructure.

That waldo sign costs at least 2 grand a week. somebody wants sharp in there bad.

He probably got a covid discount. Billboards are cheaper than they used to be.


Anyone who votes for this pandering fool is down right stupid. His sex triangle and his going to the AME racist church to pander to black people. You fools in Kansas City will probably go back to your own vomit and vote for him.

7:55 Unlike your stupid ass who’d vote for the $500,000 ripoff artist, sure go ahead and vote for forte, he’s already up to his old tricks of disappearing for weeks on end especially now that he can ride his motorcycle whenever and where ever he wants too, funny thing is he does all this on company time. He’s been clever about keeping his mistress under wraps but she’s there alright.

Forte hasn't done anything but collect a paycheck so far, sure he stomps around every now and again crying about how everybody but him is a fuckup, he’s been in charge long enough so he can’t blame anybody but himself.

Vote him out and run him outta town at sundown.

His daddy got money!

Just a continuation of the same old tired version of local Jackson County and KCMO politics.
Same old faces and names.
Recycle over and over again.
And performance or even behavior never count.
Surely there must be SOME capable folks who live around here who could pull these jurisdictions and organizations out of the ruts they've been in for decades.
In this "choice", the voters lose either way.

Yeah, I don't know about the guy... that said, I don't like anything about "BLM alignment", on the other hand, does the Sheriff really matter?? Would probably vote for him just to show disapproval for the whole Marxist story of "systemic racism". Actually I think there is systemic racism right now and whites are the victims...vote accordingly

Don't like Mike Sharp or his personal foibles but Jackson County could really do with one fewer race hustlers in high office, especially in law enforcement. Anyone but Forte.

If Sharp gets in I'm going to get me one of those sheriff jobs where you don't have to show up for work.

Sharp has no ethics and should never hold public office again!!

Forte hasn't done anything, but attempted to make the JCSO a professional one.

What Forte should have done was clean the house when he took the job!! Being a nice guy. He left the snakes in the yard!!

Forte will be hit for his terrible negligence on juvenile cases while he was KCPD. Forte will be whipped bad in Eastern Jackson County. Can’t raise any money. Despite the $500,000 he absconded with when he retired from KCPD...he is broke.

How f'ed up are things in Jackson County when these two are our only candidates?

Regards to the 500.00 he left with..lol.. All the retiring chiefs left with large amounts based on their sick time..comp time.vacation time and saving plan.

His commanders are the ones he entrusted with the investigations.. If they didn't do their jobs and hid the truth from him..How is that his fault?Let's be honest about subjects..smh.. We have enough bs with this fake news crap..

Its time for a Republican Sheriff. Been 60 yrs and cant do any worse. Their wouldnt be any race baiting anyway. Who cares about Sharps sex life. More power to him. The pool to pick from my not be good to pick from so choose the one that is going to arrest criminals and bennifit the office their running for. Choose wisely