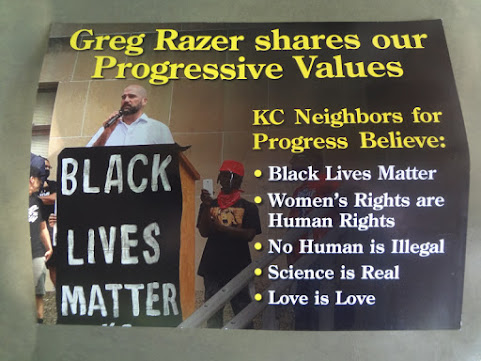 Denizens of the political discourse complaining about cliché is, actually, a cliché . . . NEVERTHELESS . . . We couldn't help but notice that the leading Kansas City, Missouri Democratic contender for State Senate isn't trying very hard to do any original thinking as he walks into office nearly unopposed by colleagues too afraid to point out that his accomplishments in office are little or nothing.

It seems his latest mailer basically cribbed a poplar yard sign placed by well-meaning and naive people who probably only watch Anderson Cooper for about 8 minutes in order to get their view of the world . . . Checkit: 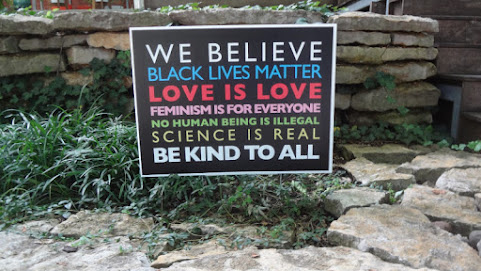 Still, Greg Razer grabs all the big endorsements in town and will soon serve as sort of a sequel to Jolie Justus . . . An other openly gay super minority politico who talked a great game and was beloved by The Kansas City Star BUT ACCOMPLISHED NOTHING FOR HER CONSTITUENTS AS A LEGISLATOR and didn't really help advance the cause of the super-minority party outside of her own special interest. 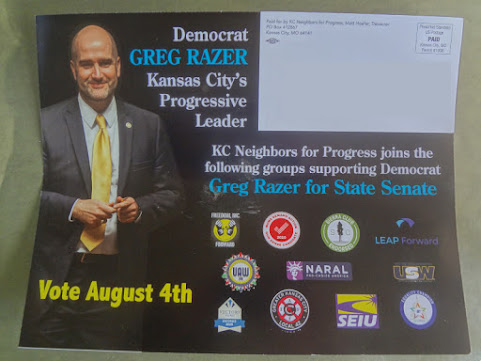 who the fuck is this guy?

He missed one. No list of trite platitudes is complete without "It is what it is."

We have too many homosexuals in political offices as it is. Why can’t they stick to interior decorating or something they’re capable of?

Judging by his messaging, Razer's brain appears to have been razed.

That clown has mayor written all over him if there's anything left of it by the time he runs.

...yet MAGATS put retard Trump on a pedestal. Racist, misogynistic, traitorous Trump. The guy who let Russia offer bounties to kill US service members and did nothing. The guy who let 140k+ Americans die while hiding in a bunker. He’s the guy who raised taxes and crushed farmers, middle and lower class citizens. LOCK HIM UP! LOCK HIM UP!

Greg Razer looks like a Mensa genius who could solve all world problems compared to Trump or any other MAGAT.

^^Damn right! MAGATS what fools they are.

Greg Razer is an illegal human being.


People need to learn where and what BLM is. BLM is a terrorist organization that is headed up by the terrorist herself Susan Rosenberg who received a 58 year prison sentence and it was commuted by Bill Clinton at 16 years. The BLM money goes through two foundations and into the pockets of the democratic party and the board members like the head board member Susan Rosenberg. NO MONEY goes to black people or racial issues to help black people. The most innocent black people out there have no clue who they are supporting. Foundations are criminal they only have to give something like 10% to the cause and the rest is pocket money. They are making millions off of black people and black people are falling for it.

^^And yet not one word you said is true. Weird.

We don’t need any more gay, homosexual politicians. We need normal people to run for office.

No human is illegal, but their actions are.

Another candidate, holding on to special interests to get elected...first the gay community, then add the transgender folks, the BLM folks, stupid democrats who would vote anything or anybody as long as it had democrat after the name and bikekc....that will almost get you to the election doorstep. Meanwhile the rest of us LET IT HAPPEM! Do NOT vote for these special interests folks. ANYBODY but RAZER!!!!!!!!!!!

^^^^ just can’t tolerate opposing points of view and likely can’t justify their own! Typical, “ shut up, go away” frightened much?

^^No, just can't tolerate Trumptards who ignore facts, have no use for truths, & can't contemplate opposing thoughts in their tiny, decaying brains. That's you fucktard. Go away.

Go away yourself you little pustule on a dogs scrotum!

Must be his boyfriend!

How many cliches can you fit on a poster?

Razer is the result of the enlightened woke in Brookside. Fuck - Brooksiders pat themselves on the back for voting for a gay, black, woman, etc. They say they are smart because they all live in the upper middle class of KCMO - but fuck...what a dumb group of people.

Remember - this is the guy that succeeded the drug addict, tax dodger Jeremy LaFaver.

SMH. Glad I moved away.