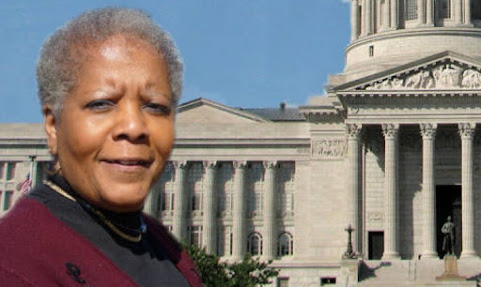 Like every politico, she has an equal number of fans and detractors. Here at TKC we need to focus on the facts.

Thanks to our blog community, we were directed to the case that's documented in great detail by the Missouri Ethics Commission.

Here's a link to the consent order detailing $4,207 worth of fines with an additional $16K at risk if there's probable cause for any similar campaign finances snafus.

Most of the ethics violations focus on sloppy bookkeeping and neglectful accounting of campaign funds. However, Ms. Mims is a powerful force in both Raytown and South Kansas City politics, the ethics crackdown deserves attention from local media which has so far neglected the story.

Tip of the iceberg. Most local electeds need more scrutiny of their finances. Just like president Trump will be forced to show us his tax records once and for all.

Trump's taxes are just as hard to understand as Biden.

Biden will not even release his public service records.


Email Parsons and tell him this women needs to be investigated for corruption. No one else in the metro area is doing their job and the next step is to go over their heads.
I won't stop until I see to it that Lucas and Chief Smith are investigated. I have to agree with the other comment these black communists are dangerous and have a vendetta against white people this needs to be stopped. Remember if you don't do anything about this you are just as guilty as they are, and NO you don't have to live in their city to report corruption and crime from these people.

^^^ you meant Lucas and forte didn’t you?

she's a nice lady surrounded by a lot of people who are just in it for themselves.

She’s a tool, and must be removed from office.

This vile, VILE creature won by five votes, which earned her her first and hopefully only term as an a!derman. She's never returned any of our calls or even pretended to care that she hasn't. We're considering filing a very justified ethics complaint against her and a couple other aldermen. Being an alderman in Raytown isn't going to get her cotillion ticket punched again in Jefferson City, as she may be so fervently wish. It's over, Bonnaye. OVER! Move aside. We deserve more qualified, intelligent, UNBIASED representation. I was initially so happy that she was elected in Raytown. She has been a PROFOUND disappointment however, in most constituent's opinions. So much so that it's been very distressing for us. We can't WAIT to vote her out.

And also, Mims is a FORMER Mayor Pro Tem, which really doesn't mean all that much in such a small town. The position was recently up for a vote. Mims
literally tried to force her way back in. She nominated HERSELF. She LOST. NEXXXXT!

This is a old Freedom Inc beef. She didn't do their bidding and they have an axe to grind. Not a huge Mims fan but Freedom Inc and their thuggery has run its course

Well, she's in tight with Ryan Myers who's running for State Senate, and the Mayor. I wonder how they're going to play this one.

Whoa! This is a shocker...not really because of politics but because I remember her name when I lived in her district. Always kind and always fighting against the majority to improve the area. I doubt that has changed but I guess it goes to show that it does not matter if you really did anything.. If you cannot prove it then it will catch up to you. The lesson here is to hold on to every receipt and proof of every dollar especially if involved in politics on any level... It might not be important to you but it might come in handy when least expected. Get a good accountant it you can afford it and turn paperwork in on time... Late filings can result in hefty fines more than actually doing anything. I knew Ms Mims when she was on the Hickman Mims school board before it went down the drain. It is now totally dominated by the biggest crooks in the Kansas City metro area... Freedom Inc. If any ethics commission looks into them and follows the money there will be no surprise the levels of corruption that get uncovered. These people have pretty much destroyed and sold out the Kansas City school district and the metro area.. and now they are doing the same with Hickman Mills and South Kansas City. They will not be able to hide behind the shield of Jean Peters-Baker and Cleaver forever. Galloway dropped the ball trading in doing what was right with keeping up the audit crackdowns and instead choosing to jump into the race for governor. Now this garbage will only get worse and what is going on downtown since former mayor Slick James will continue. The tactics and string pulling of crooked former councilman John Sharp behind the scenes will eventually come to light as well. His golden ticket was Darron McGee and he screwed himself more than once... Now it is his son Mark Sharp and he is screwing himself. This entire area needs a political shake up and revamping.

What happened Mims wouldn't do John Sharp and Freedom, Inc. bidding? I read her report and found the error myself. Ya want to destroy her because of what, she wouldn't fuc- any of you slime balls. first Sharp accused her of shooting up is house, next was she had someone else to shoot up his house. Rodney Bland filed the ethics bullshit. what about freedom not paying any of there violations, at lest she owned hers and is making payments. I don't know the woman and really I might just reach out to her because sounds like she is what kansas city needs, not afraid of the bullshit.

I saw where Raytown didn't take kindly to John's attics by putting the eithic stuff in the news. News flash scum bags, read the damn stuff she was investigated, case closed.

What's next John. Get a fuc-ing life.

Reading about Mims being a FORMER mayor pro tem, boy she got under yas skin didn't she?

She had a plan. In watching the meeting, she beat all of you suckers to the punch. In watching her she didn't want the seat again, I've seen her in action before, but she got the reaction that she wanted. She knows where her snakes are. Anybody knows how to reach her? I'll check facebook.

We're gonna walk back a comment that we made. The only vile people out there are the people that call others vile. It was made out of frustration, hopelessness. If ur elected to office, part of the responsibility is to return calls. Some of these aldermen do NOT. We needed HELP in our ward. A few of you NEED TO RETURN calls. It only takes a few minutes, and if you run for office, surely you understand that it's part of the response sibility. Signing off social media permanently because it's a trigger. No more keyboard commando. We intend to work for the good from now on, and then only in PERSON. Please return our calls. We will pledge to do better here. Signed, 10:22.