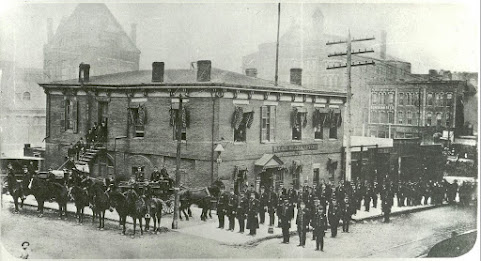 The photo above features the old KCMO police HQ from more than 100 years ago.

After the jump we document the continued impact of local court cases, police action and crime that has now reached an all-time high . . .

In the coming days, around 100 federal agents will arrive in Kansas City, Missouri, as part of Operation Legend, a program aimed at helping the Kansas City Police Department in fighting violent crime and solving homicides. Some anti-violence advocates are weary of the new program.

KANSAS CITY, Mo. - Kansas City, Missouri, police say it may take three to six months to receive test results from human remains found along the banks of Shoal Creek in the Northland. The remains were first discovered by a 10-year-old boy on Sunday.


Kansas City police could soon have KCI under its jurisdiction

KANSAS CITY, MO (KCTV) -- Kansas City police could soon have the Kansas City International Airport under its jurisdiction. The idea has been tossed around in City Hall for more than a decade. Now, some council members want the city manager develop a plan to make it happen.

KANSAS CITY, Mo. - The U.S. Marshals Service will deploy additional deputy marshals to assist with a new anti-violence initiative in Kansas City, Missouri, with an emphasis on arresting those on the city's most-wanted list. Mark James, U.S. Marshal of the Western District of Missouri, said Thursday that the U.S.

KANSAS CITY, MO (KCTV) -- James Young is wanted on a Missouri parole violation warrant for sex offender registration violation. He is also wanted on a Jackson County, Missouri, failure to appear in court warrant for burglary. His original sex offense occurred during 2009 in Independence and involved sexual misconduct with a 17-year-old girl.

The U.S. Supreme Court on Thursday agreed to hear an appeal by Kansas City payday loan tycoon Scott Tucker that challenges the Federal Trade Commission's authority to demand restitution, as the agency did in his case when it obtained a $1.3 billion order against him.

The Independence Police Department shared a video Thursday of a driver nearly running over an officer during a traffic stop in the parking lot of a QuikTrip.Police said the incident began when officers located a vehicle and occupants that matched the description of suspects wanted for stealing packages from front porches in Independence.Police said a pursuit of the vehicle occurred, but the officers discontinued for safety reasons and the suspects were not located.Police said the officer in the video was not injured.IPD is asking for anybody with information about the location of the vehicle to call 816-325-777 or email leads@indepmo.org.

When the blacks start going to jail you need to remember one thing, your black mayor asked for this to happen. This ain’t whiteys fault so suck it!


Yes crime has reached an all time high and we aren't putting up with it anymore. We screamed and the Gov listened. Quinton Lucas and the chief of police need to go to jail something isn't right about those riots and the release of the people who robbed stores. Can't tell anyone that they didn't know about it and the delivery of bricks! THEY KNEW!!!!!

You haven't broken the murder record, so crime isn't at an "all time high".

Your mayor, & police chief, do NOT need to go to jail.

But, by all means, please vent harmlessly on this blog.

@7:40 is partly right.
Lucas wanted the governor to call a special session of the legislature so that the mayor could try to once again deflect blame for the violence and murders in KCMO. That approach would be expensive for the taxpayers, completely miss the point, and accomplish nothing.
Parson played Lucas like a cheap fiddle and went to the feds. In fact he talked to Trump in person at the White House.
The boy mayor now is desperately trying to explain to the "leaders" in the black community how he could ever let this happen. The feds' arrival changes the narrative from social services and blaming others to where it belongs and might actually have a positive effect.
Lucas loses both ways.
It's a shame KCMO can't attract any adults to run for political office.