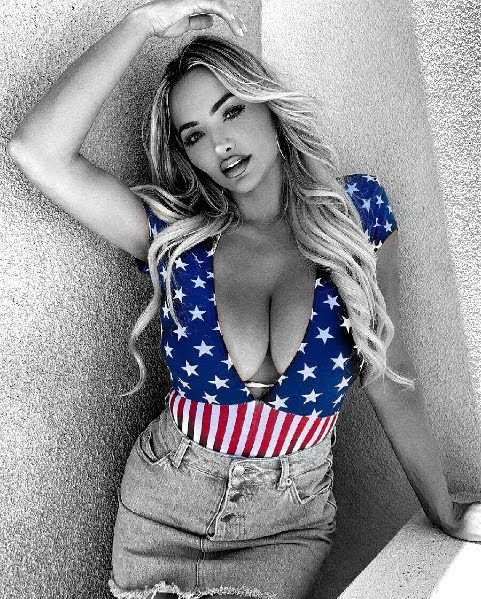 Hottie Lindsey has more than a handful of patriotism and right now she inspires this quick roundup of pop culture, community news and info from across the nation and around the world . . .

The past few months have been anything but ordinary for pawn and loan businesses because of COVID-19. Shops that expected to see people flooding the doors needing personal loans are seeing just the opposite.On any given day, Heartland Pawn in Overland Park could see just about anything come in the door.

KANSAS CITY, Mo. - A Kansas City, Missouri, man is doing his own research after coming across false information on social media. Steve Siegel told 41 Action News that "false information drives me nuts." Siegel is not a medical expert, but a researcher and engineer for the University of Missouri-Kansas City.

More than 140,000 companies in Missouri and Kansas received loans under the federal Paycheck Protection Loan program, ranging from restaurants and franchisees to car dealerships to nursing care facilities. While most businesses received $150,000 in loans or less to alleviate the coronavirus' economic fallout, about 2,300 companies got $1 million or more.

KANSAS CITY, Mo. - It feels like March was several years ago. It was mid-March when one of Kansas City's marquee annual events, the Big 12 Tournament, was set to tip-off. Staff at the Kansas City Sports Commission help to plan out the annual event, and were looking forward to another successful year.


Lindsey Pelas Flaunts Her Cleavage In A Sexy, Patriotic Look

Buxom bombshell Lindsey Pelas tantalized her 8.9 million followers with her latest post, a sizzling triple update in which she showed off her curvaceous figure in a patriotic top and denim miniskirt. In the pictures, Lindsey posed in front of a textured white wall that provided the perfect neutral backdrop for her snaps.

The Trump administration announced a new set of immigration guidelines Monday that would bar many foreign college students from coming to-or remaining in-the U.S. this fall if they attend a college that will move teaching online. U.S.


Sen. Tammy Duckworth, who lost her legs serving in Iraq, hits back after Tucker Carlson suggests she hates America

Democratic Sen. Tammy Duckworth, a US Army veteran who lost both of her legs while serving in Iraq, rebuked Tucker Carlson after the conservative Fox News host attacked her on Monday night and suggested that she hates America.

Brazilian President Jair Bolsonaro tested positive for the coronavirus Tuesday, shortly after the presidential palace said he had been displaying symptoms associated with the disease. The government confirmed to NBC News on Monday that Bolsonaro had been feeling unwell and was running a fever of 38 degrees Celsius (about 100.4 degrees Fahrenheit).

The Trump administration submitted a notice of withdrawal from the World Health Organization to the United Nations secretary-general, a senior administration official told Fox News on Tuesday, after President Trump for weeks had blasted the WHO's handling of the coronavirus pandemic and what he called its pro-China bias.

KANSAS CITY, Mo. - There have been fewer cars on the roads due to stay-at-home orders which were in place to prevent the spread of COVID-19, but the number of fatal car crashes has gone up.

Didn’t The Who just admit yesterday that they learned about the Chinese red death virus from the internet and not China?

Trump did the right thing by dumping the Who until they actually start doing what they’re supposed to do.

“Siegel is not a medical expert, but a researcher and engineer for the University of Missouri—Kansas City.”

There it is people, another expert from umkc school of stupidity, he claims after working out in the heat with a mask on that his blood levels dropped from 95 to 94 so there’s no reason to not wear a mask. I’m no rocket scientist but did he mean his oxygen levels?

And if you’re already fit it really shouldn’t be a big problem but for people with weaker lungs doing manual labor it sure could be. They make people do lung testing when required to wear a mask or respirator for work purposes so they don’t drop dead from wearing one.

Did any of the local Megachurches receive Covid-19 "Small Business Loans" the way the ones closely tied to Trump did?
Those "small businesses" reportedly took in hundreds of million$ of your tax dollars!

Does Sen. Duckworth believe that being a veteran or having prosthetic legs shields her from political criticism? She ought to be tougher than that considering what she has gone through. Get used to it sugar, if you are going to entertain attacks against the father of this country.


Good for Trump. Another smart move!

Whats a Duckworth? Not much in my opinion. She did say negative things so she opened the door to be criticize. But good ole CNN is flaunting that load of crap.

If any Pro ball player tests positive for HIV, are they going to Announce the players positive to that Pandemic ?

Both Duckworth and Carlson are nothing more than entertainers.
And not really very good ones at that.
But they can both make some noise and put on a show and these days that more than good enough to get hours and even days of media coverage over pretty much nothing.
Bread and circuses.
Now let's get more opinions about public policy, history, and sociology from those scholars in professional sports.

Tucker's great! One of the very few media folk who shine light on the crap our politicians expect us to swallow.

but mebbe not so much with the "hot chick pics" on TKC..

just kinda stick with Candice and her crowd of them big-tittied White wimmens..

10:18 Along with AIDS, another one of Dr. Faucistein's favorite diseases.

Duckworth loved her county so much, she sacrificed her legs in service.

Cadet Bonespurs couldn't be bothered to service anything other than his small dick during his personal Vietnam of fighting VD.

After allowing Russia to put bounties on American soldiers in Afghanistan, then inviting the Taliban to Camp David to discuss our surrender; Trump and the GOP prove they love the military. Just not ours. Fucking traitors. They can all STFU.

^^^^^Duckworth is a coward who will not go back on Tucker's show to defend her views. She is a political partisan hack who lies about Trump almost as much as you do.

While you are busy cataloging your lies why don't sit down and try to figure out while we still have troops in harm's way in Afghanistan, a whole generation after our initial invasion and occupation. Trump would like to get our troops home. You want to leave them there fighting until dooms day.