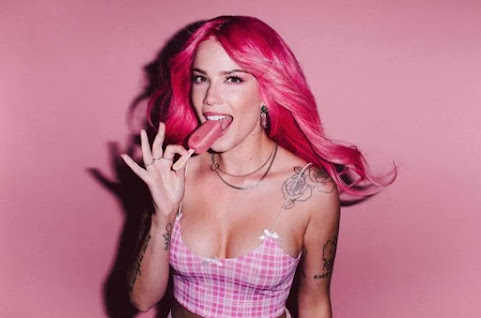 Right now hottie music diva Halsey inspires this morning peek at pop culture, community news and info from across the nation and around the world . . .


Threat Of Economic Collapse At The End Of The Month

KANSAS CITY, Mo. - In less than two weeks, the extra $600 per week in unemployment benefits will disappear. The loss of additional funds is a cause for panic for many people, like Angela Potter, of Kansas City. "Everything just literally kind of changed overnight," said Potter, who was furloughed from her job at a shipping company on May 1.


One killed, five injured after man drives into Wendy's in Sedalia; driver arrested

SEDALIA, Mo. - A woman has died and five others are injured after a man drove into a Wendy's into Sedalia on Monday night. The driver has been arrested on suspicion of driving while intoxicated, police say. Sedalia police said they were called just before 6 p.m.

Halsey switched up her look as she starred in ice cream brand Magnum's latest #TRUETOPLEASURE campaign. The singer, 25, ditched her dark pixie cut in favour of a curly pink wig as she posed with a matching lolly. In an accompanying interview, the Be Kind hitmaker discussed the importance of being 'fearlessly expressive' when it comes to embracing her 'uniqueness'.

The commutation of Roger Stone's sentence may have more profound legal implications, and the Redskins changing their name may have more cultural significance. But the escalating warfare between President Trump and Anthony Fauci may well have a more immediate impact on the pandemic that is increasingly devastating our country.

Many Ways COVID Can Kill


U.N. Report Says Pandemic Could Push Up To 132 Million People Into Hunger

The coronavirus pandemic could push up to 132 million people into hunger by the end of 2020, according to a new report from the United Nations. "As progress in fighting hunger stalls, the COVID-19 pandemic is intensifying the vulnerabilities and inadequacies of global food systems," UNICEF said in a statement.

The US supreme court has ruled that the first federal executions in 17 years can proceed, overturning an injunction blocking them in order to allow legal challenges to the government's lethal-injection protocol to continue. Judge Tanya Chutkan of the US district court in Washington had on Monday ordered the justice department to delay four executions scheduled for July and August.

Donald Trump has claimed a Joe Biden presidency would result in low ratings for media outlets covering the White House - an issue he suggested would cause the end of "our great USA" in a tweet.

It's a question a lot of us have right now: What can we do for entertainment and how can we do it safely? One former teacher has a new mobile website that can help answer that question."We wanted to show people, look at all of the great things that are here right in our back yard.

INDEPENDENCE, Mo. - A metro family is back together after their toddler managed to unlock the front door and leave in the middle of the night. Her parents and a child safety expert explain how you can avoid this happening at your home. Alicia Constant said the sound of 2-year-old daughter saying "Mommy" will never [...]

Hide Transcript Show Transcript WAYS HE IS GIVING BACK TO THE COMMUNITY TOO? THAT IS WONDERFUL. WE HAVE A GREAT LOOKING SUNRISE. A LOT OF RAIN SHOWERS HERE ARE TRYING TO HANG ON. WE MIGHT GET A FEW SPRINKLES. HOW ABOUT THAT SUNRISE? THAT IS OUR CITY VIEW CAMERA.

The extra $600 per week in unemployment benefits these people were getting for most was more than they made per week. If fireworks sales that I saw blown up was any indication that most were not using the extra 600 a week very wisely. But as always this younger tribe never thinks about tomorrow and what they get today in money they spend it all tomorrow and then whine they have nothing.

I had to work so I didn't get an extra 2400 a month to do stupid shit with. The essential people once again getting fucked while the non-essential get all the goodies.

^^^^^You don't listen to anybody so STFU

Bitter Truth, you ever just thought to yourself "Damn, I'm glad I've got a pretty secure gig and I can continue to pay my bills and not have to file for unemployment"? Or are you just the guy who's always like "Why do they get that? I don't get that, they shouldn't get that".

Nevermind, we know the answer.

Personally, I'm not going to judge someone else going through this situation losing a job. I have no idea what that's like and hope I don't have to deal with it.

8:07: +1000. How would 8:03 know who was spending money on fireworks? And then to extrapolate the fact that SOME people (who may well still be employed) bought fireworks into the conclusion that EVERONE who is getting supplements to their unemployment benefits is not managing their money wisely is so absurd as to indicate 8:03 is a Trump supporter.

Just when you thought he couldn't be more insane.


The economy is in collapse.
Bill Gates who was kicked out of India for using their kids as guinea pigs for his vaccines, causing them to have lifelong deformities and he isn't even a doctor.
Bill Gates and his big mouth admitting this virus would hit us two years ago.
Barack Obama for giving millions to China's bio lab to research this virus.
Accusing Trump of not shutting the economy down and then when he did accusing him of killing everyone and putting everyone out of work.
Democrats who make everyone wear masks but yet they go to parties and don't wear mask.
Let blacks riot but then bring the virus on hot and heavy after the riots to shut everything down again.
Lies about the virus being as deadly as it is.
WHO that lied to the president and public about the virus that has been around way longer than they say.
Dr Fauci who is a devout communist and has a track record of the most diseases.
Democrats are to blame for this entire thing because they are too stupid to see what is going on and don't even know who is on their side.
don't forget to get your vaccine when it comes out brought to you by Bill Gates who isn't even a doctor. Money talks doesn't it, you dirty democrats?

@8:51 what drugs do you take before you come up with this shit?
Either you're a deliberate Liar or a paid Russian Bot!
You'd better not believe any of this horseshit, because if you did you'll have no choice except to off yourself when Biden kicks Trump's flabby ass this November!

What's next in the Amazing World Of Trump?
"Reality is all a Hoax designed to make Trump look bad?"

HA HA! The Bitter Truth & 8:51AM got their crazy-asses knocked the fuck out!

and you love to comment on your own comments...weird and Lame

Does @8:51 get his material from CHUCK WOOLERY's Podcast?

TOP PHOTO -- THE TIP OF THINGS TO COME

With pink hair and covered in tattoos, when Ashley lost her job due to the coronavirus and sought a sugar-daddy for support, she was Bad At Love too!!!

Lot of truth to what the bitter truth says. A secure gig you say 8:07? What the hell is a secure gig?

For example a school bus driver as my wife's friend is in Olathe gets $330 unemployment for her part time job add the 600 to that and she is getting $930 dollars a week. Now mind you this is an extremely lazy woman why she only drives a school bus. So that breaks down to her getting the same as $23.25 per hour based on a 40 hour work week. But she has never worked a 40 hour week in her life.

Next we have Joe Hardworking with his essential job at say Billy Bob's We Fix It Place, he has to work or loose all and he gets $17.50 an hour which is a salary a lot of people in this town make or there about. Plus he has to work a full 40 hour week. That's $700 a week he makes and someone making about what he does is getting $230 more a week not working.

So see Joe is getting royally fucked at his secure job every week by those not lifting a finger to do a damn thing. But I guess 8:07 and your pal @ 8:36 or you yourself again, you think that's more than fair.

Firework going off this year were 10 fold more than any year I remember here in south Overland Park/northern Olathe and the shit is illegal here. My son worked a firework stand down by Paola with a friend and they were sold out by 3 pm on the 4th, owner said that's never happened since 1976 when he started sell them. I have heard many speak of all the fireworks going off compared to years in the past. Guess there must have been a lot more extra money floating around than people such as yourself think there is.

Some people might have needed an extra 600 a month maybe but not every damn week. You do know 600 a week is same as a $15 an hour pay.

Now a lot of people were drawing the max in Ks unemployment and that was $488 a week add the $600 to that and hell these folks are for damn sure going to want to stay home getting $1.088 per week over working for it.

No too many people made out like bandits on this extra 600 a week crap while others had to work and got nothing and getting a whole lot less for doing so.

The Bitter Truth is right the essential people got royally fucked here. And the part time losers who don't want to work made a killing.

Half of America was prepared for This for over a decade. The information was out there. Even in Movies. You still may have time to prepare .GET you a cash Flow. And stay out of debt. And save for the Disasters that are coming our way.

Perhaps some people are gaming the $600 in extra unemployment benefits, but certainly not everyone is--just like many large companies are gaming the Paycheck Protection Program. It happens. It's best to accept that it's not wise to let perfect be the enemy of good.

And I didn't detect an increase in fireworks this year.

Hey! Guess what I did on July 5? I spent about three hours cleaning up the fireworks and party mess my deadbeat tenants left in the street and on the lawns of my rental properties - five contractor bags worth! I know for a fact six of my eight tenants were still getting the $600 a week and now they have all indicated they are struggling with paying rent in July. I find it amazing that when I drive by the properties their cars aren't there most of the time, but on the 4th, it seemed they all had parties on my properties, then left the mess for me to clean up. God bless their little hearts. I am glad they enjoyed the racist holiday (I rent to three black families). So, yeah...$600 a week + unemployment, but apparently can put on the best fireworks show in town on my properties. 'Merica. Hope they all get COVID.

^^^^Your story's so touching, but it sounds just like a lie.

^^^^^I bet more truth to his than yours asshole.

11:46 - broad brush much asshole? there are those who abuse the system and those who don't. apparently, you think the majority of the population out there is a 'bus driver' who's gaming the system.

it doesn't matter, guys like you are always going to be getting fucked over by lazy people who milk the system. always gonna have a grievance. shitty way to go through life pal, always being pissed off. but you do you.

but he owns a lot of properties.