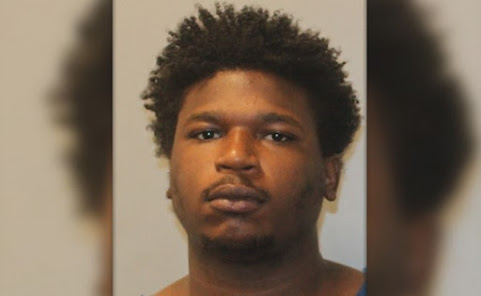 Terrifying allegations in this charging document narrative from the Courthouse today . . .

A 19-year-old Kansas City man has been charged in connection with the fatal shooting of a woman who was walking Monday morning with a 1-year-old in a stroller near 27th and Van Brunt Boulevard, Jackson County Prosecutor Jean Peters Baker announced today.

According to court records filed today, the defendant told police that he drove to a convenience store near 27th and Van Brunt Boulevard not long before noon on Monday. The victim, who was pushing a stroller with a child in it, left the store and a vehicle approached them. A male asked "Ain’t you Diamon." And the victim acknowledged she was Diamon. Someone in the car fired several shots. The homicide victim, Diamon Eichlburger, was four months pregnant, a witness told police. The defendant acknowledged in a police interview that he was the driver of the vehicle from which shots were fired. He posted on social media the crime scene and these words: "fucc a succa bitch she dead she dead." He also acknowledged that a passenger in his vehicle that he didn’t know was the shooter. He also said he didn’t know why the shooting occurred.

The homicide remains under investigation.

Jackson County Prosecutor Jean Peters Baker said other charges may come in this case against this defendant or others.

"This is a gruesome taking of a mother’s life in broad daylight," Baker added. "We will do all that’s within our power to bring justice to this victim’s family and the community."

Baker added that technology, including surveillance video and other electronic information, proved crucial in developing the case presented today to the prosecutor’s office. "We’re extremely grateful for KCPD’s quick work in this case," she said.
###########

Biden will fix everything said...

He be a gud boi. Was on his way to church when de girl disrespected him.

"fucc a succa bitch she dead she dead."

What the fuck is wrong with these kids

No mo baby, no mo baby momma gettin in they face. No money to baby momma, and he baby daddy is free.

Another person that BLM is not worried about. Not a peep. Weird

Hang him by his nuts.

If there is anyone at the jail who deserves to be shanked it's this asshole.


This is sad that guy is not bad looking. I wonder if he knows what is going to happen to him in prison? Killing a women who is pregnant not cool. This guys life is over or he will get messed up even worse in prison and wish he was dead.

I thought for sure the killer was going to be a white guy from Johnson County with an Audi, or a cop... I can’t believe a young black male would do something like this....

We need to get a handle on this systemic racism and power structures that made this nice young man blow her brains out. We need to get to work people.... oh yes and we need to listen .

It’s a product of two black people fucking whom were both likely accidents themselves.

They are chimps not kids

Why didn’t Petersucker charge this kolored boy with two counts of 2nd degree murder. She was pregnant after all. Oh that’s right, it’s not a human being until after the baby is born and the mother doesn’t want to abort it. Oh well, she’ll give him probation anyway. .

You must mean the white detective in kck, Roger Golubski, or the pharmacist from kc who killed over 300 and was gonna be released for good behavior?

The despicable dimwits want the right to kill the baby after it’s been born if they decide they don’t like it.

Your comment makes zero sense. I assume your trying to highlight/ communicate white people commit crime too...? You wanna go down this road ?

8:40 well at least theyre serving time in prison, the koloreds get probation for murder. So the pharmacist killed 300 people huh? Put the link for the article for that on here. clearly I nevar saw that.

“Facing the prospect of life in prison if convicted at trial, on February 20, 2002, Courtney pleaded guilty to 20 federal counts of tampering and adulterating the chemotherapy drugs Taxol and Gemzar. He also acknowledged that he and his corporation, Courtney Pharmacy Inc., had weakened drugs, conspired to traffic in stolen drugs and caused the filing of false Medicare claims.[2] According to law enforcement estimates, as well as his own confession, from 1992 to 2001 Courtney diluted 98,000 prescriptions from 400 doctors, which were given to 4,200 patients. Courtney admitted to diluting 72 different kinds of drugs. Besides chemotherapy treatments, he admitted diluting medications for diabetes and AIDS patients, as well as fertility treatments.[1][4] On December 5, 2002, Courtney was sentenced to 30 years in federal prison.”

Nope, I don’t see where he murdered 300 people.

Its not funny. I think soon something like this might happen in Johnson County. These criminals have cars. They can drive 10 miles west and they and their guns are in out neighborhoods in JOCO. I am already on low alert when I go places in JOCO. Just a raised awareness of people around me. Dont want it to get to high awareness. I do carry a CZ Rami 9mm. But hope to never use it.

Dude I hear ya. I’m on low alert too. I look at exits, people, and surroundings now. I carry my my G19 to go out to dinner to nice places. It’s crazy and scary times. We will get through this, but it’s gonna get crazier first.

Wikipedia: Courtney also was named as defendant in approximately 300 suits for fraud and wrongful death.[2]

He has his own page. He cut a deal on just 20 cases for a shot at parole. That's not 300 cases of fraud "or" death. Others have estimated thousands of deaths.

Let's be real: Who wants to pay to dig up grandma for forensic testing or slog through hundreds of cases when the perp is broke?

The point isn't the number of cases, it's the confirmation bias and inanity of such bias every time there is a black perp.

No, I'm not going down the road of statistical comparisons - that's a tough one and a wriggly can of worms not suited to internet discourse.

My feeling is that fingerpointing between races from a longstanding perspective of superiority, bigotry, and blame prevents movement or conversation towards rational solutions and delays reconciliation.

Yah. Scary times in River City. Its mostly BonB so if you're white you're still statistically more likely to be killed by whitey out in JoCo or anywhere in the US for that matter.

Everyone is on edge and weapon sales are way up. The election propaganda created a huge suck last time, and now we can add COVID and unemployment and protests. It's a tough time. Worse if you're young, black, and in the hood.

^^8:40- when you point out two white people , not noticing the 100 plus black killers this year. You must be some special type of retard.

He should be charged with two counts of 1st degree murder. Someone asked her if she was Diamon before firing. That proves premeditation.

Really? Where is the protest for her? LeGend? Go eat a bag of dicks. BLM only matters when it is not black on black crime.

A wriggly can of worms huh? It’s because you are wrong and numbers do not care about your feelings, or you shitty effort of extending your vocabulary.