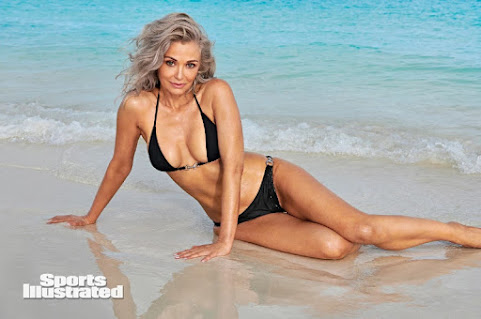 We start the day with #TBT inspiration and newsworthy & educational respect to a "veteran" hottie model who looks better than most 20-somethings as we take a peek at pop culture, community news and info from across the nation and around the world . . .

KANSAS CITY, Mo. - Even during the COVID-19 pandemic, there are certain universal truths that remain. One of those is the need for blood donations. "Cancer patients are still fighting cancer. Car accidents are still happening, and people need vital blood products to save their lives.

What makes a post office? If you've ever sent mail in Kansas City, you might have noticed not all post offices in the area are created equal. To figure out why some are so beautiful and others are purely functional requires digging through more than a century of history.

Never give up on your dreams. Kathy Jacobs just got her major life breakthrough. The petite 56-year-old is a brand new Sports Illustrated Swimsuit Issue model. She said it's important not to discount people because of their age or height.

Portland Mayor Ted Wheeler joined crowds to listen to protesters and answer their questions after violent clashes between demonstrators and federal forces.

(Bloomberg Opinion) -- After two months of what looked like a nascent recovery, the U.S. economy is faltering again. Restaurant reservations, one of the most commonly tracked indicators of local business activity, are stagnating:Americans are also a bit less mobile in July than in June:It's not hard

A 93-year-old former Nazi SS concentration camp guard has been found guilty of complicity in the murder of more than 5,000 prisoners. Bruno Dey was handed a two-year suspended prison sentence by a court in the German city of Hamburg. Dey had manned a tower at the Stutthof Camp in what was then occupied Poland.

Joe Biden has called Donald Trump the country's "first" racist president, saying the way he deals with people based on the the colour of their skin is "absolutely sickening". The presumptive Democratic presidential nominee's comments came during a virtual town hall organised by the Service Employees International Union.

Now that Andy Reid and Patrick Mahomes have a Super Bowl ring, what do they have left to prove?

KANSAS CITY, Mo. - On a cold day in January, members of the Kansas City, Missouri, Police Department stood face-to-face with members of the community with the downtown skyline behind them. FACE KC, a local nonprofit, and AGA Productions brought the group together to film a 'Cops Versus Community Rap Battle.'

NICK: YOU WILL FEEL THE HUMIDITY AS YOU STEP OUTSIDE. TEMPERATURES IN THE 70'S WITH A MOSTLY CLEAR SKY. 75 DEGREES. THE DEW POINT VALUE IS CLOSE TO 70. ANYTIME YOU SEE THE DEW POINTS NEAR 70 COME YOU CAN COUNT ON IT FEELING HUMID.

No the chiefs will not repeat.

Oh, Trump's a racist, all right, but he's not the first or even the most virulent.

Ha, Rap is part of the Problem. Gangsta saggin thugs think they need to do stupid ass shit to be Kool and the gang. The whole Thug culture is why the murder rate is 108 plus.

Gropey Joe's dementia has gotten so bad he's forgotten all about that racist boss he served under (and probably groped) for 8 years and then there's that shemale ObaMAO's married to who is a bigger racist than he is. Poor old Joe. He can't help it. He was born with his silver head up his ass!

^^Jeez Boomer, how many hours are you going to be on here today? Loser!

Hi lonely heart, anonymous drivel posting, bed wetting, Karen loser 8:24. This anger that you have toward seasoned citizens is quote contradictory considering that the guy you want to be president thinks he's running for Senate and doesn't know if he's shot, f*cked or powderburnt. You really need serious help with your anger issues LOL!

The Portland mayor is destroying his city by fueling the uneducated Marxist fags that think the feds are after them, the feds are there to protect federal property and it’s been proven over and over but yet the despicable dimwit mayor is egging on the violence and hatred at the cost of hundreds of millions of dollars in damages.

He thinks the feds are going to give him money for his stupidity and he’s got a very sad reality facing him, it ain’t gonna happen, none of the poorly run cities who have allowed destruction to happen are going to get any money from the feds.

The rioters are the occupying forces. They are terrorizing the very people that live there and the mayor is too stupid to stop it.

^^and yet not one word you said is true, coherent, or factual in anyway. Weird.


The mayor of Portland is a liar. Those people are not protesting they are rioting and they have destroyed the downtown area. The mayor said in a speech to them that he wanted to thank them for fighting against the Trump administration. I know someone who works nights in Portland and it is a dangerous situation there. The Portland mayor says it's unconstitutional for Trump to send in feds to help. NO it's not and the mayor got gassed because he was inciting violence toward them. People need to find out the truth about this. The mayor has also allowed these rioters to close business downtown people can't even go to work and some businesses have closed for good.

I would say that Woodrow Wilson wins as the most racist president. He was a Democrat.

^^and yet not more racist than Trump. Weird.

the pig thug rap fucking sucked, they should never do that stupid shit again

8:44: And yet Andrew Johnson would beat Wilson in a walk. And he was also a Democrat, which was the party of racists until Nixon convinced racists Republicans would serve their interests better. Weird.

Again, we need to thank Tony for his service to the community by giving unhappy people a way to feel (if falsely) they're making a contribution to society.

^^true that! Jeez, these people are the worst are city has to offer. No wonder they're so busted, broken, and bitter!

Isn't that cute?!?! The lonely heart, anonymous drivel posting, bed wetting, Karen loser has another Grindr monkey to play with. You two are so cute together 9:00 LOL!

^^and you're so lonely! Look at the time between your posts... Jesus you're so desperate for attention. Why do you think everybody hates you?

Jesus loved you lonely heart, anonymous drivel posting, bed wetting, Karen loser 9:13. Everybody else thinks you're an asshole but Jesus loves you LOL!

Anonymous As All Hell said...

Bandit, old Pal, there are a few of us out here as "seasoned" as you are that think you're the asswipe, hiding behind the fictional name of a sleazy third-rate character played by a b-class "Movie Star" in a long-forgotten picture, and posting complaints about others who post "anonymously"!

Well, dimples, we Anonymous really enjoy your pissy little faggot ranting, but it's wearing a little thin - try to find something new to throw your hissy-fits about, okay?

Never understood why we didn't punish the Japanese, take their land, prosecute the Nazis (other than the few at Nuerenburg), penalize the Italians and HELP the poor Russians after they were almost wiped from the face of the earth by Hitler. Instead we sheepishly did nothing, just gave aid to our former enemies and walked away. Said we wanted to "forget it" and "get on with our lives". The perfect way to entice another country like IRAN, Syria or Iraq to try and expand and take over its neighbors. After all we have even more liberal policy now.

Slap the Japanese emperor on the wrist, let him live in high style while our GI's missing arms, legs, eyes have to suffer for decades.

Sadly, it's true. Rap enables a thug culture based on rape and murder. The funniest part is these idiots are making money for white record execs who don't care how much blood flows in the streets.

Chimpster! Hurry up with that shinebox!

After decades of chasing her swimsuit modeling dreams, Kathy finally accomplished her goal of being objectified as a sex object for old men and MILF-seekers!!!

Amazing they let a Nazi convicted of killing thousands of civilians "off the hook". Just a suspended sentence. But we spend lots of time trying to find intercity kids that have shot 1 drug dealer dead. Society is backwards. They should have hung that NAZI in the city square. Passing of time doesnt mean you dont pay for the crime!

(I will add that I do hate the evil the Nazis spread during WWII. They deserved total defeat, the fire bombings of Dresden, the poverty and the ruined families and orphaned kids too - as THEY STARTED A WORLD WAR). If you want to start a huge war - first stop, then count the cost of losing it!

Yes that Nazi should have at least gotten life in prison. I mean live witnesses just testified against him and they were his victims. My Uncle shot 7 Nazi soldiers dead in WWII. The Army gave him a cheaply made .45 caliber "grease gun" instead of a battle rifle. Several Nazi's acted like they wanted to surrender - but would you trust a Nazi who was just shooting at you a moment earlier? He mowed them down and never looked back. All my uncle wanted to do was stay on the farm near Topeka and raise corn - instead he ends up in Berlin during the biggest war in history - he was gonna make those Nazi's pay for that!

A 93-year-old former Nazi SS concentration camp guard has been found guilty of complicity in the murder of more than 5,000 prisoners. Bruno Dey was handed a two-year suspended prison sentence by a court in the German city of Hamburg.

Really? 5,000 murders? Must have been Nazi influencers in the court!

Haven't you heard @2:30?
Trump's supporters agree that the Holocaust is all a Hoax -
just something designed to make Trump look bad.


props the the older blonde hottie! taking good care of herself. 56 yrs old and still got it!

In post-war Germany, many Nazi officials got government jobs after the war, some ran large businesses and some joined the police forces. The USA hired many to work on NASA's rocket programs. It shows how people accept evil if it is to their advantage. If the ex-Nazis working in public jobs had personally cost German or USA citizens say a $100. per month, they would have never put up with it! But if there is no personal cost, and even a slight advantage, nobody cares

I read a report created by the European Union some years ago - if Germany had not started WWII and severely set the world back financially, there would be basically no poverty in the civilized developed world, free education worldwide, free medical care and much reduced cost of homes and much higher wages. Our standard of living would be very high and the $$$ of the world would not be in basically the top 1%'s hands. That war sucked huge amounts of money from all countries and converted it to smoke, bombs, death and destroyed cities. Stalin wanted to shoot each German male between the age of 16 and 70 after the war. Churchill vetoed that idea. Germany's WWII damage makes the covid19 look like a nice gift from China. Plus add Germany's WWI damage to the tab too. Who is the real enemy of the world? Its not Muslims! Or Russia!