The newspaper chain that owns Kansas City's so-called paper of record is on the auction block. A hedge fund is likely to take over and squeeze every penny about of the fading biz before they sell it for scrap.

Meanwhile, newsies who really know the biz understand that non-profit journalism doesn't work and is rendered impotent by the whims of donors who turn every publication they touch into a mirror of compromised elitist, irrelevant politics.

Still, what's important about this statement is that it reveals the once mighty newspaper struggling to survive and desperately in need of charity.

"Deciding the fate of a newspaper company in Chapter 11 is about so much more than creditors and shareholders; it’s about readers. As the mayor of a McClatchy city, I would urge you to choose a steward for this company that would build on the journalistic traditions of two of the most storied names in the business—McClatchy and Knight-Ridder—rather than degrade them. The good news for a responsible owner is they won’t have to do it alone. Journalism-focused philanthropy has nearly quadrupled since 2009. Thirty journalists in McClatchy newsrooms around the country are fellows funded by Report for America, including three in our local newsroom, who have traveled to Kansas City from all corners of the country to focus on gun violence throughout the state of Missouri—perhaps the most pressing issue in the urban centers of our state."

Here's a look at the text from the letter in its entirety: 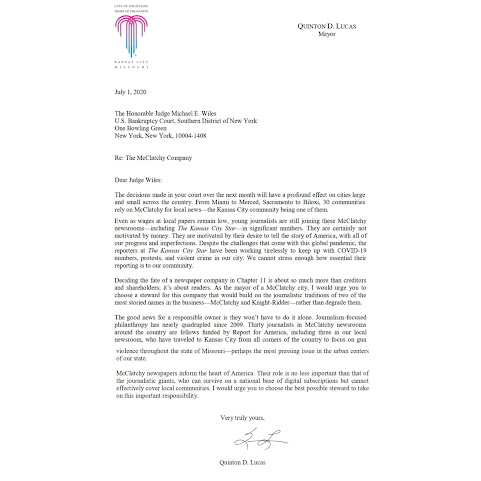 go ahead and sell it. Not sure how many subscribers will notice. Most people just read it now out of habit.

Yeah. Get the 7 subscibers to write a letter too.

Are you saying folks still pay the outrageous overpriced subscription cost for that liberal rag?

I dumped that thing almost 25 years ago when Jerry Heaster, one of the very last conservative writers left. I do still use the Wednesday ads for oil changes and frying bacon.

In some cities and towns the local universities are providing newspaper service. Perhaps UMKC's j-school could take it over, and the business school could use it as a project--like they did with the Cornbread Buffet.

Heck, it even become easy to get a copy at the Public Library, no waiting at all.

There is no "gun violence throughout the state of Missouri". Only in the Democrat controlled cities of Kansas City, Columbia and st. Louis.

So now Lucas is trying to save the Star?
No wonder the editorial board has their head so far up his butt!
How can any serious reporter who might actually believe in objective factual news reporting allow their reputations to be ruined by working for this pitiful rag?
Conflicts of interest for all the world to see.

10:17 IS CORRECT. QUIT TRYING TO WEASEL OUT OF YOUR, REPEAT, YOUR PROBLEM LUCAS. MORE KNEELING IS REQUIRED.

Thank you for your letter concerning the future of The Kansas City Star newspaper, a McClatchy affiliate. Let me be frank, you don't have a clue.

The fate of the McClatchy Company is before the Bankruptcy Court only because it's management has repeatedly failed over many years to take the necessary steps to maintain it's viability. While unfortunate for those negatively impacted, it is a fact in business life that some companies will flourish and prosper, while others are poorly managed and fail. Ultimately, this is not a bad result. What the business sector should not do, and what this Court will not condone, are misguided rescue efforts to enable a dysfunctional company to remain in business.

Mr. Lucas, I would politely suggest that you and others in the Kansas City community focus your efforts on finding a replacement for the failed McClatchy affiliate in your city, rather than enabling a bankrupt operation to stumble forward. Just as a forest fire is painful in the moment, in the longer-term it clears away the dead brush and makes room for green shoots to reach skyward.

Thank you again for your letter, and please extend my best wishes to the TonysKansasCity blog in your fair city. How's that homicide epidemic in KCMO?

Why would the boy blunder support such a miserable and divisive newspaper?

Why does he continue to divide the city with his constant support of things the citizens don't want?

What the hell is wrong with him?

It's understandable since the Star is just a mouthpiece for the Democratic Party.

Most Star subscribers are still trying to figure out how to turn on the computer.

Journalistic tradition? Journalists are supposed to be objective. That died a long time ago. Now, they've been replaced by left-wing hacks.

adam smith wrote about "creative destruction" as part of the natural process of capitalism.

sometimes it's actually fun to watch creative destruction play out.

If TKC becomes the new written news in Kansas City, will TKC become corrupt and evil, too?

If a good newspaper is essential to the functioning of democracy, a bad one destroys democracy.

he's learned trump's techniques of distract and criticize the press.

SAT analogy: lucas is to murder mayhem as ------- is to corona surge

This means the kansas City Star will not repay thr millions that they owe to the City of Kansas City, Missouri for the building of that glass monstrosity they called a headquarters.

As a former suscriber, watched the Red Star over the years slide deeper and deeper into leftist Marxism and canceled our subscription as not a supporter of Communism.

for an investor, the question is whether there's any chance of salvaging something.

the answer would seems to be no: it'd be better to start from scratch.

we sometimes read mcclatchy newspapers in other cities and find them to be better than our local paper.

So the KC Star is inspiring him? His IQ must be lower than I thought. But then he is just "Q", right? Does anyone know if he has seen a doctor about the weak knee problem he seems to have? Asking for a friend.

11:42, journalists and the papers they worked for have never been objective, but at least they tried harder to be than they do now. The Star is biased well beyond the point of intellectual dishonesty. Maybe its new hedge fund owners will try to put out a more objective product. If so heads will roll, and Lucas will lose some free propaganda.

Lucas is an anchor bringing down the sinking ship. Why Lie ? True dat.

I would rather read TKC than the Star.

1. Read the newspaper
2. Make a call on a landline phone
3. Rent a video at Blockbuster


of course Lucas and the libs want to keep the shit-Star around, to keep spreading Democrat BS propaganda

The KC Red Star is great if you want yesterday's news.

4. Write a letter to a friend

6. Call my stockbroker to buy a stock

8. Turn on the attic fan to cool the house

9. Wash my car by hand with a hose

10. Write a letter to the editor

The star should be liquidated and the hedge fund owners should send a bone to Putin for helping.

No poor people can afford to buy it.
It’s an elitist product made by liberals who hate America.

Simply put- how many subscribers do they think they would have?
Journalism? Maybe if you like Jason Blair.