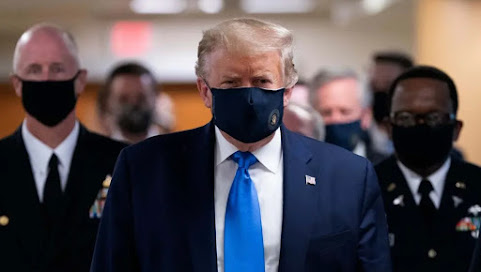 In this collection we focus on community news, a few hopeful links and some of the top info from across the nation.

President Donald Trump wore a mask during a public visit to Walter Reed National Military Medical Center on Saturday, after long resisting bipartisan prodding to lead by example and demonstrate to Americans the importance of wearing a face covering to prevent the transmission of coronavirus.

The former special counsel Robert Mueller made a rare move on Saturday to publicly defend his two-year investigation into allegations of collusion between the Trump campaign and Russia in the 2016 election - and to castigate US president Donald Trump's decision to commute Roger Stone's prison sentence.

Hard Times Ahead As Coronavirus Worsens

The one certainty about the outlook for companies in a COVID-19 world is that second-quarter earnings will be very bad - the worst, in fact, in more than 10 years. Although Wall Street is betting that earnings will start bouncing off the bottom in the third quarter, the beginning point for that bounce is unknown, and early indications suggest the rebound's magnitude may not match investors' hopes.


'It's heartbreaking': Many come out to pay respects for 3-year-old KCK girl found dead

KANSAS CITY, Kan. - A Kansas City, Kansas neighborhood is sharing in a family's grief. A Saturday night prayer vigil has brought crowds of people to 34th and Steele, in the city's Argentine neighborhood, where a makeshift memorial has been made to honor 3-year-old Olivia Jansen.

Walt Disney World in Orlando, Florida, closed in March, as the coronavirus pandemic escalated in the U.S. Now, it's beginning a phased reopening as cases surge in the state "This morning marks another milestone in the phased reopening of Walt Disney World Resort, as Magic Kingdom Park and Disney's Animal Kingdom Theme Park welcome guests for the first time in several months," the park said in a statement.


'Souls to the Polls' organizes car caravan for voters

KANSAS CITY, Kan. - It's a socially distanced way to get out the vote in Kansas City, Kansas. "This is called a rolling billboard. Cruising for voters," said Dr. Elizabeth Ann Sanders, committee chair of Souls to the Polls.

NORTHEAST KANSAS (KSNT) - Severe storms started to pop-up in the northern counties of northeast Kansas around lunchtime Saturday, leaving some areas with grapefruit sized hail. One cell stayed in-tact for several hours with hail reports coming in at grapefruit size, or 4 inches in diameter, over Wabaunsee county.


The internet is changing drastically for Hong Kong's citizens

The big picture: It's only been one week since China passed a controversial national security law that gives it vast new powers over Hong Kong, but the internet has already changed dramatically for people in the semi-autonomous city. What sort of powers? The law lets mainland Chinese officials operate in Hong Kong for the first...

President Trump on Friday pledged to sign an executive order creating a "road to citizenship" for "Dreamer" immigrants - although a press secretary later backpedaled on the plan and some experts say he's not authorized to do so. Trump told Telemundo anchor Jose Diaz-Balart that the order would lead to citizenship for Deferred Action for Childhood Arrivals (DACA) recipients.

The first 2020 presidential debate could be a battle of the brains. Former Vice President Joe Biden said Thursday that he's eager to debate President Donald Trump, mocking his intelligence. "I can hardly wait. I can hardly wait to deal with what he refers to himself as a 'stable genius,'" Biden told NBC affiliate WBRE at a campaign stop in Pennsylvania.

I saw that he wore a mask previously when he visited an auto plant but didn't do it when he was around the workers. Glad he finally put one on now, it only took him months after everyone else.

it was a hospital visit so it makes sense.

The Trump administration has denied a request by Minnesota Governor Tim Walz (D) for $16 million in federal aid to help rebuild widespread damage in Minneapolis caused by rioters protesting the death of George Floyd.

I'd suggest taking the cognitive function test again. It's likely he paid someone else to take it, just like his SATs.

“It’s going to disappear. One day, it’s like a miracle, it will disappear.”

Glad somebody on his staff explained to him that the Cofefe-19 mask is worn over the nose and mouth, rather than over the eyes as he has been doing.

I used to have some respect for Mueller, but he can suck it. The guy spent millions of our taxpayer money on a big fat nothing burger. Adam Schiff and the DNC should foot the bill for that farce, one of many farces brought against a duly-elected president and his staff at taxpayer expense.

He was at a military hospital and followed protocol just like he did at Ford awhile back.

PS Mueller should be shot by firing squad right after fauxi

When President Trump was shown a scan of Joe Biden's empty skull at Walter Reed Medical Center, he said it was not a grey matter!!!


Demosleazeballs scamming dummies in KCK..first they tell them how to register..

then they tell them how to vote

And yet, the country is still going to vote out this buffoon.

Trump lied; Americans died. 131,445 dead and rising. No end in sight. Send the kiddos back to school and watch exponential children and parent infection. Many parents will become ill quickly. Some will die. WINNING!

All the stupid people are falling for China's plan to destroy our economy with COVID-19 and get Trump out of office. China wants their buddy Biden in office so they can find another presidential patsy to easily push around. What a bunch of suckers who probably think WWE is real.

Trump shut down the Chinese flights with Chinese citizens on them, saving millions of lives as he was called a racist for it by Biden and others. Nancy Pelosi was telling people to party in Chinatown at about the same time.

^^^ Trump didn't cancel a single flight from China or anywhere else. Not one.

Our President wears his mask so goodly. He wears his mask better than anyone . Lots of people are talking about it..... Fortune Cookie Corona is not the Presidents fault. It was Benghazi and Hilary’s Emails that caused it. Everybody knows this !

Race Pimp Don Lemon should be removed from CNN.

Good luck with that chuds.

Stabilized the Economy after the two Recessions and a pointless unsuccessful War during the previous Administration.

Established trade relationships that greatly benefited the US Economy, while Congress ran around in circles with its hair on fire.

Restored the Economy after a (Depr)Recession that did more damage to the Middle Class than anything since Reagan's Big Crash.

Oh, and IMPEACHED and incompetent Asshole!

Any Democrat who listened to Biden debate during the Democrat campaign should be scared to fucking death of him debating Trump.

We nominated an establishment do-nothing with dementia and too many of us can't see that. We're no better than the Trumpbots.

^^^^And yet we're not scared of a debate, and most of us would vote for an inanimate object before we'd vote for the orange buffoon. Weird.

^^^ But unfortunately for you not looking like an idiot, he's correct.

DREAMERS CAN STAY? PATHWAY TO CITIZENSHIP???

Fuck this lying asshole. No wall so no vote.