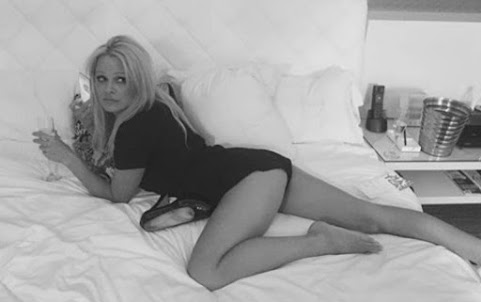 This 4th of July morning we're inspired by a bit of iconic Pamela hotness along with with community news, pop culture and info from across the nation and around the world.

A Kansas City pet store is having to completely change the way customers get to look at puppies.

Members of the Kansas City Royals deal with the heat at the start of Summer Camp training at Kaufman Stadium in Kansas City, Missouri on Friday, July 3, 2020. Major League Baseball is finally starting their 2020 season after the COVID-19 pandemic caused months of delays. Photo by Kyle Rivas/UPI

Pamela Anderson still got it, even on her 53rd birthday, that fell on July 1. The blond bombshell, who shot to fame with "Baywatch" and other movies that involved skin show, may not be active on the silver screen anymore, but she still managed to make an impression on her fans.

Prez Trup Proclaims 'We Will Not Be Silenced'

In a fiery Mount Rushmore speech Friday night, President Trump slammed what he called the "left-wing cultural revolution" that has led to "mayhem in the streets" and the toppling of historic statues. "They want to silence us. But we will not be silenced," Trump said to cheers of "USA! USA!"

The US Navy will send two aircraft carriers and several accompanying warships to the South China Sea in the coming days to participate in a military exercise, according to two US Navy officials.

Fox News contributor Tammy Bruce addressed the issue of "gender stereotypes" Friday while reacting to the story of a woman who claims Ghislaine Maxwell raped her between 20 and 30 times, beginning when the alleged victim was just 14 years old in 1991.

As Congress is headed for an 11-day crunch to agree on a new rescue package and have it signed by President Trump before a key provision of the $2.2 trillion CARES Act expires-with millions of Americans unemployed and new cases of the coronavirus soaring to alarming levels-here's what's at stake in the next round of legislation.


Britain has one of the world's worst Covid death rates. Now many fear it's about to drink itself into chaos

(CNN) - The thought of a pint of beer in a proper pub is a dream that has sustained many people in the UK through the tough months of coronavirus lockdown, but as the doors to drinking establishments finally reopen after four months on Saturday, a potential nightmare looms. Just a week after thousands of British people flouted social-distancing rules to crowd beaches in a heatwave, it's feared the heady mix of alcohol and a sense of liberation from restrictions, at a time when daily infections are still in the hundreds, could prove disastrous.


Woster: Potato salad and the cousins from Kansas City | The Mitchell Republic

My mom used to make incredible potato salad for the main meal on Fourth of July. She really brought her "A'' game to potato salad on Independence Day. I don't know the ingredients - probably potatoes and, you know, other stuff from the pantry - but I know it was top-notch.

KANSAS CITY, Mo. - It's been around ten months since Ricky Kidd was exonerated. Since then, his life looks completely different. He describes it as a wild and fast roller coaster ride with a whirlwind of meaningful and surprising moments. Kidd was freed from prison in September after spending 23 years behind bars for a [...]


Some areas could rain Saturday, but clearing for fireworks

Hide Transcript Show Transcript THE FORECAST THIS AFTERNOON WILL BE FOR POCKETS OF HEAVY RAIN, SOME OF IT WILL BE LIGHT. SOME OF IT WILL HAVE LIGHTNING, SOME WILL NOT. THAT IS JUST THE NATURE. NOT LASTING ALL DAY THANKFULLY, AND MORE IN POCKETS WHEN IT COMES THROUGH.

Pam still in pretty damn good shape at 53. Holding up much better than Kansas City.

how does a woman rape another woman between 20 and 30 times?

Trump is right, the massive brain washing from the Chinese and Russian run us media is beginning to take its toll on the average American.

It has to end. The despicable dimwits are behind all this and they aren’t smart enough to control it or know what to do when their own brain washed idiots come after them.

Another civil war is coming, to coin a phrase of old..... the south is rising again!

8:28 fat black lesbians do it all the time

If Pelosi lowers her mask every time she talks, she might as well not wear one at all. It's obvious virtue signaling on her part.

Snowflake, what you're seeing is democracy inaction.

If it frightens you, that's just too damn bad.

No, civil war is not coming.

Just some right wing gun owners looking for someone to shoot.

You right wing nutjobs are so cute when you're triggered!

8:34 like I mentioned to another about fifteen years ago - you all better hurry up or you'll lose......again.

Something else - you can credit the black girl for help keeping the white southern bloodline{s} from being contaminated from the northern strain of white man.

Took a while to learn and I understand now.

Solution is too simple to explain here, but it isn't "gun violence". Next time you see a gun walking down the street shooting, take a video. You'll be famous as the first person to ever photograph a live gun.

Pammy is only 53? Shit she looks about 75. Drugs and alcohol can really take their toll.

There are males over the age of 17 living in Kansas city?

The sixties radicals often changed and went to work on Wall Street in search of $$$.

I don't expect Epstein's girlfriend to see Sunday morning. Bill Barr's DOJ is going to off her just like they did Epstein.

Bill Clinton's hitmen are going after her soon, just like they did Epstein.

Trump's the worried one. He keeps firing SDNY attorneys in an attempt to stop this case.

Epstein was done in under the supervision of Trump's AG Barr.

Q-anon might be right about a world wide child sex ring involving some of the worlds most powerful leaders. They are just in denial about Trump being the head of it.