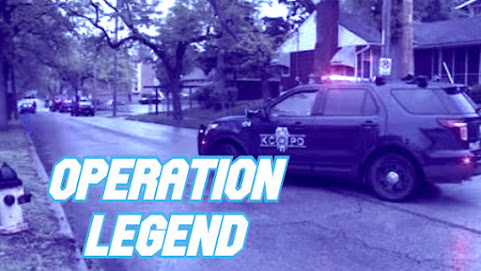 In an effort to communicate more effectively with the public, here's the latest update from a collaborative local police & federal law enforcement crackdown that has sparked protest from a coalition of urban leaders . . .

KANSAS CITY, Mo. – U.S. Attorney Tim Garrison announced today that 97 arrests have been made by local and federal law enforcement officers in less than two weeks since the launch of Operation LeGend.

“This is the impact of a targeted initiative to reduce violent crime, carried out by local and federal law enforcement working together,” Garrison said. “Many of those who were arrested were illegally carrying firearms or illegal drugs. By bringing them to justice, we reduce the level of violence on the street and the threat of crime in our neighborhoods.”

“This is our first detailed report to update the public on the progress against violent crime that has been achieved as a result of Operation LeGend,” Garrison added. “We are striving to maintain as much transparency as possible for an ongoing law enforcement operation. I’ve been communicating with local pastors, community leaders, victims of violent crime, and public officials, and will continue to provide regular updates.”

Among the remaining 88 arrests, 49 were fugitives with either state or federal warrants for their arrest. The remaining 39 non-fugitive arrests were referred for prosecution in state court. Five arrests were for homicides. Other offenses cited in the arrests included assault, drug trafficking, illegally possessing firearms, robbery, child molestation, and sexual assault.

In addition to the arrests, agents and officers seized 35 firearms, a total of nearly three kilograms of methamphetamine, hundreds of pills (including Oxycontin and ecstasy), heroin, cocaine, crack cocaine, and nearly $40,000 in cash.

Operation LeGend is a federal partnership with local law enforcement to address the increase in homicides and violent crime in Kansas City, Mo., in 2020. The operation honors the memory of four-year-old LeGend Taliferro, one of the youngest fatalities during a record-breaking year of homicides and shootings. Additional federal agents were assigned to the operation from the FBI, Drug Enforcement Administration, the Bureau of Alcohol, Tobacco, Firearms and Explosives, and the U.S. Marshals Service.
****************

It's about time we started cleaning up the city.

This is a good start.

The protests against this type of federal assistance in KC will prove to be the watershed moment for the local BLM movement. There is no logical or reasonable argument against these results, and there will be no public sympathy coming their way in their protests against it. Their smart move would be to shut up about federal "occupation" and stick to demands for free rent and the removal of "oppressive" inanimate statues.

That's a good start. Many more out there. Keep going!

Sounds successful. Shameful the Democrats are against removing criminals from society

That'b because they need their votes 5:58.

This quick success means one of two things, either:

1. It was a horsepower issue and the extra 200 federal agents gave them the manpower they needed, which doesn't bode well for the "defund the police" argument, or...

2. It was an issue of ability, and the feds brought in capabilities not possessed with the KCPD, which doesn't bode well for the "local control" argument.

It's no mystery 6:03. Q Boll won't let the police do their job and our prosecutor isn't worth a shit. These are federal charges so neither have a say.

Oh boy Obama and Sly aren't going to like seeing their work undone with this kind of efficiency.

I wonder if the dreadlocked protesters are outside of the PD lockup demanding that these fellow "brothers and sisters" are released? Is Stacy Shaw on her way there with her megaphone and stack of business cards?

The only place Shaw rushes to is the all-you-can-eat buffet.

Multiple arrests for ignoring lawful orders in the last few weeks, shouldn't the ethics board of the Missouri Bar be looking into this? As an officer of the court, this is against the Code of Conduct.

They personally profit from the violence. They try and hide the audits exposing their corruption.

If the law is applied, Democrat leaders don't get enriched off the innocent blood being shed.

That's why they protest child killers being arrested.

Maybe Nancy palooza can send in her storm troopers to shoot up the “summer of love” participants!

I agree that we do not see the jackboots on the ground that other cities have seen. Dem Mayors of those cities are concerned because the DHS is complicit in escalating the cycle of violence as a media opportunity for political gain. Specifically, DHS is undertaking actions against protestors that are not in reponse to threats against Federal assets.

The occupation concerns in other cities are due to CBP, ICE, and DHS agents. Agents are covering up personal identification to avoid personal liability for constitutional violations. They have been filmed repeatedly violating court injunctions against targetting journalists with munitions. I believe some local police forces and cities have threatened to begin arresting Feds if abuses continue.

I have read that the FBI, US Marshals, and BATFE agents conduct themselves more professionally. Thankfully that is who we have in KC and the arrest results speak for themselves. Q is sensibly resisting calls to oppose this type of Federal presence.

There is a decent article on The Intercept about the various Federal forces appearing in our cities on the runup to an election.

Mayor, it is either a skill or will issue.

So either you don’t have the skill to produce similar results or the will to do it.

Advice: Be thankful and send a Hallmark thank you to the Feds leader.
Or resign.

The Feds just showed you it can be done and how to do it.

You going to give more criminals amnesty and impower more thugs?

There is a third option. The Feds have access to surveillance technology that allows rapid identification and geo-location. This is Federal level expertise and is independent of current funding and/or city vs state control of KCPD.

How many of those arrested were black? Probably nearly all. Racism again, like always.

Yet Q has now said several times that he supports the KCPD and "proportional" Federal anti-crime efforts in KC.

The disagreements were over escalating tactics against protestors, not murder and serious crime. As to JPB, I totally agree.

Congresspeople of both parties are major investors in for-profit prisons. And enjoying a nice return on their investment.

Did you not get the memo where Q requested help? FTW? Puhleeze people.

So when will they arrest Lucas for impersonating a pubic official?

Good, this is what was supposed to happen when Operation LeGend began. Like it or not. I sure hope City Hall is okay with all this law and order. It's been pretty quiet over there the past week.

Missouri doesn't have private prisons. Whataboutism proves your liar rhetoric is to be ignored.

Awesome job by the Feds. Now arrest Q Ball for being a sham. These Dem politicians are real pieces of work, for lack of a better word. Do they really think these rioters will actually vote. They’d have to show up then figure out how to use the machines. Won’t happen. Lib shit doesn’t play with normal people.

7:28 is wearing a tin foil hat and the “secret government troops” are coming to get you!!!

No thank from Mayor Q for this roundup of bad actors.

This case is being prosecuted by Assistant U.S. Attorney Bruce Rhoades. It was investigated by the Kansas City, Mo., Police Department, the FBI, and the Buchanan County, Mo., Sheriff’s Department.

KC Metro Strike Force
This prosecution was brought as a part of the Department of Justice’s Organized Crime Drug Enforcement Task Forces (OCDETF) Co-located Strike Forces Initiative, which provides for the establishment of permanent multi-agency task force teams that work side-by-side in the same location. This co-located model enables agents from different agencies to collaborate on intelligence-driven, multi-jurisdictional operations against a continuum of priority targets and their affiliate illicit financial networks. These prosecutor-led co-located Strike Forces capitalize on the synergy created through the long-term relationships that can be forged by agents, analysts, and prosecutors who remain together over time, and they epitomize the model that has proven most effective in combating organized crime. The principal mission of the OCDETF program is to identify, disrupt, and dismantle the most serious drug trafficking organizations, transnational criminal organizations, and money laundering organizations that present a significant threat to the public safety, economic, or national security of the United States.

You are missing some VERY key points here.

DHS cannot use vehicles with GOV tags in Portland due to being tailed and/or vandalism and arson.

The reason they are wearing #'s is due to doxxing and threats being issued.

The reason for the snatch and grabs is due to Antifa swarming with around 30 people attacking the officers in order to let the person escape. There are videos of this online.

It also came out last week, they had people stationed near government buildings in Portland taking down license tag #'s, so they could run in a system. They then assembled spreadsheets with their personal information like addresses, phone numbers and names of their family members.

Also, some of the people claiming to be journalists in Portland, are not in fact who they claim to be.

THERE are VERY valid reasons for DHS to operating in Portland as they have.

These are not "protesters" but violent anarchists.

Will the Feds go after Nick for selling guns out of the KCKS evidence room when he worked there? He got people good deals!

I heard the Mayor deputized the old white ladies he met down at the Ozarks to fight the crime in this city.

Taking guns off the street and out of the hands of bad guys! I look forward to the Star's much ballyhooed coming series on gun violence, in which surely they must praise the federal law enforcement agents for doing such a great job.

Sarcasm, of course. For the Star to say good things about the feds would require a standard of objectivity that the Star has not had in many years if ever.