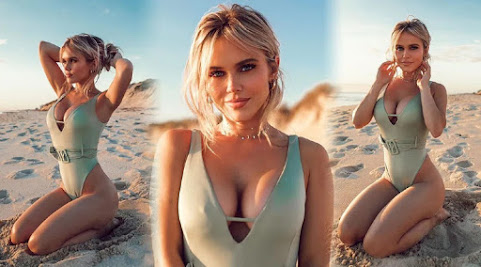 A roundup of pop culture, community news and info from across the nation and around the world . . .

KANSAS CITY, MO (KCTV) - Money might be tight during the pandemic, but something everyone has to do is eat. Construction of a new apartment complex in Midtown forced the owners of Mesob, a restaurant specializing in Caribbean and Ethiopian cuisine, to move across the street last year.

Australian model Hilde Osland knows how to make a swimsuit look good. On Tuesday, the blond beauty brought some heat to her Instagram with an update that saw her soaking up the sun on a beach while flaunting her curves in a pale green swimsuit.

WASHINGTON - The U.S. ambassador to the United Kingdom, Robert "Woody" Johnson, told multiple colleagues at the U.S. Embassy in London that President Donald Trump had asked him to see whether the British government could help get the British Open played at his Turnberry golf course in Scotland, a former State Department official with firsthand knowledge told NBC News.

GOP Slowly Gets On Board More Checks For Americans

Republican and White House leaders are struggling to gain internal consensus on an initial stimulus package proposal. During a lunch meeting on Tuesday, Senate Republicans repeatedly clashed with each other as well as with Treasury Secretary Steve Mnuchin and Trump Chief of Staff Mark Meadows over the bill.


'Symbols of bigotry and racism.' House prepares to vote on removing Confederate statues from Capitol

WASHINGTON - The House is scheduled to vote Wednesday on a bill to require removal from the Capitol of all statues honoring those who served the Confederate State of America during the Civil War. House Majority Leader Steny Hoyer, D-Md., who introduced the bill, said at a Wednesday press conference removing the statues was an act of "principle and conviction."

Ministers are looking at strengthening security laws after a report by MPs said the UK had "badly underestimated" the threat of foreign interference, including subversion by Russia. A new law requiring foreign agents to register in the UK is believed to be under consideration by No 10.

TAIPEI (Reuters) - China is stepping up military preparedness to overtake Taiwan, the island's Foreign Minister Joseph Wu said on Wednesday, following a recent spike of Chinese drills near the island which Beijing considers its own. Taiwan has complained that China has stepped up threatening military activities near Taiwan in recent months.

KANSAS CITY, Mo. - Kansas City Royals infielder/outfielder Hunter Dozier will start the season on the injured list after the club announced Wednesday he tested positive for COVID-19. Dozier, 28, is coming off a breakout 2019 season in which he batted .279/.348/.522 with 26 home runs and 84 RBIs.

Hide Transcript Show Transcript THE ROCKIES, ARKANSAS AREA, AND ALSO THE OZARKS. SUNSHINE FOR US, CLOUDS MAINLY TO THE NORTH. 86 BY 7:00. BACK TO THE 70'S THEREAFTER EVENING. NOT MUCH TO WORRY ABOUT WITH REGARD TO RAINFALL. CLOSE TO 70 DEGREES, 69, LEAVENWORTH.

After what BLM has done to this city and country they do not deserve my dollars being given to their businesses. I hope they all go out of business soon. Kiss my ass!

How many ways is this crook going to use his golf courses to profit from his office?

Wasn't he going to be too busy to play golf or run his private businesses?