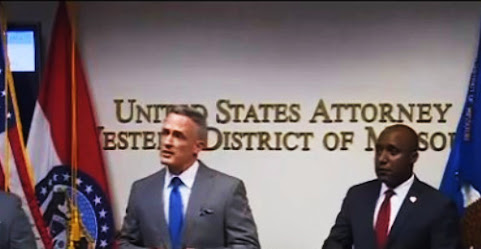 Community leaders, activists and social media "journalists" have argued against an upcoming crackdown on local streets.

Accordingly and given that the main focus of today's presser seemed to be damage control in order to help the Mayor's credibility among skeptics . . .

Garrison said more than 400 federal agents are already here, and the additional forces would just supplement what’s already happening. He said that each agency has specialties that help quell crime.

“FBI is well known for their strength in conducting complex investigations. The ATF (Bureau of Alcohol, Tobacco, Firearms and Explosives) brings just an amazing level of technical ability… DEA (Drug Enforcement Administration) is excellent in identifying those actors who, as you can see in the stats, are related to those incidents of drug-related violence. The U.S. Marshals Service is excellent in tracking down wanted fugitives,” Garrison said. “We’re trying to use evidence-based, targeted enforcements against the most prolific, violent offenders.”

Lucas also said that his office is working to supplement law enforcement with other methods.

“My office is also working with the Department of Justice to try to obtain grants related to mental health treatment, to help find grants to help conflict resolution, de-escalation, so many important goals in connection to what we do,” Lucas said. “But we also know that we need to find justice for families and justice for victims.”

KSHB: Federal involvement in the area crime problems has received mixed reactions, with some concern that it could mean police militarization.

KCTV5: The U.S. Attorney for the Western District of Missouri and the mayor of Kansas City laid out details of Operation Legend on Wednesday.

Actually, they shouldn't deny it too strongly. It's good to have the criminal class just a little bit scared of trouble coming their way. For your average resident of KC, the feds coming to town doesn't really make a difference.

So many people getting shot in KC. We obviously need some help to control the problem.

Actually, if you look at Kansas City, there are a lot of people who have been BEGGING for the national guard because the violence has become so bad.

400 already here? Hundreds more on the way. Thats practically Batallion strenght. This sure as hell is occupation.

Why not 'militarize' the police or bring in the national guard? Why can't the stupid democrats and the mayor in this town recognize the out of control homicide rate as domestic terrorism? There is mainly one demographic doing the murdering by the way. What's the matter Lucas? Are you afraid you might upset your demographics and lose the office?


If Lucas is that worried he must have something really big to hide. It's also simple, let your city get run over by criminals kneel in the streets to appease them and you are going to raise eyebrows.

Typical two-faced nonsense from Lucas.
For one group of people, he claims he didn't know anything about the feds being asked to come to town.
Then he shows up at a press conference to explain it to "the community".
And Mothers in Charge at the press conference instead of all the self-appointed black "leaders".
Did Gwen Grant and the revs have scheduling problems?
Hope the feds clean house and report how many with warrants were arrested, how many felons in possession of guns were arrested, and how many bangers and thugs will be charged in FEDERAL court.
Too bad it takes people from out of town to do the jobs so many elected and appointed officials have been too cowardly to undertake themselves.

I think it's an excellent idea. For one, the airlines can start flying and bill the government. After that the government can tax the jet fuel used for the planes.
Then there's always added bonus of getting the bad guys.

USA is paying the price for electing a bunch of faget ass liberal Mayors with special agendas. Time to crack down with some law and order, stop and frisk all the expired temp tags. Make America great again! Takisha is Superfan Dave's house mammy.

Good moves by Lucas. He might be the first Mayor since the 70's to take a real bite out of street crime. He just did a Mahomes by playing both ends against the violent criminals. Eyes on the prize.

Here's the play: BLM protests, Lucas concedes but asks for help with crime. The Feds smell political opportunity and react with a massive airlift of LE resources.

Lucas might not have planned it, but he threw the ball and it went long.

Round em up! One little two little three little gangbangers....

More officers and more feds doesn't equate to lower crime. Just more officers to respond to crime scenes and maybe do some investigative work. The gangs in KC do not care about the police and more pressure will just mean more armed confrontations and more officers in ICU at Truman Medical Center.

If you guys would just ask questions, the majority of criminal cases filed in Jackson County are drug charges. Very few new cases have anything to do with violent crime. The Police are not catching bad guys and the Prosecutor is not prosecuting. The Feds changed nothing because they have already been here as part of task forces.

Please crawl back under your rocks. Most of you don't live in Kansas City proper anyway.

4:05 PM No he didn't. Better get back to your fantasy football.

KC must be enjoying the uptick in occupied hotel rooms with this. Loews must be a happening place.

Donut shops are loving this.