So, the Mayor and his team just proved how much they don't know about the laws that govern the Internets today . . .

Actually, this applies to all public servants and it's actually an admirable cover story . . .

Click to see a copy of preliminary ordinance language that'll be rewritten . . . 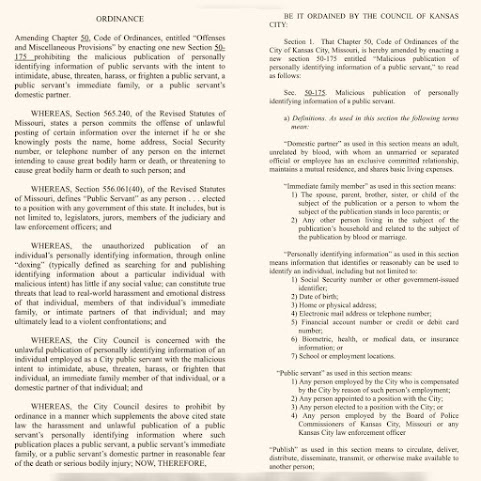 Here's what the Mayor and his noob lawyer friends forgot . . . U.S. law:

Section 230 of the Communications Decency Act

"Section 230 says that "No provider or user of an interactive computer service shall be treated as the publisher or speaker of any information provided by another information content provider" (47 U.S.C. § 230). In other words, online intermediaries that host or republish speech are protected against a range of laws that might otherwise be used to hold them legally responsible for what others say and do. The protected intermediaries include not only regular Internet Service Providers (ISPs), but also a range of "interactive computer service providers," including basically any online service that publishes third-party content. Though there are important exceptions for certain criminal and intellectual property-based claims, CDA 230 creates a broad protection that has allowed innovation and free speech online to flourish. "

TKC can always turn comments off or set stricter moderation . . . That's NO FUN and probably infringes on free speech but it's always a possibility. There are few forums in KC that keep their comments open and then sweep up the most nasty stuff later.

Truth is . . . TKC has always worked to eliminate "doxxing" because it's lame, risky and doesn't make me laugh. When we notice anything close to this scumbag practice we delete immediately or by request if we miss it among the thousands of comments that come in every day.

But let's not underestimate the power of desperate politicos who could use this law nefariously.

We once posted about a campaign party with a PUBLIC invite . . . The party was at the house of a politico and she CLAIMED that we were trying to "doxx" her despite her party plans she posted across the Internets.

Another crybaby consultant stupidly posted his personal phone number on campaign material and then blamed TKC readers for "harassment" after we posted the mailer that he already sent out to THOUSANDS of people.

And so . . . The word "doxxing" is more of a pop culture term than a legal description.

Better headline for you bud.

The Mayor is a Marxist.

The knee jerk reaction of every leftist when confronted with criticism is to attempt to silence their critics. The boy blunder is no different not or better.

Next election, anybody but Quinton Lucas.

With all the briliance---and racism and racist comments--that come out of here??

I guess we'd go to a blog where there are no comments allowed because the semi-literate author is unable to debate actual points? Then we could all sit around the campfire of Orange Man Bad with you!

Liberal snowflakes don't like anyone to disagree with them or criticism of any kind. We're all supposed to march lockstep with their extreme left-wing ideology or we'll be blacklisted, banned, boycotted and shunned. All liberals may now retreat to their safe space.

Thin skin Q Ball? I'd tell you to grow a set but we all know that's not possible. Besides, you like your balls across the nose.

Shut it down! You should not allow anonymous comments! Take some responsibility for your blog!

What Lucas is hating is seeing the truth of how people feel about him. He's a loser we know it and we point it out. He's the Mayor and when he fucks up it's news baby rather he likes it or not.

Hey Bandit, how's your empty afternoon going? Still here? Been here since 6:00Am! Your life can be a cautionary tale of what not to do when you get old! Hey kids...look at this loser at 12:03PM, he does NOTHING all day but be a racist on a blog. I mean nothing else! It's a beautiful day outside but this geezer goon wouldn't know about that. Only 12 mores to go loser and you will have killed another empty day!

This is easy to get around, just claim you are Democrat or Marxist and then nothing will happen to you.

Cuck Rage just got knocked the fuck out!

Lucas has gone too far. He is now insane.

Q is just pissed because someone called him a fairy.
His skin is way too thin for politics.

This guy is a complete loser. What a wimp. He’s made the National news because murder rate, per capita is up there with other liberal run cities. He is incompetent and can’t face the truth. Looks like he is getting lambasted on other social media as well. People on Linked In goer after him, hard, yesterday. His vaginal area must be hurting him.

If you own a home or a car in Jackson or Clay county your address is on the county's property tax web site. Along with your automobile info and assessed value of your house. Unless you put your info under some business name everything is already public record.

^^So? Why don't you do something productive instead of this Boomer?

1:21 is correct I hadn't paid any attention but QL is getting beat to shit on his LinkedIn page. I think it's great myself because so many on this site say the posters are all haters living in trailers well go read QL page at LinkedIN and the same things being said about him over there.

I mean it folks, he is getting hammered.

Mayor Lucas you talk the talk but don’t walk the walk. If you had a plan and took action then the Fed’s would not have to get involved. You promote violence through your actions in protest and through efforts to defund the police. You are encouraging violence and lawlessness through those actions. Oh by the way this is an election year so you prefer creating as much distraction and inaction as possible. You get what you ask for...Fed’s are coming. Should have focused on your job as a representative of the public you are suppose to serve. You should be ashamed of your lack of leadership and developing a plan. Stop talking and start doing.

Lucas wants to censor us for his failures.

12:34: And if it weren't for Tony, losers like Bandit would have no life. TKC keeps them out of polite society. Let's not risk having to deal with these people in person!

There are plenty of ways to get addresses online. You can even be followed home. Not sure why anyone needs to share info online when its already there for someone to find. Including roasters of every police agency in Missouri.

I hope Tony shuts the comments down. There's never anything productive or remotely interesting here.

^^Yes! Exactly! Now you get it dummy! See you're not that retarded.

TOP PHOTO -- THE LAW "PROFESSOR" WHO WAS A LOWLY LECTURER

Yada, yada, yada, Mayor "Soundbite" Quagmire sure does a lot of talking to the media, without actually completing any meaningful actions!!!

"TOP PHOTO -- THE LAW "PROFESSOR" WHO WAS A LOWLY LECTURER"

Posted by THE LOSER WHO COULDN'T GET HIRED AS A STREET PREACHER.

how is operation legend going?

So Lucas is trying to remove my first amendment rights?

Who does he think he is, some law professor or something!

Funny how Q Ball is now concerned about the safety of KCPD officers. He doesn't give a shit and he's fooling nobody.

I am sure you are in favor of reeducation training, indoctrination etc?

He tries to control the City, State and President. Why the hell would his bigger than Texas ego stop at the Internet?