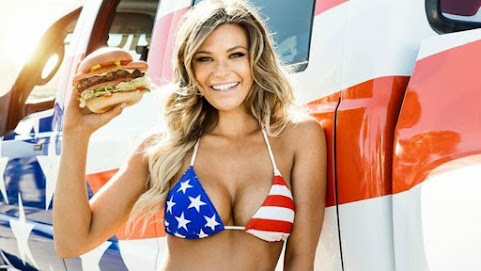 Not so long ago, Carl's Jr. stopped using bikini babes in their ads for all the wrong reasons . . . Yet on this 4th of July we celebrate the tradition of American cheesecake and commerce as we check pop culture news links along with community news and national headlines.

Shakell Avery was the region's first COVID-19 patient treated with the convalescent blood plasma transfusion.Tuesday evening, he returned to Menorah Medical Center to thank health care workers for saving his life."Thank you all," Avery said.The local barber fought COVID-19 for 76 days at Menorah."The first thing that went to my mind was that I was not going to make it," Avery said.


What are the chances of getting COVID-19? Interactive map shows risk level by county

CAMBRIDGE, Mass. - A new interactive map and data analysis released this week by Harvard University seeks to help the public and policymakers understand what threat or risk their communities face from the new strain of coronavirus that causes the disease Covid-19, the Kansas City Business Journal reported.

The officer critically shot in the head in Kansas City continues to respond to stimulus and is able to move his arms and legs on both sides.The family of the officer asks for continual prayers. Their loved one remains in very critical condition, but there are positive signs."We're hearing that our member is at least alert, can say a couple words at this point.


White House hosts a party in the midst of a pandemic

The White House was always one of the busiest social hubs in Washington, accustomed to hosting at least three to five events per day, ranging from meetings with dignitaries and VIPs to smaller luncheons or private dinners. That is, until Covid-19.

President Trump delivered a speech at the White House South Lawn ahead of his July Fourth celebration He once again blasted the 'radical left' and the 'angry mob' he claims are trying to 'erase' American history Trump compared defeating them to America's history of taking on 'Nazis', 'fascists', and 'communists' President Donald Trump continued his crusade against protesters targeting statues and national monuments, in a fiery Fourth of July speech comparing the 'radical left' to Nazis and terrorists.


Antonin Scalia, Jackie Robinson among those picked for Trump's 'National Garden' of heroes

President Trump on Friday announced the creation of a National Garden of American heroes to pay tribute to historically significant Americans -- a garden that will include former Supreme Court Justice Antonin Scalia and baseball star Jackie Robinson among past presidents, anti-slavery advocates and others.

Shannon LaNier, a sixth great-grandson of Founding Father Thomas Jefferson and his slave, Sally Hemings, wore the same sort of outfit as his famous ancestor for a Smithsonian Magazine piece, "American Descendants." But LaNier, who is Black, said in the article in the magazine's July issue that he chose not to wear a wig.

Colin Kaepernick could be the perfect backup quarterback for the Kansas City Chiefs. Don't let that sentence scare you. It actually makes a lot of sense from a football perspective in regard to how the Chiefs' roster is currently constructed and who is coaching the team.

There's an updated F-150 full-size pickup on the way for 2021. It promises to be the most technically advanced and connected truck on the road. The 2021 Ford F-150 was revealed during an online presentation due to the continuing coronavirus ...

KANSAS CITY, Mo. - Kansas City is on pace to break records with nearly 100 homicides so far this year. Many community activists have called for more mentors to help the city's young population and deter them from the life of crime. One of those mentoring programs is High Aspirations.

Proving once again that Trump is ignorant of history but expert at false equivalencies.

In any Marxist cultural revolution, a nation's history and icon are targeted for destruction. Trump should have called them what they are, bolshevik terrorists.

^^^^In spite of throwing in a few big words, your dementia is still coming through loud and clear, making you perfect Trump material.

Jane Yanofsky is so very hot, even still, she gets me going!