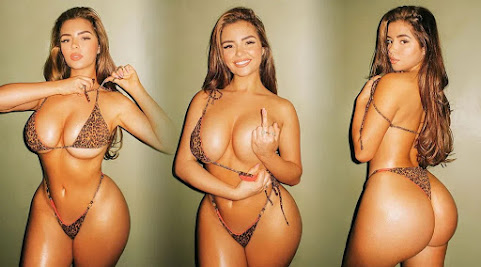 Right now we've celebrating the fashion sensibilities of hottie Demi and checking pop culture, community news headlines along with headlines from across the nation.

It's hard to miss the massive dinosaur outside Union Station sporting a COVID-19 mask.But it's what's unfolding inside that has people talking. Welcome to the Dinosaur Road Trip exhibit. This experience will take you to more than a dozen popular vacation destinations in the U.S. There's obviously a big twist.


Local agencies stepping up to support KCPD after officers are wounded

KANSAS CITY, MO (KCTV) - On Thursday, two separate shootings in Kansas City left two police officers injured after being shot. Now, other agencies are stepping up to support their brothers and sisters in blue during this time.

She suffered the loss of her father Barrie Mawby at the end of 2018, with tragedy striking again soon after when her mother Christine passed away in June 2019. And Demi Rose paid an emotional visit to her late parents' house on Wednesday where she took a trip down memory lane with a look back at old cards and childhood photos.


Can Republicans handle the aftermath of Donald Trump?

In the wake of the Iraq War, Hurricane Katrina, and the financial crisis, President Bush was historically unpopular. American troops were coming home in body bags from a war with no end in sight and no way to measure victory.

Researchers at the Henry Ford Health System in Southeast Michigan have found that early administration of the drug hydroxychloroquine makes hospitalized patients substantially less likely to die -- a finding that conservatives say validates President Trump's early statements on the drug, even as various media outlets mocked him for suggesting the treatment might be effective.


Opinion | Mount Rushmore's land was stolen from my people. Trump's rubbing my nose in it.

On Friday, President Donald Trump will continue his tour of racism and colonialism, moving from Tulsa, Oklahoma, to the sacred Black Hills. Make no mistake, this visit is an attack on Indigenous people. I visit the Black Hills alongside many other Lakotas every year as part of a tradition we have maintained for thousands of years.

MOSCOW (Reuters) - President Vladimir Putin on Friday mocked the U.S. embassy in Moscow for flying a rainbow flag to celebrate LGBT rights, suggesting it reflected the sexual orientation of its staff. His comments followed a nationwide vote on constitutional reforms that included an amendment enshrining the definition of marriage specifically as a union between a man and a woman.

Federal authorities in New York on Wednesday seized a shipment of weaves and other beauty accessories suspected to be made out of human hair taken from people locked inside a Chinese internment camp. U.S. Customs and Border Protection officials told The Associated Press that 11.8 tons of hair products worth an estimated $800,000 were in the shipment.


Arrowheadlines: The Chiefs need to be wary of overconfidence

KANSAS CITY, Mo. - Frank Clark is paying for the funeral of LeGend Taliferro, the 4 year-old boy who was shot and killed Monday morning while sleeping. Life Line Financial Group told 41 Action News the Kansas City Chiefs defensive end had been in contact with Taliferro's mother, Charron Powell, about helping cover the costs.

LAWRENCEBURG -- WARRENSBURG, 91. FORECAST HAS SPOTTY SHOWERS. I THINK WE WILL CLEAR IT ON TONIGHT AND EVENTUALLY IT WILL BE DRY TOMORROW BEFORE ANOTHER CHANCE ROLES IN FOR THE AFTERNOON HOURS. 70-88. ONLY A SMALL PART OF THE REGION WILL BE GETTING WET. Spotty showers are possible Friday evening.

Wow!
T-shirts and posters campaigning for a murder-free weekend.
Two whole days with a third if you throw in the Fourth of July!
Without a single senseless homicide.
Can the bar in these communities get any lower?

Back to the Sixties with the GOP crying in the wilderness while the Country gets back on track and starts growing again!

Thankee, Bonespurs, don't let the door hit your oversized ass on the way out!

Frank Clark is a man to look up to covering the costs of the four-year old boy's funeral. At least that will help the family financially.

Regarding 7:26 comment: Are you talking about the Democrat Lyndon Baines Johnson 1960's? Hey, hey LBJ how many kids did you kill today? Good times for the Democrats; their convention had a anti-war riot.

The 1960's led to the next 20 of 24 years of a Republican President with Nixon, Reagan and George H. Bush. Jimmy Carter was the only Democrat exception and served a disastrous four year term from 1976 to 1980 of 18% interest rates and inflation.

You Marxists throw out stuff that you have no idea what the true facts are.

New York City is on what was once Native American land. Time to give it back, Mayor DeBlobio.

^^^You'll miss Trump when he's gone and calling people names is no longer in fashion. Enjoy it while you still can.

And still Faglers believe Socialism is the answer to the Rights of Homosexuals and living in America. LOL. Weird