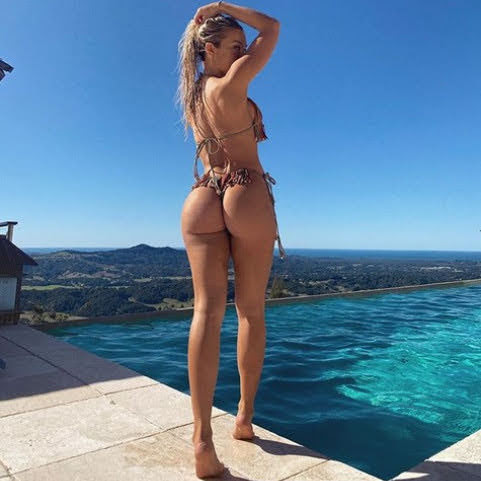 Right now fitness hottie Tammy and her impressive body of work inspire us to take a peek at community news, pop culture and some of the more important headlines for today's news cycle . . . Checkit:

KANSAS CITY, Mo. - As the United States continues to confront racism, it's also grappling with another type of hate: anti-Semitism. In the Kansas City metro, it's of grave concern to Jewish leaders. "Locally I speak a lot with students, high school, and college.

One simple way to support the Black community is to put your money where your mouth is. A lot of restaurants, especially Black-owned establishments, have struggled during the COVID-19 pandemic. Supporters of Midwest Black Restaurant Week, running July 24 through Aug. 2, are dedicated to promoting these restaurants and helping them recover.

KANSAS CITY, Mo. - The Kansas City, Missouri, police officer who was shot in the head earlier this month was discharged from the hospital on Thursday morning and will continue his treatment out of state. A spokesman for the police department said the officer, whose name has not been released at the request of his family, was released from Truman Medical Center around 11:30 a.m.

(CNN) -- Get ready because you have another drive-in concert to add to your calendars. Country superstar Blake Shelton announced on Wednesday that he has a drive-in concert debuting July 25 at over 300 locations across the country. You can purchase tickets to his performance at the B&B Twin Drive-In in Independence here.


Tammy Hembrow insists her famous derriere is 'built not bought'

Tammy Hembrow is one of Australia's most followed personalities on Instagram. And on Friday, the 26-year-old fitness influencer did what she does best by flaunting her famous curves for her millions of fans. She posed in a pair of brown figure-hugging leggings that accentuated her derriere.

Big Apple radio host Charlamagne Tha God slammed Joe Biden for calling President Trump the country's first racist to be elected to the White House, according to a report. The presumptive Democratic nominee made the comment during a virtual town hall Wednesday in response to concerns voiced by a health care worker about the president referring to the coronavirus pandemic as the "China virus."

WASHINGTON - Rep. Alexandria Ocasio-Cortez, D-N.Y., took to the House floor Thursday morning to deliver a candid rebuke of sexism in Congress and beyond in response to comments from Rep. Ted Yoho, R-Fla., who had reportedly called her a vulgar insult.


China orders closure of US consulate in Chengdu

China has ordered the closure of the US consulate in the south-western city of Chengdu, the latest in a tit-for-tat escalation between the two countries. The move comes days after the US ordered China to close its consulate in Houston, a move that Beijing described as "political provocation".

Several on board were injured after Iranian pilots executed a rapid descent. An American F-15 fighter jet came within 1,000 meters of an Iranian civilian airliner flying over southern Syria on Thursday, to carry out a visual identification of the aircraft, the U.S. military confirmed.

WASHINGTON - President Donald Trump on Friday presented one of the nation's highest civilian honors to Jim Ryun, a former Republican congressman and the first U.S. high schooler to break the 4-minute barrier in running the mile. Ryun, a University of Kansas alumnus, was the 1968 Olympic silver medalist in the 1,500-meter run and is [...]

The Royals announced their 30-man Opening Day roster on Thursday for what will be a 60-game season starting Friday.

Hide Transcript Show Transcript TALENT. THAT'S AWESOME. FIRST ALERT RADAR THIS MORNING IS CLEAR. CAPITAL FEDERAL CITY VIEW CAM THIS MORNING ALSO CLEAR, BUT IT LOOKS HUMID, DOESN'T IT? 75 DEGREES RIGHT NOW. WHEN WE KIND OF MARRY THE TEMPERATURE WITHIN THE HUMIDITY, YOU'RE GOING TO GET A HEAT INDEX VALUE FOR A FEW HOURS THIS AFTERNOON AROUND 100 OT 102 DEGREES.


If Kansas City's black communities want to unite to educate against hate they need to start with their selves. They are using racism to fight racism. I really don't think this will ever be better after what black people have done to the country, it's gone way too far and the hatred is more intense now than it was years ago. Most of the black people crying racism and hatred are very prosperous and have had a good life in this country. People are bitter over this and don't expect it to be fixed.

^^only 6 mins between post and response!!! God how lonely and desperate you must be! I can't imaging refreshing this post to see if anybody has responded to you. You ARE the biggest loser on the blog! Pathetic. Lonely hearts club band leader.

He sure is one leg humping little pussy ain't he? LOL!


now jews, by far the wealthiest people in the world, hopping aboard the black "Victimhood Express" scam train?

Hey leg humper! You missed me over here LOL! https://www.tonyskansascity.com/2020/07/activists-strip-kcpd-of-riot-gear.html

Let's count how many absentee Jewish slumlords there are in the poor black neighborhoods.

Your swastika is crooked 1:01

Wow! Bandit's not an anti-Semite. Whodathunkit?

I'm Jewish? Man is my Rev gonna be surprised LMAO!

It never ceases to amaze me how you "tolerant" liberals are always the first one out of the gate to shout RACIST and are always the racist ones every single time. Nice try but his swastika is still crooked BTW

1:01 lets count how many lazy no good rats there are in black neighborhoods mooching off the system?

2:04 got quiet. Must have found a job and can't talk with his mouth full LOL!

ryun is a great ksnsan.

Antisemitism -- Any reality-based assessment of Jewish behavior. Jews created communism and usury. Jews dominate banking, media, and pornography. Jews gave atomic bomb secrets to the Soviet Union. If we subtract every Jew from radical leftist politics, almost no one is left. Jews created the Victim Industry (see Holocau$t) and control debate by screeching "antisemitism" every time anyone so much as disagrees with them. Jews have been banished from 109 different countries, but it's "antisemitic" to suggest that even once it was their fault. Fuck 'em.

WSLVM, is that you Nancy Pelosi? Pretty sure that you aren't Joe Biden. That rant was complete sentences LOL!

Hey Bandit--My saying you're not an anti-Semite was a compliment, and you certainly don't have to be Jewish to oppose antisemitism. I'm glad to know there's one group out there you're not against.

And 3:27: The Thousand Year Reich called. They want you back.

All these organizations trying to establish some credibility constantly are "reaching out" to other identifiable groups simply to increase their claimed membership and support.
It never works out very well for very long.
BLM, which was started by a lesbian and her transgender husband, is already suffering the usual infighting over money, power, and celebrity.
After the Women's March in 2017, the group instantly fragmented into fights among Jewish, black, and white women over who would run the show.
The "everybody is a victim of something" routine can get you only so far.
And this black/Jewish/Latino proposal has nothing at all in common to hold it together.

Bubba Starling is more overrated than Clint Hurdle was.

@4:48 Understood. My apologies for the friendly fire sir.

Bandit, shhhh - don't tell her where it went - not cool Dude!

Jim Ryun is ultimate classy athlete. The Royals of 2020, not so much.