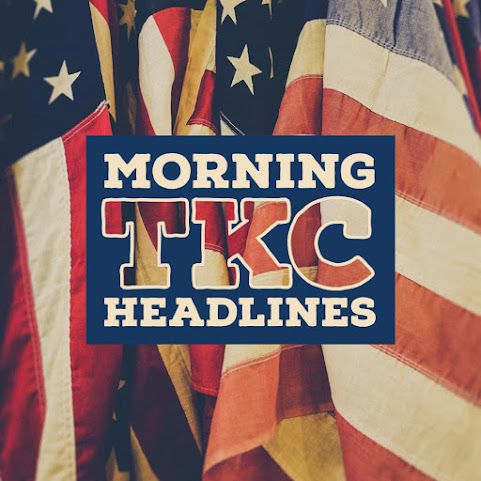 A quick glance at some of the noteworthy headlines we're checking to start the day . . . Take a look:

Heading into an Independence Day weekend unlike any in recent memory, there are a range of in-person and online events scheduled for anyone looking to celebrate despite the pandemic. Earlier this week, Comeback KC offered advice for celebrating the holiday safely.

KANSAS CITY, Mo. - Playing with or lighting fireworks after using hand sanitizer could lead to injury, according to one Kansas City area health expert.

Old Shawnee Pizza is mixing it up the kitchen as it collaborates with Zarda BBQ for the Zarda BBQ pizza."Two legendary Kansas restaurants come together to produce one of the best barbecue pizzas ever known to man," Old Shawnee Pizza said in a Facebook post.The barbecue specialty pizza will be offered all this month.

KANSAS CITY, Mo. - Charlie Hustle, known for its "KC Heart" line of clothing, knew it had to adjust on the fly when the COVID-19 pandemic began. "We sat in a room with our leadership team in March and threw ideas at the board.

Rich Lowry, the editor of the conservative National Review and author of "The Case for Nationalism," said in an interview that "No one can dismiss this and say it's completely implausible." "There is at the very least a significant faction within the Republican Party that [Carlson] has a huge stake in and arguably leadership over," Lowry, who writes a column for POLITICO, said.

White woman arrested for pulling gun on black woman, daughter in Michigan parking lotA Michigan man and his wife, the white woman who pulled a gun on a black mother and her 15-year-old daughter in a Chitpotle parking lot, were arrested Thursday for the caught-on-camera confrontation.

Billionaire Peter Thiel, the most famous Trump supporter in tech, is distancing himself from the president's reelection campaign. Thiel fears President Donald Trump will lose the race, according to a report from The Wall Street Journal, due to economic effects of the COVID-19 pandemic.

The Hong Kong government said the rallying cry "Liberate Hong Kong! Revolution of our time!" was now illegal under the legislation barring secession, terrorism, subversion of state power and collusion with foreign forces

A Missouri group is pushing on U.S. leaders to pass a $50 billion relief package for day cares. The money would come in the form of grants, so another group is helping day cares learn the ins and outs of grant applications.

Get 'Em Home Clinic promotional photo. // Courtesy KC Pet Project 4th of July weekend can be tough on dogs. The fireworks are often a major issue for their stress levels, and the recent pandemic has also resulted in area pets being unable to make regular vet visits for numerous extended medical issues.

After a report that a naming-rights deal for their stadium was imminent, the Chiefs walk it back — at least for 2020.

Hide Transcript Show Transcript 86 BY 8:00. 10:00, 80 DEGREES. FIRST ALERT FORECAST FOR FRIDAY MORNING, I STRAIGHT SHOWER CANNOT BE RULED OUT. PARTLY SUNNY OTHERWISE, WARM, 73. THE WINDS NOT T STRONG. THEY PICK UP IN THE AFTERNOON HOURS. TOWARD 9:00, 78 DEGREES. HERE COME THE HEAT INDEX READINGS.

God Bless America! It was fun while it lasted.

White lady was protecting her property shouldn't have been arrested. See that's what black people do, they escalate the issue to promote a reaction. That's called entrapment if a law enforcement officer does it. It's also the favorite game of protesters.

TKC should be ashamed linking an article that has only a snippet of the total encounter - almost 3 minutes of video not 40 seconds.

The black "ladies" were harassing and threatened the white couple with physical violence, blocked them from leaving, and hitting their van. The white couple were trying to leave peaceably but could not.

Listen to the black lady - I never heard someone so happy to have a gun pulled on them - such glee.

Blacks are emboldened to create these fake "racial" incidents - get the ghetto lottery with go fund me for the "trauma and healing" the endure.

^^^^ TKC ain't ashamed, he don't give a shizz about your culture war. It's for us to poop on. That's why I like this blog. Fudge on Karen and her little spat with Kesiheka. They should've settled it like real women, with bikini mud wrestling.

The underlying reasons for the existence of BLM:

1. Many folks want what you have (worked for), without without having to work themselves. Reparations is a perfect example. A lot of folks make a lot of money with these protests.

2. Supported by various anti-American interests to elicit votes from the black community, SO THEY MAY RETAIN POWER, by making promises they have no intention of keeping, just like they never have in the past.

And, those interests will make every effort to preserve those conditions that anger and divide people, in order to come back year after year for those (democrat) votes.

I saw the entirety as well as I can not believe they were arrested. I pray this plague hasn't infiltrated the courts as well as they had every right to defend themselves after the shit that lady pulled and the number of times the couple tried to leave the situation.

The monkeys are going to eventually provoke the wrong motherfuckers. They always do.

Funny words from a bunch of gullible fools who were screaming praise at the two pieces of shit in St. Louis yesterday!
Now that it's turned out that these two asswipes have been feuding with everyone in their "Gated Community" since the blonde bimbo was kicked off the HOA Board, you've been left looking like the idiots you are!

Hint for the Prosecutor investigating their actions - look up "Brandishing" in the State Statutes. You can certainly hold a gun on your own Property, but pointing it is a different matter.

Its fucked up now because was fucked up in do many ways from day one.

It was definitely a setup by the blacks. Have you ever seen how they start fights at bars?

AA: Hey n***a you just bumped into me.
WB: No I didn't [walks away]
AA: Hey, f**k you mothaf***er git yo ass over here [walking towards WB]
WB: Dude I don't want any part of this [continues walking away]
AA: starts the fight with friends hooting and hollering and throwing punches at random

Guarantee that's the gist of what happened here too.

No property was threatened you racist moron. Bitch just decided to be a terrorist.

1003 are some kind of idiot...whose talking about property damage...the "ladies" threatened to beat the nice couple up and would not let them leave.

905 is an idiot...so if you have been kicked off your local HOA you can't defend your self?

Watch the full video of the Chipotle gun incident. The lady who pulled the gun appears to be pregnant and protecting her belly when Hill is blocking her from getting to her car.

The biggest taxpayer scam is the NFL and Kansas City Chiefs. Clark Hunt's family who lives in Dallas has receved $ Billions in taxpayer funds over the last 50 years.

The NFL is playing both poor blacks, hispanics, asians and whites and walking away with $ billions.

Karen packing heat... article said she was only 32 and looks like an old hag. Yuck! White woman dont age well at all. Gah-ross!

Thing is these blacks can do this shit with impunity because they usually do not have a job.

The husband was fired for some insane reason.

There is no danger of losing their EBT, HUD housing, free healthcare, Obama phones, whereas the tax paying whites always lose their employment, going to prison is a family reunion.

1108 - don't forget about all the money wasted on 18th n vine, community centers and daycare for the ungrateful welfare dependents and housing their fathers in jail.