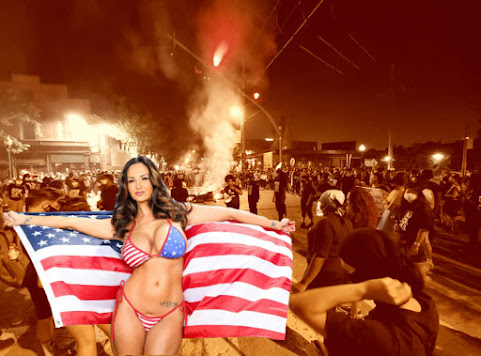 A postscript for the holiday weekend promoted by the "alternative" Kansas City magazine that has been dedicated to mostly publishing progressive talking points.

"On this 4th of July, several hundred Kansas City residents rallied and peacefully marched the streets to protest police brutality and racial injustice. It was not the picnics, marching bands, and fireworks of the past. There was no laughter and no sense of nostalgia for the past. There was anger and determination for change. But in many ways, it seemed more in keeping with the spirit of the “rabble-rousers” who first signed the Declaration of Independence than were the holiday cookouts of our youth.

"It was a truly American 4th of July."

A rebuttal on the designation of "peaceful" protest:

"According to Kansas City police, protesters burned several flags and a small wagon with hay bales in front of Kelly’s Westport Inn. The doors to the bar were smashed and a citizen’s vehicle was also damaged."

none of that looks any fun at all.

And it don't make me laugh.

A small minority of traitors getting all the attention. Rembemer what happens EVERY time Communists get control.

Westport survived a lot worse but it's a shame that these guys wanted to ruin eveyone's party.

Once Kelly's is forced to shut down the mob will find a new Racist thing that must be shut down. If they could dig 170 years back for racism to close Kelly's they can do it to basically anything.

If I was a secret agent, who had snuck into control of the BLM protests, with the aim of destroying their movement from within, and discrediting their cause in the wider public, I would give up, because my job is basically redundant at this point.

While the Pitch and a hundred protesters continued their miserable lives of bitching, hate speech and protesting; the other 2 million in the metro area enjoyed family, barbecue and shooting fireworks to celebrate our country's Independence Day.

Everyone in our neighborhood was shooting fireworks and having fun.

Being a Marxist Democrat appears to be totally UN-fun as they see the negative in everything of life.


Racial injustice?? You mean like the very racist black Tuesday that's getting ready to come up?

While the radical democrat commies were out RIOTING I was celebrating my freedom and having a picnic watching amazing fireworks.

Oh and did anyone mention it was a black guy who ran down the two white women in Seattle killing one?? I guess the white BLM supporters kinda have it backwards now. These morons don't even know what they are supporting.

How about spreading the wealth around?
Is it fair that the Plaza and Westport get all the attention? Can you guys protest 18th and Vine or Bannister next?

O'er the land of the free and the home of the brave!!!

Yes.
These "activists", "protestors", and "rioters" are just like the founding fathers.
In their own fantasyland and deluded minds.
They have no really positive agenda and haven't made even the slightest effort to learn enough about issues that they can make anything resembling a serious recommendation.
What was left in the founders' chamber pots had a higher IQ than this mob.

They would have called out the militia to deal with black protestors.

We need to stop lying to ourselves about our own history.

Blieron gives us American history according to the Marxist dialectic. He completely ignores Hobbes and Locke, the Magna Carta, and the Enlightenment thinking that led to the evolution in political thought that led to the American experiment in liberty and representative government. Oh wait, he skipped civics classes when he was growing up. He was too busy smoking pot with the other dropouts.

I don't mind protest. Breaking shit at my favorite bar is something different altogether.

This is why Trump might actually win. Not with my vote but this sends a bad message.

Actually, this is why Bernie lost.

Byron, you need to move to Communist China.

So where are we burning down after Kelly’s? Maybe the State Capital building for legalizing slavery? I know some mansions in town with slave quarters in back. Let’s destroy those monuments of black oppression.

WTF is that idiot Byron talking about?

There is no evidence of racial bias of any kind in police shootings.

^^^and yet not one word you said is true.

The Communists were burning the Town. AND THE HAPPY PEOPLE ONE MILLION STRONG AT THE LAKE OF THE OZARKS. Why do you think people leave the Metro on the Weakened. You have angry people at these protest .IT attracts people with mental problem's. And