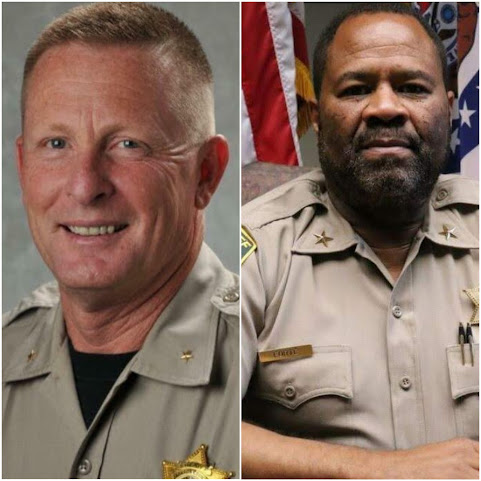 This doesn't come as a surprise to courthouse insiders but public political disputes involving law enforcement are extremely rare.

Let's not forget that the Sheriff Forté has consistently highlighted a legacy of corruption within the department and questions longstanding tactics.

Recently, the incumbent Sheriff also exposed his experience with racism from subordinates:

“Some of the things going on with the sheriffs office is because I’m a black male telling telling them what to do and they’re not accustom to it,” Sheriff Forté said.

The public disagreements within the department are new to local newswatchers given the overall law enforcement silence leading up to the "interesting" circumstances which precipitated former Sheriff Sharp's resignation.

Nevertheless, the local law man working toward a comeback seems happy to have the support from former employees in a recent post . . .

"A good leader collaborates, supports and respects their team. The respect demonstrated by a leader to those surrounding them is the respect they receive in return. Leadership means working through tough situations, having tough conversations, and addressing though issues with the end goal always being resolution. In today's climate, having tough conversations and collaborating to build the trust of the community and show the humanity of policing is not only important, it's imperative.

"I'm honored to have the support of the hard working men and women of the Jackson County Deputies Association - Chapter #3 FOP Lodge 50. During my nine years as Jackson County Sheriff we did just what I mentioned above - we worked together, we collaborated, we had tough conversations, we addressed tough issues and at the end of the day solutions were made and respect was given. I look forward to continuing this relationship and supporting the deputies of Jackson County when I am re-elected!" 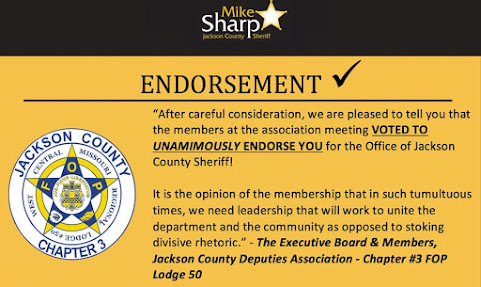 And so, Jackson County Deputies standing up for their former boss despite recent controversy demonstrates the intense level of emotion and debate underlying this primary contest which continues to escalate as the vote moves closer.

You've mentioned this in other posts T, but I think it should be included here.

This is the public's first chance to vote on not only frank white's team but also Forte's alliance with Blm.

If he wins, that gives us a really good glimpse at where Jackson County stands related to social justice, if not. Then we're in for a surprising election season.

The union endorsement also turns a lot of voters away. Overall endorsements are a lot less important than in days past. This one might not impact Forte as much as Sharp thinks.

And if Sharp wins do we get his alliance with Three Ways Are Us?

Forte wins but it'll be closer than he thinks.

^^^ Likely, but MAGA has never been known for their down ballot strength.

They're endorsing their crony, a corrupt former sheriff who gave his girlfriend numerous raises and promotions!

Forte talking about law enforcement registering is a complete joke. Forte hired Randy Poletis even though Poletis was fired by KCPD. Poletis was violating the residency policy and was part owner of a bar, violation of state statute.

Forte has spent years talking about issues of race inside his departments but actually never produced any cases against police officers. He’s a fraud and a liar. He stole 500,000 in manufactured overtime and has been completely non existent as the sherif.

Sharp is not an improvement over Forte. The both suck. Next?

John Bullard was an FOP candidate with tons of endorsements from Unions and the FOP. He still lost the race to Sharp 8 years ago. Endorsements don’t mean anything: just look at the Stars past endorsements .

11:08 the Union brings in a lot more votes than not, kc fire dept is a perfect example. If you think otherwise you’d be wrong.

Que the crybaby racist crap from forte any minute now.

I had sex with forte so he gets my vote!

The FOP endorsement would be the same as an endorsement from the KKK. Forte told the FOP he didn’t want their endorsement and didn’t interview for the endorsement so their choice means nothing.

Anybody but Forte. I dont care what Sharp did. I am not voting for Forte. Kinda like Killery Clinton. I would have voted for Lucifer rather than vote for her. Same issue with Forte.

12:18 but he took the racist terrorist group blm support now didn’t he?

Why don’t you prove the kkk is behind all this instead of relying on the same worthless tactics and lies by blaming everything that doesn’t go your way on the kkk or racism in general. C’mon pussy, prove it bitch.

As a non-JaxCo resident I have seen Forte in the news a lot. He was always riding his Harley to crime scenes in KCMO so he could charge OT hours and reap big money from the budget. Then he moved to the Sheriff's office and he has on several occasions played the race card like we should feel sorry for him but he never accomplishes anything. He got support from a black mayor in KCMO (S'liar) and a county exec (White) and he thinks he is the entitled one. I have never seen him put together any plan or program that has had a positive impact on either of the past two law enforcement leadership positions he has held. I hope Sharp wins, JaxCo needs a win.

^^^ According to forte he came up with a great idea a few weeks ago in a televised news conference saying he would create a data base of bad cops so nobody would hire them if they got fired for doing bad things while a police officer, the problem is it already exists and has for more than twenty years.

Why do dimwits always think people are too stupid to know when they are lying?

I’m pretty sure fortes family sold slaves back in the day.

Sharp should be in jail for his inappropriate relationship with his employee, and for compensating her above market rate. Essentially, tax payers were paying the salary of his side piece. That is factual betrayal of public trust, i have to believe laws were broken, not to mention the legal exposure for a private suit/settlement. Private sector couldnt do this, why dont taxpayers expect more from their elected leaders? Anyone that votes for Sharp has their head in the sand. The balls of this guy to even run for reelection! Unbelievable!!

Another race to the bottom in Jackson County.
Whoever "wins" this fiasco, the residents and taxpayers lose big time.
White, the legislators, Peters-Baker, the whole menagerie is a clown car of the first order.
Sad.

Sharp is not anti gun, forte is plus forte hates white people and everybody knows that.

He is a racist loser that blm endorsed so....

Thanks to KC and St Louis the rest of the state votes Republican.

So what exactly do folks get for robbing them of 1% of their earnings?
This is so unfair to poor people.
Does KC hate the poor?
Hope Rex in St Louis can get some traction and unfund this.

Great plan to have Trump do what a Democratic can’t: Reel in crime.

When Forte became KCMO Police Chief, everyone hailed him as the black savior who would fix the murder rate. But he never produced anything and became a source of serious morale decline due to his utter incompetence. He was yet another case of a Black Mayor appointing a Black Chief and showing the public both are incompetent. If Forte wins not only KCMO goes into the toilet but Jackson County will follow right behind. Forte was humbug all along.

Wait a minute.....what is Phil Levota going to do when his buddy can no longer get him "unarrested" after 911 is called on him? My man Phil has to be able to keep skeezin.

Well, this is awkward.

“Some of the things going on with the sheriffs office is because I’m a black male telling telling them what to do and they’re not accustom to it,” Sheriff Forté said. Check out Darrylicous Smolleting!!! LOL Forte accusing anyone of being a racist is nothing more than a case of the pot calling the kettle black!

Forte does not hate white people; that is an outright lie. And who do you think BLM would support? A white, cheating pig like Sharp or a black man? Hell, they’d support Godzilla if he were black.

I agree!! He should be ashamed of himself!!