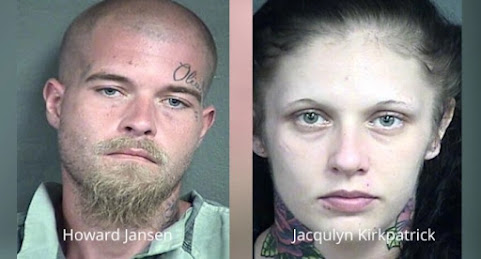 Whilst the death penalty is unlikely in Kansas . . . Here's look at family and community reaction following a tragedy . . .

KANSAS CITY, Kan. - A Wyandotte County father and his girlfriend are charged in the death of his 3-year-old daughter, Olivia Jansen. Howard Jansen III and Jacqulyn Kirkpatrick are charged with first-degree murder, endangering a child and desecration of a corpse. If found guilty, the pair could face life in prison with a chance or [...]

Outside of the Wyandotte County courthouse, Olivia Jansen's family made their wishes clear, with signs and chants calling for justice. Olivia's father, Howard Jansen, III, and his girlfriend, Jacqulyn Kirkpatrick, are charged with first-degree murder, endangering of a child and desecration of her corpse.

KANSAS CITY, Kan. - A Kansas City, Kansas woman is calling for change at the Kansas Department for Children and Families. Many in Kansas City are grieving the loss of a 3-year-old girl found dead on Friday. Saturday night a vigil was held for Olivia Jansen.


It takes a real sick person to do this kind of thing. These two need to be put to death.
She's safe in the arms of Jesus now.

Don’t give him the death penalty.

Do you people realize what they’d do to him in prison for killing a child?

He needs to suffer for ever.

If only the blacks could get the death penalty for killing a child, why is it different for them?

Wow the difference could not be starker....black and white, night v day.

Governor Kelly? Where are you on this matter? (crickets!)

Look what the fuck happens when you send out a fuck ton of social workers to help when a kid is in danger instead of the police. Let's not forget the ineptitude of people like Jean Peters Baker and her WyCo counterpart Mark DuPree who is more interested in showing off his gold rolex and rings than wearing a suit that fits or protecting little 3 year old girls.
https://www.wycokck.org/DA/Biography.aspx

Not clear on something - is the "girlfriend" the child's Mother?
If not, where's the Mother in all this?
I must have missed the disclosure of the answer to that question, which I ask because it's so unusual for a Father to have custody.

Rob, uh, what exactly are you expecting the Governor to do here? She's not a retard like Trump so she's not going to come up with some ridiculous executive order to protect children that essentially doesn't mean dick. She's going to be an adult and let the KS Judicial system handle it. Is that ok with you?

8:20 - What in the ever living fuck are you talking about? You dumb fucking rube. Do you know anyone who's ever worked in Social Services? They're paid shit and they're spread really fucking thin. You know why, because no one likes to spend money on that stuff. This kid fell through the cracks like so many do because the resources aren't there. So take your 'defund' bullshit argument and fuck right off. Yeah, let's put DCF responsibilities on police now in addition to the other stuff they have and see how that works out. GTFOH.

Nogs kill they babies all de time. So what????

The child's biological Mother is in prison.

This poor child never had a chance.

I believe the biological mother is in jail already

The deck was stacked against this kid. Two shit ass parents. Poor. The kind of person, say, about 10 or 11 years from now TKC posters would be bitching about their tax dollars that had to go to supporting her and her future children. But now, TKC posters lament a life lost.

Pulling yourself up by your bootstraps isn't so easy.

DCF spends roughly 2/3rds of all their investigative time chasing down complaints that are found to be false! Divorcing spouses file false claims, angry neighbors file false claims, even bankrupt siblings file false claims hoping to upsurp the other sibling that is a Power of Attorney for a wealthy parent, so they can get to the parent's cash and spend it on drugs and booze. One way to stop this is to prosecute people that file false claims! Send them to jail and fine them! But DCF wont even release the names of the most outrageous and far fetched claims filers! Like the ones that claim a caregiver is an alien and is pulling their older parent's gold teeth to collect the gold to build a space ship! DCF will hide and protect those flase filers names and so there is not enough time to follow up on real deadly complaints. The false filers are partly responsible for this little girl's death. The assisted in covering up the abuse by sucking time away from DCF investigators on made up fake claims. Even the police trying to file charges on false filers for malice can't get the names. False filers should be shot in the head!

^^^Riveting stuff tin foil hat wearing divorced Dad. I see you bro, that bitch of an ex wife taking alimony and child support and then trumping up some bullshit about you and your behavior around your children. Rail on brother!

In the real world, there's probably some legal ramifications that DCF is subject to in those cases, but carry on.

@ 836. here is what I expect Governor Laura Kelly to do. First of all since she campaigned for the office she has railed about how bad Gov. Brownback was on the budget. She has done nothing to improve it. She railed about DCF and how poorly it was run, she hasn't improved that. She railed against school funding and yup you guessed it, she didn't do anything to improve that either. I want her as the CEO of Kansas who has never stepped up and accepted her part in all of these failings to either shit of get off the pot. She will never say anything about this little girl until she can spin it as someone else is responsible for the problem. Granny needs to go and the sooner the better and that is what I expect.

Wow. You never see the parents of a murderer ever lobby for more stringent charges in a murder case. I admire these two for standing up for the grand-child that they were not allowed to see for months. I feel sorry for them having this level of sorrow in their lives and I pray for them to have strength for each other. God Bless these two.

To 8:40. Some facts for you. If you are a senior social worker in Kansas DCF you are making about $80,000 a year and possibly more. Not exactly like minimum wage.
I have heard, so it is conjecture an not a fact at this point, but if you are a DCF social worker and get elected to the Kansas Legislature they let you "double dip" and get about another $20,000 a year, plus double funding of your state pension, with no oversight. That means that you work for DCF and you get to vote on DCF funding and how salaries are determined.

The girlfriend is pretty hot in a emo/goth/steampunk kind of way...

you pegged it 7 :37 am !!! I don't care what race or gender. I call a Spade a Spade and demand justice for the victims not the evil POS's.

My God what a beautiful child. The angels weep. The taste of ashes are on their tongues. The murderer does not deserve to breath air.

It honestly sounds like a meth or harder drug binge these two sub humans did and must have abused her to the point of leaving her unconscious or even killing her while they both panicked. My gut is saying the girlfriend was the mastermind. You can just tell by the cunt's eyes in the mug. And the dad just went over with it. New spouses have an influence that guys tend to underestimate. Fuck, it's why a "simp" is the new lingo nowadays. Step parents are usually evil. I didn't say ALL step parents now did I? But as previously said, this girl didn't have a chance with bio mom in prison as well. We need to have a license to breed. I wonder if this doesn't spark up the a-word debate again. Why bring an innocent child into this world where they are soon tortured afterwards? The girlfriend/spouse resented her and made the dad go against his own blood. I mean, he did get her name tatted on his face.